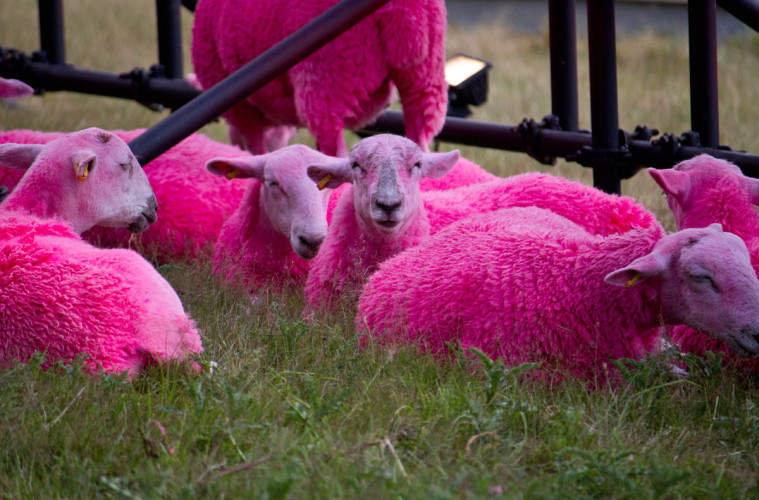 Nothing says summer like forgetting to put sun cream on and ending the day looking like Larry the Lobster’s long lost, human relative. Yet going to Latitude for the first time is a real eye opener to what summer really should be. Being a first time go-er and only knowing of it for being ‘indie’ and ‘family friendly’, I never really knew much else about it and how until now I see why it attracts families but also older ages. So why is it known for those two things? 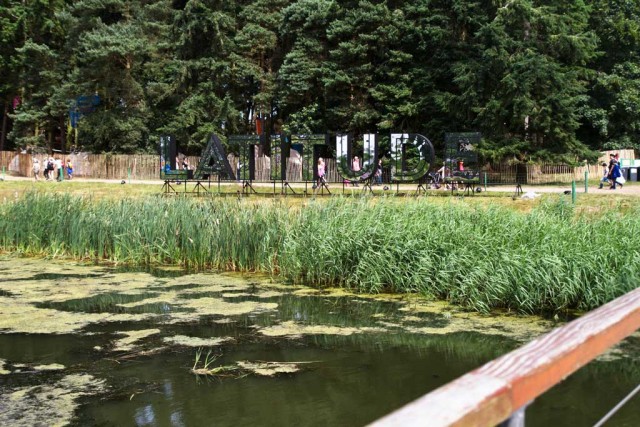 There is a tremendous diverse range of activities to do there. Such as, joining in a dance lesson, booking a yoga session in a lovely teepee, or receiving a massage. Whether its tarot reading that takes your fancy or going to a photo booth with flowers painted on your face from another stall there, there is a lot to choose from spread around the fest! However, to my pleasant surprise, one could say Latitude is very hospitable to all kinds of people of different ages and personalities; whether you’ve come in a group or by yourself, Latitude has so much to offer, it’d be hard not to find something to your taste!

The festival is set in a beautiful, rural setting in Suffolk which Latitude work well with paying attention to detail, creating a colourful wonderland. The work put into the presentation is set out wonderfully as everything around the area draws you in. Not only do they use the space but they work into the surroundings also. In part of the woodland is the ‘faraway forest’, when entering it, to the right a large tree was filled with bright yellow roses attached to fairy lights, contrasting with the dusty dark brown bark. Brightly coloured pom poms wrapped in and around the other trees in the woods. Dangling transparent stones in the shape of a heart hung from the trees. Creative and imaginative ideas and things to see were spread around the forest. A little shed with anonymous writing all over it, in different handwriting, which down to interpretation, seemed to tell a story in a chain reaction way due to different peoples perspectives. Drama sketches, a mini bar, a band stand with more fairy lights around it filled the air with classical music as you walked past, following into another part of the forest where loud, lively music played from the disco part. A man dressed as a pixie sat still until someone popped money into his hat, he would burst into song on his guitar, abruptly with no warning grinning with glee. It had a magical atmosphere, taking you away from everyday life. I felt like I had stepped into a fantasy land filled with artistic, fun energy. 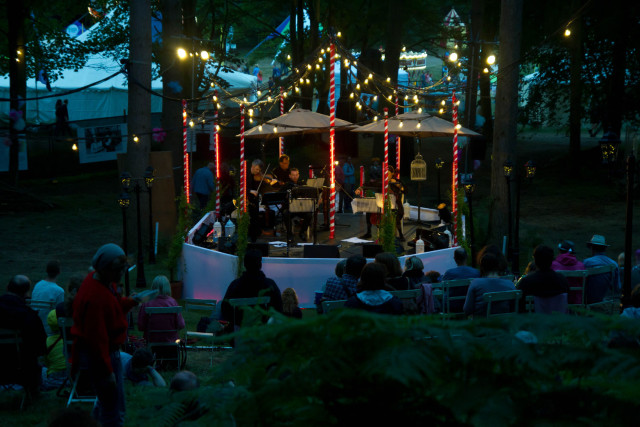 Some people go to Latitude for the comedy, literature and poetry tents. There is so much more to Latitude than music which personally I hadn’t known about until I went. The two short descriptions of it being ‘indie’ and ‘family friendly’ does not do the wide range of wonders at Latitude justice. The decor used in the literature part was made to look like giant books piled on one another that can be sat on. It reminded me of Alice in Wonderland by C.S Lewis, where the main protagonist Alice is small and items that are usually hand held become life size which gave a similar effect. Moreover, this added to the feeling of being in a magical world far away from our everyday lives!

Another highlight to the literature area, for me was Dylan’s Mobile Book Store, which is in the top 10 independent bookshops by the Guardian. Outside it had a tent with frames of quotes that were for sale and a bench with four typewriters on, welcoming people over to type out a poem and leave contact details with the chance of winning a prize. Intriguing and different, that’s what I loved about it. They were so friendly and welcoming, adding to the loveliness of the enjoyable experience! You can check them out of Facebook at: dylanmobilebookstore.

Furthermore, in addition to the things to do and see, there were brightly painted informative signs spread around the woodland and arena. They pointed to different directions of the desired spot to venture towards adding to the adventure-esque atmosphere. There were also boards which had holes in for you to stick your head in and have a photo, like the kind found at the beach giving off an all-round summery vibe. The illustrations on these were funny, quirky and psychedelic images and were scattered through the woods amongst abstract art to look at. 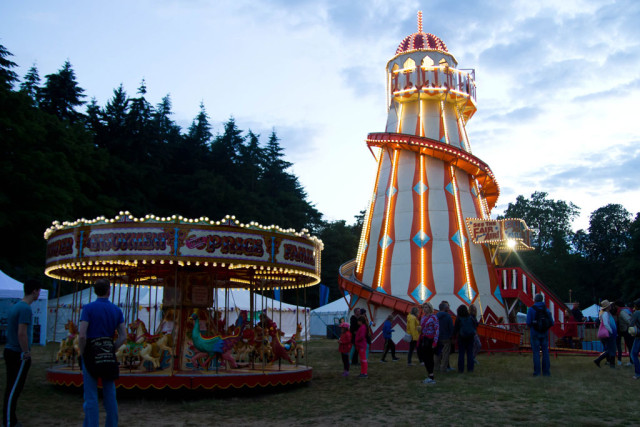 Latitude provided a wide range of food stalls to choose from, from your standard easy to go burgers to paella, to yummy vegetarian and gluten free options to strawberries and cream. Shout out to the people who had to work under pressure in the sweltering heat all weekend, they gave great service and maintained their friendliness and positive vibes with the occasional dancing here and there.

Plus side to the boiling heat was the option to go swimming in the river, they even supplied swimming costumes if you didn’t bring your own! Fat face had a quirky stand next to the river, including a cardboard cut out of a Polaroid photo, that people could stand behind holding flippers, a fluorescent green blow up frog, goggles or/and a beach ball. Punting across the river in the sun was also available. The people using the pole to push the boat along were dressed up in a traditional style of a straw hat with a black ribbon around, a black and white striped top and shorts, almost taking you back in time. The little details mixed in with the main attractions, really showed how far Latitude pushed the boat out, pardon the pun.

Now, on to the music! Latitude is good for finding new bands to listen to. As I was sitting by the lake for a moment, I could hear music blaring from the Lake Stage. I could hear of a strong female vocalist over the sound of upbeat instrumentals, I walked over curious to see who it was. They were unfamiliar to me but instantly likeable. At 5.20 on Friday, ESTRONS took to the Lake Stage. The lead singer is Taliesyn Kallström, Rhodri Daniel on guitar, James Keeley on bass and Hugh Parry on drums. The band’s name ESTRONS come from the words ‘aliens’ or ‘strangers’ in welsh. The Welsh band killed it on stage, electric high energy pulsed from them into the crowd. Definitely one to watch if you are into indie-rock with badass female vocals.

Later on that night, Grimes played the BBC radio 6 stage from 10-11pm. To sum Grimes up, I’d say the sound is a mixture of 90s rave meets elements of witch house vs. crystal castles mixing into a bit of Die Antwoord and a splash of Japanese culture. Or one could simply say electro-pop. However, as a long time fan, that’s how I would describe her! A dancer came on stage first, then followed Hana Pestle (Grime’s backing vocalist but also a solo artist) and Claire Boucher, a.k.a Grimes. Posing their arms with graceful movements as smoke appeared with bright green, blue and pink lighting onto them. Half way through the set they held their own green strobes whilst performing. It was a fantastic set, performing in high energy all over the stage, whilst still looking utterly weird and beautiful visually.

On Saturday, Daughter played from 5.05 till 6 in the early evening at the Obelisk Arena (main stage). She was wearing a black mesh shirt on with floral, leaf like shapes on in block colours, I feel like her clothing adds to the subtlety and softness that is daughter. She sounds just as amazing live vocally as she does on her records. She was so graceful, humble and adorable towards her audience, smiling and laughing in parts towards the crowd. She appeared genuinely happy to be playing Latitude to a crowd who came together for her/the band in unison, and singing her lyrics back to her. The band was so thankful and appreciative, and hypnotic to watch live. I was ecstatic to see Daughter live finally.

On the Sunday, 100 Voices of Gospel were the secret/surprise act on Sunday afternoon at the Obelisk Arena, performing in the rare, intense heat. They were amazingly uplifting and so alive. They were interactive with the audience, as they got us to raise our hands when they sang the word ‘shine’, which ended up being throughout the entire song but it was definitely the best exercise I have ever done and this is coming from someone whose main source of exercise is walking down to the local shop for tobacco! They were absolutely brilliant and brought utter joy to the crowd, who built up as they were on stage. Two dancers came on stage to join them, they were enjoyable to watch as well and the backing instruments were great and powerful too. The female vocalist who led it had an incredible range but as a whole, the entire group gave me goose bumps. 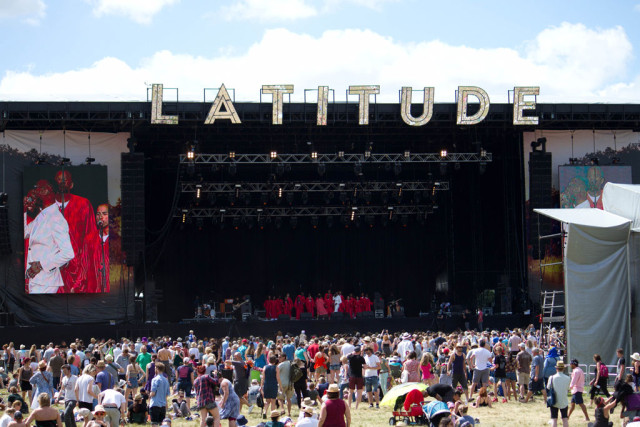 Access to music were on the Inbetweeners stage in the forest. It’s really good of Lat to have Access as it supports young, upcoming bands and artists and enables them to perform on a platform with a different setting, mixed crowd, a huge opportunity to play at Latitude and gives them a feel for it. The standout act for me from Access to music, though all of them were talented, was Jay Singh (solo guitarist). His plucking and fingering skills on the guitar was insane. It was mesmerising, I couldn’t stop watching and listening. He was extremely talented on guitar, impressive and admirable. He had a very likeable personality and introduced each song with some history behind it, short and sweet but very funny and witty. He smiled at the audience, was nice to see that he was enjoying himself as much as the crowd.

Overall, this has been a magnificent weekend; it’s unbelievable and so worth the money. I will definitely be returning to Latitude next summer for the many spectacular aspects and acts. 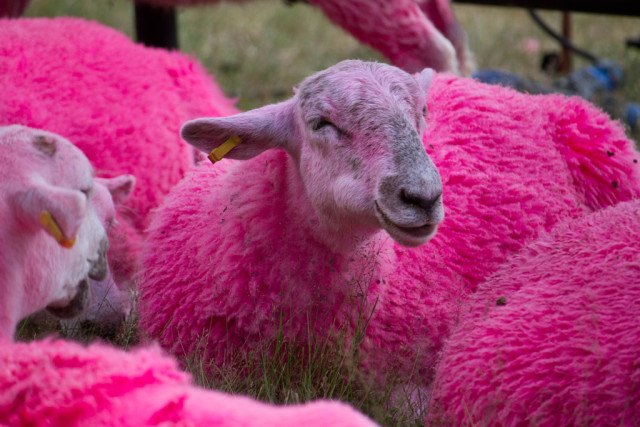