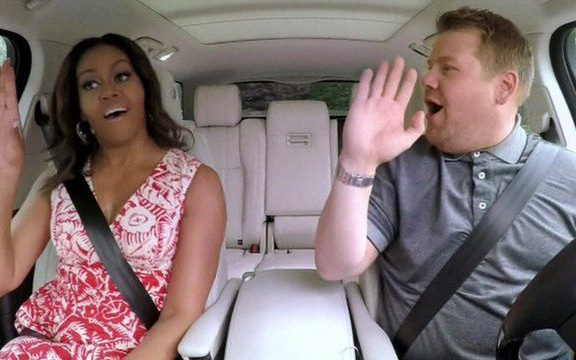 First lady Michelle Obama took some time out of her day to join James Corden for one of his famous Carpool Karaoke videos.

If you’re unfamiliar with Carpool Karaoke (which I’m sure you aren’t) it’s part of The Late Late Show with James Corden where he will drive around with different celebrities, doing a small interview and singing along to their songs and other peoples songs and they just make you realise how good these singers are, past videos include Demi Lovato, Nick Jonas, Selena Gomez, Adele, Justin Bieber and loads more! If you haven’t watched them, I highly recommend it.

This particular video includes Michelle Obama singing along to Beyonce and Stevie Wonder and even includes a surprise appearance from Missy Elliott, the three of them sing ‘This Is For My Girls’ and ‘Get Ur Freak on’. They even speak about the reason Michelle Obama got Snapchat, they will be going on a big important trip that will be broadcast on to Snapchat, she speaks more in depth about the trip in the video. Her Snapchat is ‘michelleobama’ then she has the little sassy girl emoji, I love it.