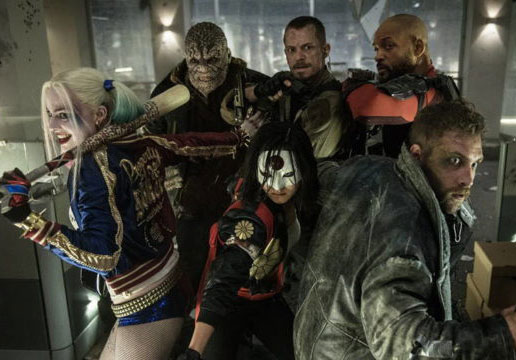 ‘Introduce a little anarchy, upset the established order and everything becomes chaos – I’m an agent of chaos,’ proclaims the late Heath Ledger’s Joker in The Dark Knight. Pretty much every character in Suicide Squad, the latest foray into the dark, grim DC Comics Universe, is an agent of chaos. Mentally unstable former psychiatrist Harley Quinn (Margot Robbie), crack-shot hit man Deadshot (Will Smith), fire-summoning gangster El Diablo (Jay Hernandez) and Australian thief Captain Boomerang (Jai Courtney), among others, all have a claim on either madness or badness. So it’s a shame, then, that very little is off-key, unpredictable or extraordinary about Suicide Squad.

The world these people inhabit is a grimy, gloomy, uncertain place in need of heroes. So, naturally, the authorities turn to the villains, to murderers, thieves and arsonists, to save the world. Thus the Suicide Squad, the twisted twin of the Guardians of the Galaxy, is born. Featuring the self-styled ‘bad guys’, this film could have been a real break with the predictable past – these villains could have made Suicide Squad into its own fun, crazy animal.

It’s too bad, then, that DC Comics’ attempt at a kooky team-up film is as chaotic and messed-up as its protagonists. Its derivative, predictable destruction-of-humanity plot seems to have been written in a rush by writer-director David Ayer, coming across more as a haphazard collection of scenes than a proper story. Similarly, the film’s tone is also all over the shop, unsure whether to mock or empathise with its characters. Suicide Squad is an incoherent mash-up of action film, comedy and character piece, without being particularly good at any of them.

Most of the film’s supposedly edgy characters are also barely ever fleshed out. Very little is done to make us invest in them, and as a consequence they are either invisible, with a line here or there to remind the viewer of their existence, or a walking cliché. Their sole purpose seems to be to speed the film towards a fairly twee and undeserved conclusion, which has not been built up to in any conceivable way. This is the main problem with the members of the Suicide Squad – when it comes to the crunch, you just don’t care about them.

That said, there are some saving graces. Some characters get the odd moment of humour, and Smith and Robbie put in good performances, doing the best they can with what they have, and actually looking like they’re enjoying themselves too. Jared Leto’s portrayal of the Joker is also interesting, and his hints of pure, crazed evil make him by far the most interesting character on show. It’s a pity that he’s not in the film often enough to make an impact, and that the figures we’re left with, sadly, are so dull in comparison.

Suicide Squad, then, is very much a tale of the bad, the good and the ugly, in varying proportions. This is not to say that it’s a wasted film, or that it is not entertaining at all – there are some funny moments. It’s just that they’re so overridden by a whole wave of sound and fury that they’re often drowned out. The Suicide Squad, a term which is mentioned only once in the whole film, are not a Squad. They don’t function as a proper team either, but at least they will have time to develop, as they may well return to our screens yet. If nothing else, in a funny sort of way, if you accept Suicide Squad for what it is – a mess as manic as its central characters – then you may just enjoy it. But on this evidence, it will take a push, a shove or a kick in the gold teeth to get me to watch these agents of chaos again.