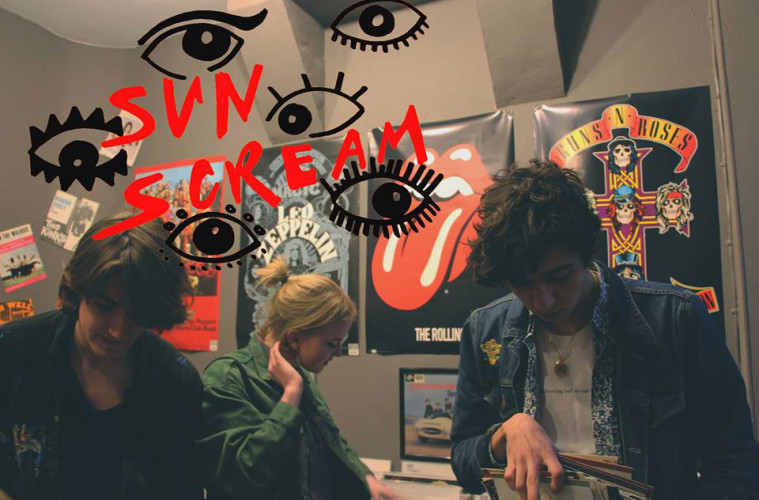 Despite their busy and youthful schedule, I finally managed to pin down Sun Scream for a quick e-mail interview – the ‘surfey-psychedelic’ 5-piece who seem to be picking up a bit of intrigue in Bury St. Edmund, Suffolk.
Following the release of their new single ‘David Lynch’  through Sounds Like Music, I was just dying to probe them with a few questions. I’m a lover of the work of David Lynch, and it seemed like this band were after my own heart.

David Lynch was our first real exposure to surrealist filmography, Eraserhead warped and twisted our fragile young minds! How that fits into the context of the song we have no idea, it was simply one of those spontaneous moments where the chords came first and then the lyrics naturally followed. But the theme of the song definitely fits into the natural sound and aesthetic of Sun Scream – which appears to be a homage to everything that we love in life in a musical format.

So following the release of that live video, are there any plans to release more material? There’s a few pictures of you at The Crypt Studio, so you’ve gotta be cooking something up… If so, what can we expect?

We had a great time at The Crypt recording a double A side EP which we’re really proud of and excited about. We hope to release that in the near future, but also get it out there with a ton of artwork and a music video. We really want artwork and imagery to be an important feature of the band as well as the music.

You’ve been playing some shows in London and in & around Bury, but are there any plans to branch out to other areas across the UK?

We definitely have a plan to branch out further than our local area – a lot of promoters who dig psychedelic pop and rock seem to really want to put us on. The idea of playing in cities and towns we’ve never been to is pretty exciting and hopefully people will dance along and get wavy with us.

And lastly, I’m really interested to hear your main influences.

Main influences are mainly contemporary bands in honesty such as Tame Impala and King Gizzard and the Lizard Wizard. But we find ourselves listening to disco and funk mostly as a collective group. George Clintons Funkadelic, Moto Town Records, and who can resist a bit of knee shaking to Chic.

Definitely keep an eye out for these guys if you’re into local, grass-roots music because it sounds like they’ve got some good stuff cooking up in the kitchen. And who knows, you could be lucky enough to catch them live. I know I want to.