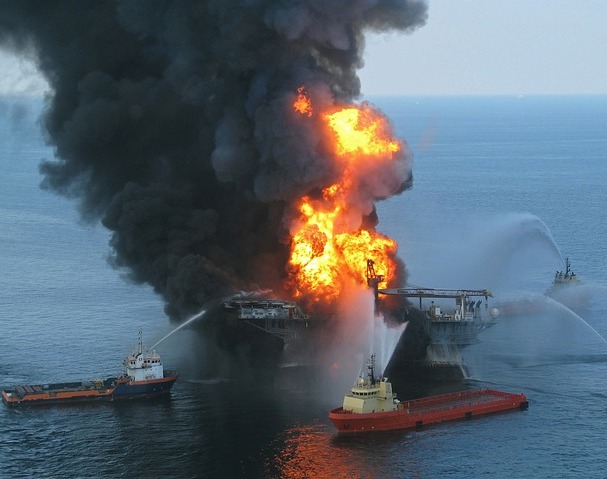 For many, director Peter Berg will be forever associated with Battleship – the 2012 action blockbuster in which any sense of character or narrative was swamped under waves of special effects and explosions. Oh, and the bizarre appearance of pop star Rihanna who occasionally muttered one-liners whilst shooting aliens.

A year later, Berg went on to direct Mark Wahlberg in the war film Lone Survivor. Fast-forward to 2016 and he has again hooked up with Wahlberg and returned to the ocean, this time in Deepwater Horizon which follows the real-life events that resulted in the worst oil spill in the history of the United States. The event was an environmental catastrophe but the human tragedies which unfolded on that April night back in 2010 are often forgotten. Deepwater Horizon is a compelling account of the spill which left eleven men dead.

There’s little doubt about the identity of the villain in Deepwater Horizon: BP. In a “you couldn’t make it up” twist, on the day of the disaster, a few bigwigs from the petroleum company were visiting the Deepwater Horizon oil rig to celebrate its safety record. In the film, this ironic committee is headed by John Malkovich who, in a rather manic performance, pressures the rig’s workers into restarting pumping oil from the sea bed, in spite of several safety concerns. Time, after all, is money. Such a decision, of course, leads to disaster, and the film follows engineer Mike Williams (Wahlberg) as he battles to save both his own life and the lives of his fellow workers.

The film opens with the fairly standard disaster film characterisation which is meant to make an audience care about the characters over the coming two hours. We see everyman Mike at home with his wife (played by Kate Hudson) and his daughter, who would like nothing better than for her dad to bring back a dinosaur fossil from his explorations at the rig. This backstory is competently outlined and, it turns out, is the deepest characterisation of the whole film. Once on the rig, we’re given brief, thumbnail sketches of the other characters, enough to work out that Kurt Russell is the father-figure of the rig who objects to being ordered about by BP’s executives, and that Gina Rodrigues (giving a nice performance) is the rig’s only female worker.

What the screenplay reveals in more depth, in contrast, is the technical jargon and physics of oil rigging. You’ll leave the cinema knowing a lot more about negative pressure tests, blow out preventers and kill lines than you ever thought you would. This exposition-heavy first act does surprisingly well to racket up the tension and anticipation of the eventual disaster, which comes as a very abrupt explosion of mud and oil. The resulting fireball which engulfs the floating rig is realised with great realism, and the sound design, too, brings events sharply – and horrifically – into focus.

Once fires have begun to rage, the action is sustained well and Wahlberg makes for a strong lead, especially in the more emotionally-charged scenes. Peter Berg has, rather surprisingly, reined himself in in terms of both the special effects and the film’s ending which, rather than saccharine reunions between rig workers and their families, chooses to focus on Wahlberg collapsing on the floor of a hotel, the shock and pain of events overwhelming him. This is nicely handled by Wahlberg, and Kate Hudson also gives a powerful performance.

It’s a cliché that characters in disaster films always talk about their family left back at home, but in a chaotic, but moving scene, towards the film’s end, Wahlberg literally shouts at Gina Rodrigues’ character about his need to see his wife and daughter again. This is the real and distressing human dimension of the disaster and gives the film its raison d’être.

The environmental costs of the BP oil spill were, of course, massive. Equally emotive are the stories of those who worked on the rig and Deepwater Horizon tells their story with sensitivity. The special effects carry a weight to them which is underpinned by the great performances from the cast. Fundamentally a tale of corporate greed, this is a worthy cinematic tribute to those who died.