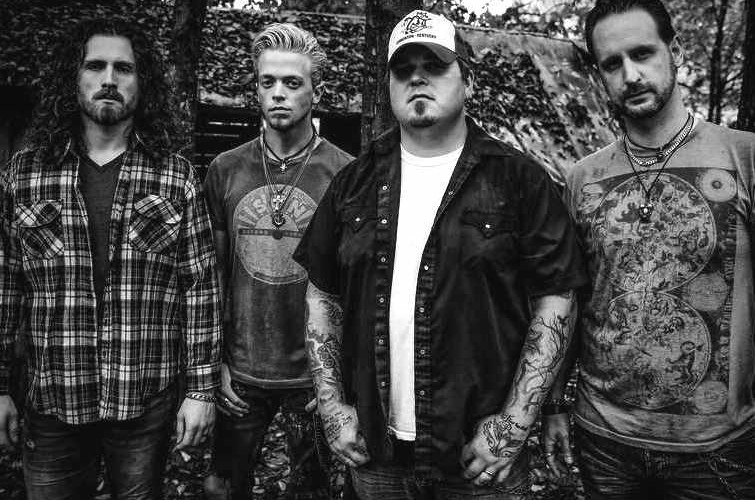 We were lucky enough to speak with Black Stone Cherry frontman, Chris Robertson, about their most recent album, Ramblin’ Man Fair, and their upcoming UK tour!

Hi Chris! How are you?

Nice! So, you released your most recent album ‘Kentucky’ this year back in April, why did you name it after the location you formed the band?

I mean, like for us, yanno, we had a new record label and we went back to do this record with the same engineer and the same equipment in the same town, it was just kinda like a “coming home” kinda thing. We went through, like, 16 different titles and someone said “Why don’t you just go with Kentucky?”, and it stuck and we were like, that makes more sense than anything. It brings everything back full circle.

Yeah! How would you say ‘Kentucky’ differs from your last album, ‘Magic Mountain’?

Um, the biggest thing is fact that we produced it on our own, yanno? We didn’t work with any producers or anything this time. It was just the four of us in the studio and the engineer, and yanno it was just literally the most honest and truest representation of our band we’ve ever been able to capture on a recording, yanno, other than live recordings. Nobody telling us “I’m not sure about this”, there was no worries, no record label to say “That’s not a good song”, we just did the songs that we felt were the best songs and the best representation of who we are and it worked out, yanno?

I wanted to ask you about ‘The Rambler’, it’s a very emotional song it’s quite different to your normal stuff so what inspired you to write that?

That song was actually written by a couple of other guys! And it’s kind of a weird deal around that song, we were shown the song by someone else, anyway, long story short, we come to find out that after we recorded it and kinda re-written part of the song, uh, someone else had already written it like the person that told us they wrote it…but when we heard the song we we’re just like, “Jesus, man. That’s one of the most incredible, heart-felt songs”, and we kind of adapted it, yanno, and wrote our own lyrics in certain spots and changed some things and melodies and stuff from what we originally showed, which was…yanno, it’s awkward! That song is a beautiful song that really means a lot to us especially after all the crazy stuff we went through. It’s just a song that kinda spells out exactly who we are and we do.

That’s amazing! Talking of ‘The Rambler’, you closed your first festival earlier this year at Ramblin’ Man Fair!

That. Was. Absolutely. Incredible.

I was there! It was amazing and I cried my eyes out, to be honest!

Ha ha! Thanks, thanks! For us, man, it’s like, that was one of those “pinch me” moments! Like, “Are we really here doing this?” We’ve been very fortunate to be able to headline here and now we’re doing it at UK arenas! To be asked to close up a festival that White Snake closed up the night before and, yanno, for us to be the band to close up the entire festival, and to see the reaction from the people, and just how many people that were there watching us, man, was absolutely amazing! It’s something we’ll never forget, it’s kinda like your first kiss, or your first time with your other half, yanno, it’s one of those things you will never forget. One of those things that was so amazing that you almost think it wasn’t real. We’ve all had our first kiss and it’s very much like that, no matter your feelings now towards whoever, it’s still one of the most amazing moments of your life. The first time you did something on your own, yanno? That’s kinda what headlining that festival was like, it was surreal. It feels right, but also feels wrong? Like, “Are we really gonna do this?” Basically, it’s like the first time you have sex, really, you can never forget it!

I have to admit, you seemed incredibly calm up on that stage! You got up there and you just did it!

Yanno, we’ve been playing music together for 15 years and touring for a little over 10 and I still get crazy nervous. I try not to show it but the Bourbon helps that a little bit, ha ha! A couple swigs of that and it will calm you right down! It at least gets you back down to where you feel like you can conquer the world! I don’t know if it calms me or just gives me that “I’m bulletproof” thing. But, I definitely had a couple swigs that day to calm the nerves, ha!

Ha ha! It was a really emotional show, how does it feel having such an emotional impact on your fans?

I really don’t know! I’m, uh, I’m humble about it! That’s one thing we’ve always been, we’ve just already tried to be us and not put up any kind of flags or anything or try to be anybody other than what we are, I mean, I’m an emotional guy, I’ve cried, when a kitten is born, I’ll cry! I just try to go out there and be the person I am, as all of us do. I see so many guys that have their routines and their ways they work the crowd and it’s amazing. I am just infatuated with watching other bands. They each have a way of captivating a whole crowd; the way they talk, the way they move. Guys like Steven Tyler are amazing frontmen, they all do it in such a different way and none of those guys play guitar, but, they all do it in a different way to where they’re like this superstar guy on stage and that’s not just my way of thanking and doing stuff, I wish it was! For me, it’s just go up there, play guitar, sing, and be honest and yanno, no bullshit. If there’s an emotional spot in the show for me, I don’t try to hide it! I’m not good at hiding my emotions, yanno!

You’re doing some smaller shows in the UK soon for your ‘An Evening With Black Stone Cherry” tour. What made you decide to go more intimate?

Some of our fondest memories are playing some of the smaller venues, don’t get me wrong, I love playing the big ones, I love playing all the arenas, they’re all amazing. But there’s something about breaking down that barrier and being so much closer to people and just getting that vibe of where the crowds louder than the PA at times. We’ve always wanted to do “An Evening With” where it’s just like nobody but us and we got it back on the Southern Hospitality tour back a few years ago but this one’s gonna be more special because we’re actually gonna be playing 2 sets. We’re thinking of doing an acoustic portion, and then taking a short animation, and then doing a full blown electric – yanno, what people expect from us! The thing that gave us the idea of breaking it up into 2 sets was our book manager saying we should do a set of covers, and then do a set of our own stuff. And we were like “That’s kinda cool!” we can get up there and do some blues tunes and all the songs we’d like to play… So yeah, we should do an acoustic and then an electric set and just have some fun! There are songs we have never done before or new versions of songs we’ve never done before, yanno, take some of the songs and make them acoustic. Like the song ‘In Our Dreams’, I love the acoustic version of that. It’s hard because you’ve got me wanting to take some of the heavy songs and make them cool and acoustic and way different, and Ben is like “No dude, we’ve gotta have those heavy ones, man! We gotta kick ass!” We’re trying to figure out the setlist and stuff like that now. Maybe do a cover of two, but I promise we’ll do some songs no one has ever heard live.

Awesome! What do you love most about being on tour?

The thing I love most about being on tour is, number one, the time on stage. And the other thing is hearing how we’ve impacted people. Whether it be, after I spoke about mental health, someone then went to go get help for their issues, or somebody wants to play drums because they watched John Fred or anybody for that matter. Just hearing how we impact people, any positive impacts on people, is probably the greatest thing in the world while on tour. Being on stage is probably a close second…

Uh, I’m literally sat on my front porch right now in Kentucky. I live in a town that has 1600 people… I don’t even live in town! Within a mile of where I’m at, there are like 4 families. So, I kinda live out in the woods, but, just to be dudes from a small town that have been able to write songs that mean something to people and they wanna sing those songs back…that’s the craziest thing. That I get to wake up everyday and still play music! I’ve been doing it for the last 10 years and there’s so many bands that come and go…and we’re still going! We’re still going and things are getting better for us all the time!

We’re gonna finish off with some quick fire questions!

This is always fun.

What’s your favourite place on Earth?

Kentucky! My front porch is my favourite place on Earth.

One thing you can’t live without?

Your most embarrassing moment?

I forget the words to songs I’ve been singing for 10 years a lot. We were doing one of the arenas on tour this earlier year and I totally forgot the words to ‘Soulcreek’. That’s probably the most embarrassing thing that happens, that and I really get to stuttering on stage!

That’s the nerves! Thank you for talking to me!

No problem! Thank you!

Have a good rest of the day! Thanks!

You can get hold of tickets for Black Stone Cherry’s UK tour here: http://www.livenation.co.uk/artist/black-stone-cherry-tickets