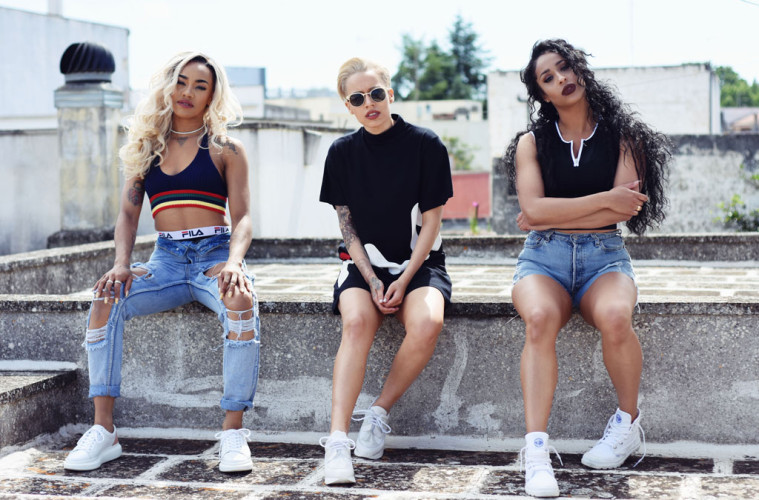 We spoke with the lovely ladies in Stooshe about their new album, tour plans and making a video in Italy!

Hello! How are you all?

Hey, we are good!

You’ve been away for quite a while, what have you been up to?

We have been in and out of the studio, working really hard working on a second album.

Your single Let It Go was released at the end of June, and it has a very different sound to your older music, is this new sound what we should expect from your future releases?

We still have some of our motown influences because we love motown and that sound but we wanted to switch it up a little bit, we are three young girls that love to go out and party and we wanted to have a bit of that in our new album so we have a pop track, a reggae track, Let It Go is more of a drum and bass feel, we have a power ballad, we just wanted to show all of our personalities and made a little bit of a change.

The video was filmed in Italy, did you get much time to explore and have a bit of fun?

I think the most holiday that we had was sneaking off in each other’s scenes to go and explore the caves and things like that, we didn’t really get any days off, we were up at 5am and to sleep at 12, it was a lot of fun though! We just enjoyed every scene and we loved the weather out there.

How long did it take to film?

We were out for 5 days and we were shooting 4 of 5 days, we wanted to get a lot of scenes in.

You’ve been doing a lot of acoustic performances of Let It Go, is it hard to change such an upbeat song into a slower performance?

Sometimes we prefer our songs acoustic, I don’t think it’s hard to change it; it’s just a different kind of vibe. The guitarist and Cajon bring a different element to it but they still bring in the drum and bass.

Is your album finished or is it still being worked on?

It’s almost finished, I think we have a few more songs that we would like to write and add to it but as you get closer to the end you always want to add more and do more because we are kind of perfectionists right now so yeah, we’ll see! Almost there, we just need to put our Stooshe stamp on it and then it’s out hopefully January.

Is there a theme behind the album?

It’s basically us and our fans and our journey over the last couple of years, what we’ve been up to, our friendship, just loving life and living free, that’s the main message.

Do you have any tour plans?

Definitely after the album, we want to go around the country and then take it around Europe as well.

If you had to choose someone, who would you most like to tour with?

I think all three of us would love to tour with someone like Beyonce or Rihanna but we are happy to tour with anybody, we did a tour with J Lo and Nicki Minaj and they were amazing experiences and just tour life in general is great.

You’ve played quite a lot of Pride events, why is it so important to you guys to support the events?

It’s really important for us to play our part, it’s an amazing thing to celebrate love and our album is predominantly about love and it’s just always an amazing event. We always know that it’s going to be good gig when we play pride and we just enjoy spreading the love.

What are your favourite albums at the moment?

Alex- I recycle a lot of albums, quite old school ones, nothing specific.

Karis- I’m trying to look at my iTunes, I like DJ Khaled’s album because he’s got loads of cool features on there.

What TV shows are you all watching at the moment?

Alex- I watch reality TV shows all the time, I don’t really watch TV, I just watch my laptop. Real Housewives, Power, TOWIE, Made In Chelsea, everything!

Courtney- I’ve been watching a lot of Netflix at the moment.

Karis- Alex got me on to the reality TV shows so I’m just like her now, I don’t stop watching them on my sofa with my iPad.

What advice would you give to students that are starting uni this month?

Enjoy the new experience, enjoy the first few weeks as much as you can because uni does get very hard so as long as you leave time to revise and work hard, you definitely need to have a party as well because I went to uni and I definitely partied for most of the two years but yeah, work and party hard.

Finally, just to summarise, what is next for you?

The album comes out in January, hopefully going to do a tour, Let It Go is out now, we are going to try and give a visual EP or something that the fans can have before the album!

Thank you for your time! Bye!

Nice to talk to you! Bye!