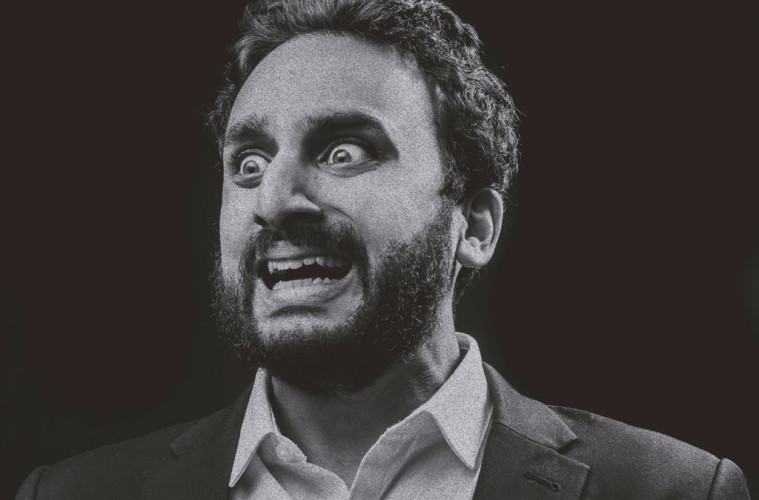 We spoke with British stand up comedian Nish Kumar about his tour, Newsjack and getting forcibly removed from a castle.

Hey, how are you?

Let’s start with your tour! You’re touring from October all the way through to the end of December, is it hard doing such a long tour?

No, I don’t go straight out and disappear for 2 months, it tends to be 4 days away and a couple of days at home so it’s not as relentless as it might be!

That’s not so bad then! Is every show different or do you tend to stick with similar content for the whole thing?

What is the topic of this tour?

A lot of it is politics based, there’s some stuff about music and going to gigs when I was a teenager but most of the show is about gentrification, history and a response to the referendum so I guess to slightly change my answer to the last question, things might start shifting depending on what happens with the political situation.

To some people the topics that you speak about can be controversial, do you get people complaining?

Not really in the live shows, I’m quite a relaxed guy so I’m quite happy if people have an opinion that they wish to voice within the room, I’m happy to hear them out, I have done that on a couple of occasions, that’s the joy of stand up, it is a kind of give and take with the audience but I don’t get people reacting badly, even if they disagree with me they tend to do it in a respectful way. I think if you really hated me you probably wouldn’t fork out £15 to sit through 80 minutes of me.

That’s true! You’re the host of Newsjack, in which anyone can submit a sketch, is it something you enjoy?

Yeah I love it, outside of stand up it is my favourite job that I’ve ever done! It’s great, I like the pace of it because it gets written and put together in 3 days, I think that’s very exciting. I also really like the element of bringing in new writers. It’s a brilliant way to find new and exciting comedy writers, I’m really proud of what the show is.

What exactly do the writers get out of this opportunity?

Well in the short term they get radio credit and they get paid, because it’s the BBC, if you do anything for them you get paid for it, so if your sketch gets recorded you get a certain amount of money and if it gets put on the air, because we record more than we need to and some gets edited out for time, you get I think another fee on top of that and you get your credit. It’s the way that radio 4 looks to find new comedy writers to work on shows like The News Quiz and The Now Show and then people that have done that then go on to write their own shows and write on television shows like Have I Got News For You and Mock The Week.

What’s your most embarrassing moment?

There’s so many to choose from, it’s very hard, I guess a funny one is two weeks before I left university I was forcibly removed from Durham Castle, which was a funny one.

We were trespassing but we were in a castle and ended up being chased around by some security. It was a college ball and we had outstayed our welcome, we were performing there and we were supposed to leave after a bit and we decided not to and I ended up being forcibly removed from a castle. I say that, I’m kind of proud of that one.

If you were given the AUX cord, what would you play?

I just brought Frank Ocean – Blonde, I really like that so I’m playing very little else at the moment.

Finally, what’s next for you?

On tour and then I’m making a travel programme with a friend of mine called Joel Dommett where we test his physical fitness against people like the Maasai in Kenya and the running tribes in Mexico, I’m basically going on a gap year with my friend but I’m being paid to do it.

Sounds cool! Thank you for your time, really appreciate it!

No worries, thanks, bye!