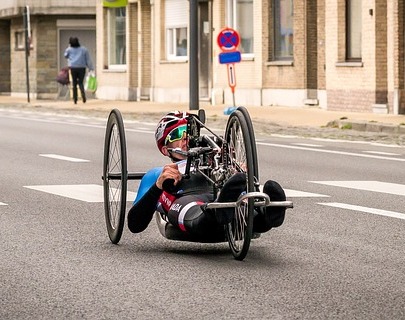 Perhaps this is the most fitting tribute to the Paralympic Games. They are the words of Ibrahim Hamadtou, an Egyptian table tennis player with no arms, who serves using his left foot and holds the bat in his mouth. It is this spirit, this mindset, which embodies the Paralympics. There is much to celebrate within it, and they are every bit as much of a sporting spectacle as the Olympics. After the athletes have returned home and some have had parades in their honour, I look back at a Games to remember.

The Rio Paralympics, against all the odds, have been outstanding – even more so, perhaps, than the Olympics. The organisers came good, and those athletes who were looking doubtful for even being able to fly out to the Games due to lack of funds were able to compete. And, maybe more surprisingly, the stands were fuller and the Games overall were better attended than the Olympics. There were always excited spectators milling around the Paralympic Park, forever trying to get into shot when Clare Balding was doing live coverage for Channel 4.

That was another thing. Channel 4 once again (in certain respects) justified being given the rights to broadcast the Paralympics, after having done so for London 2012. Using disabled presenters to front the action, having a thorough system, LEXI, to explain categories of disability, and having The Last Leg as an irreverent look back at each day’s events, all proved very effective. The latter show in particular, as it was in 2012 (when it started out as a sports showcase), came to be the soundtrack to triumph. The show, which seeks to champion disability whilst also gently making fun of it, has since morphed into a topical current affairs show, but it once again found its natural home doing sport, covering Rio’s Paralympics every night during the Games.

This was a real string in the bow of the whole coverage of the Paralympics, and this kind of environment – eclectic, with a unique mix of people and a slight tinge of madness in the air – is one that best suits the show. As such, its brand of (usually) good-humoured ribbing, old-fashioned jokes and the occasional show of sensitivity worked very well. All rise presenters Adam Hills, Josh Widdicombe and Alex Brooker.

Moving on to the sport, from a British perspective, things were rosy once again. Paralympics GB surpassed their London total of 120 medals, winning 147 (64 of them golds), leading some to think that a theme of exceeding expectations may well be developing in British sport. The poster-people of the games, like athletes Hannah Cockroft and Richard Whitehead, delivered once again, despite various challenges in their events themselves. Cyclist Dame Sarah Storey continued to reign supreme, and swimmer Ellie Simmonds got herself another gold to add to her collection.

But there was new blood too, and it was very exciting to see such young talent (and older talent too) in action and doing well. Kadeena Cox, who suffers from MS, competed across both athletics and cycling at the Games, winning four medals (two golds, one silver and one bronze). Georgina Hermitage had been out of athletics for 10 years but returned out of wanting to inspire her daughter. She came home with three medals – golds in the T37 100m and 400m, and silver in the T35-38 4x100m relay. Fifteen-year-old swimmer Ellie Robinson rose to fame with S6 50m Gold in the pool, her unintentional starting-line swagger also gaining her a good deal of attention (and likely fans too).

The men’s high jump in particular was utterly astounding. Merely seeing what these sportspeople are able to do is awe-inspiring enough. It’s almost a bonus that they do them so extraordinarily well, with the best of the competitors clearing nearly 1.9m with one leg.

It was telling, though, that those who lost, or equally those who said something amazing about disability, seemed to have equal billing with those who won. Whether in victory or defeat, it was seeing how they coped as people, not just as sportspeople, which was just as compelling. It made it a more all-around sporting experience – you felt for them in two dimensions.

But, turning again to our own patriotic corner, there was much to celebrate. After changes to her event (the 200m in her category was taken out of the Paralympics), charismatic Yorkshire wheelchair racer Hannah Cockroft rebounded in style to take gold in the T34 100m, 400m and 800m, showing her dominance in a way that made her victories never seem in doubt.

Nottinghamshire runner Richard Whitehead capitalised on having trained hard to improve his starts, extending his mastery over the T42 200m still further, as he already had an explosive finish in his armoury. He also earned a surprise silver medal in the 100m, where he traditionally does not do so well as it takes him a long time to get into his stride with his blades. A nailbiting dip for the line after he surged through the field in the last 20 metres saw him take second place.

British para-cyclist Jody Cundy redeemed his London 2012 false start by claiming victory in the C4/ 5 Kilo race, in a world record time to boot. He also further cemented his place in British Paralympic history by winning gold in the C1-5 Mixed Team Sprint, alongside Jon-Allan Butterworth and Louis Rolfe.

One of the faces of the London 2012 games, Jonnie Peacock overcame difficulties with form coming into Rio, and once again came good on the day, triumphing in the T44 100m. New celebrity Liam Malone, the New Zealand athlete with that sure-fire mixture of charm, good humour and emotion, took the silver, becoming one of the new stars of para-sport in the process.

David Weir, by contrast, was a British athlete who didn’t really perform at these Games. He had won four golds in London, but won no medals here, despite competing in five events. He later tweeted that he was ‘deeply sorry I’ve  let the country and my team mates down’, prompting Jonnie Peacock to reply ‘you dominated the whole sport for so long in one of the toughest classes’, labelling him an ‘#inspiration’.

The equestrian was another big hunting ground for the Brits. We won a multitude of medals, with Sophie Christiansen repeating her triple Gold from London. Natasha Baker, a winner in London, also won three Golds. It was as though we could do no wrong. There were many more moments over the Games, too many to mention, but this is just a flavour of the kind of things which happened on a daily basis, not just for the British team but for many others.

Sadly, the atmosphere was dimmed for a moment on the final day of competition, when Iranian cyclist Bahman Golbarnezhad sadly died following a crash in the men’s Road Race, casting a mournful mood over the final quarter of a day’s sport. But the sport, and the Games, went on.

This Paralympics was a celebration not just of sporting excellence, but also the pure ecstasy of what is possible when it seems precisely the opposite. Simply getting there is an achievement for some of the sportspeople concerned. It matters not, perhaps, where the Paralympics happen, but simply that they happen. The fact that Rio has, ultimately, provided such an inspired, at times frenetic but always humane backdrop to the action, is an added bonus.

And the images of the Games will be remembered for a long time. The important thing now is whether much can be done – or, more aptly, will be done, outside of sport, to ensure that it is possible for disabled people to do whatever they want to do, and go wherever they want to go in life. That will be the true test of Rio’s legacy, and of whether their distinctive Paralympic cauldron will be merely something that flickers in the memory, or something that spurs people on to concrete action.

But that, perhaps, is for another day. For now, let’s just remember what a glorious 11 days of competition the Rio Paralympics were, and what an unforgettable summer of sport Brazil has given the world. Obrigado.