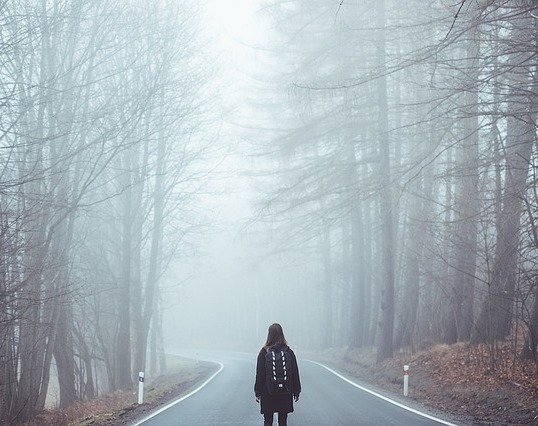 In celebration of Halloween, here are some creepy, true encounters people have had with the paranormal..

1. A few years ago one night at around 3AM my wife and I were sleeping and I feel myself slowly waking up from a really deep sleep. My eyes started lifting up and as soon as they focused on the lamp on my dresser it slid off and shattered on the floor. My wife and I quickly sat up and looked at each other horrified at the startling noise. We agreed we would clean it in the morning and went back to sleep. The next morning when we woke up the lamp was at the foot of the bed (about 5 feet from where it fell) completely in tact and not broken at all. We are still trying to make sense of it.

2.  The only one I have is when I was in 4th grade. When I was little, I would always sleep with my door open. I went though a faze where I would wake up between 3:00 /4:00 AM every night, and every single night I would hear footsteps walking up my stairs, around my living room, through my dining room, across my kitchen and down my hallway. They would always stop right before my doorway, then turn around and go back into the basement. But one night they didn’t stop, what I saw was a shadow of a little girl/boy (couldn’t tell) walk right in front of my doorway, look at me for a few seconds, then it walked away, back down the stairs.

3. When I was 5 I lived with my grandparents on a farm that was built in 1912 because my mom had joined the Army while she was single and the Army won’t let you have a kid without family. The original owners had been shot, killed, and buried in unmarked graves behind the barn. Years later someone poured concrete over the graves. Over the course of the 3 Years I lived there every single night I would hear dishes by the sink rattle and be thrown against the floor. We would wake up every morning to broken dishes on the floor. I’d also been pushed multiple times. And I used to play with this small kid that I guess wasn’t real. I would play tag with him…

4. I used to work in a B&B as a housekeeper; I changed and refreshed the rooms after they had been used by guests. The B&B used to be an old mill dating back to the 1700s and was generally quite creepy feeling, but I had worked there for over a year before I experienced anything odd.

There was one room in particular that made me feel uneasy, it was the only room that had a little set of stairs that lead to the mill’s attic through a very small door which was always locked. I used to listen to music from my iPod whilst I worked but whenever I entered that room, my iPod would start making strange noises and kept skipping and repeating songs. The lights often flickered in the room and it was generally colder than the rest. I would often leave the room to get some cleaning products and when I returned, one of the chest drawers would be open… None of the doors stayed open by themselves so I would hold them open with big chunky door wedges, but one day, I was working in the creepy room. As I went to leave, I got to the door and stopped dead in my tracks as I watched the door wedge move out from under the door as if someone was moving it with their foot while holding the door open… the door swang shut and whacked me in the shoulder in the process. I dropped everything and ran down to the restaurant kitchen and explained to the owner what had happened. He told me guests who stay in that room often make complaints about hearing whispers and voices during the night and don’t usually come back to stay again… Apparently, the ghost of a little boy and his dog haunts the whole top floor I worked on…

5. When I was a dumb kid my brother and I were playing around on the stairs. I was at the top jumping around in a pillow case. I slipped, obviously, and went tumbling down backwards. Everything went into slow motion as things sometimes do when your life is in peril. As I was flipping over and over, the back of my skull getting closer by the second to smashing into the hard concrete basement floor, I noticed a movement coming from the dark basement. Suddenly a large bag of dog food fly across the room as if hurled by an invisible hand with absurd precision, and interposed itself between my head and the floor. My skull smashes into the bag a millisecond later, spraying kibble instead of skull fragments around the room. My brother and I were both slackjawed and confused. The flying bag had traveled at least ten feet, likely saving me from death or serious injury.

I used to think this was evidence for God, or angels, or that I have some kind of purpose but I realize this is evidence for nothing in particular except that life is bizarre and unexpected things can and do happen.

This next one is a long one, but damn, it’s a weird one…

6. The story I’m about to tell is completely true, having said that there are some disclaimers I will add at the end. About three years ago I moved to the city I’m living in now to go to school. Before I moved I was living about 1400 kilometres West, working as a pump tech. The month before I moved I had to make a few trips back and forth to finalize everything – find an apartment etcetera. Anyway, what happened took place on one of the return trips.

It was late at night, and I was almost home – about two hours away. Now, this was only my second time making this return drive – and so because I didn’t have the route perfectly worked out, I was using a GPS to supplement my knowledge of the road.

I reached an area where I knew I had to make an exit, problem was I couldn’t remember which one it was. I looked at the GPS and it told me I had about a KM before my turn. So I look at the GPS periodically and gauge my distance. When I was about 500 metres from the turn the GPS did something odd. The screen flickered momentarily, and then started changing the route. The GPS now told me to drive an extra 15 km and turn off on a different exit. Now, I was in no mood to argue with my GPS, so I figured, “Fuck it, it’s calculating for the quickest route, what’s the worst that can happen?” So I comply.

I took the turn the GPS told me to take, and drove along the road for about 45 minutes with no problem. My iPod was dead so I was listening to the radio, and smoking some cigarettes, just having the best time I could possibly have alone on a highway at 3 am after having already driven 9-10 hours. That’s around the point I began entering a dense fog. This was one of those fogs where you can barely see the road in front of you, the kind where you have to kill your high beams because they’ll just blind you.

While driving through this fog I began to notice that parts of the road felt a little weird to drive on, and when I hit sections where the fog cleared… The highway was suddenly a good 15 feet above the ditches. You literally could not see the ditches on either side of the road, just the fields they climbed towards – it looked as if the highway was a winding bridge. What was worse, however, was what had been making the odd sounds on the road. Road kill. But, not just regular run over squirrel and stuff like that. It was more like somebody fed a deer a stick dynamite and then set it off. Animals had exploded all over the road, as if a semi had been ploughing into animals at an incredible speed. It wasn’t even just one or two animals either. Every kilometre had at least two exploded looking animals on the pavement, in between the intermittent walls of fog.

I looked at the GPS again, and it said that I had about 80 km to my turn off – which was a problem, because I was only doing about 60 as the conditions were absolute shit. So I suck it up and keep going.

The radio lost its signal around this point, two stations were fighting over the only frequency that seemed to be getting any signal whatsoever. I turned it down a bit and lit up another cigarette. Then I noticed a yellow glow on the road, coming from the ditch. So instinctively slowed down in case it might’ve been a deer or something. As I passed by, going about 30, it didn’t look like a deer at all. It looked as though it had hairless skin, and sort of like a dark mustard sort of colour to it. It was right at the edge of the highway too, as if peering over from the ditch. I cannot say for certain, but it almost looked human-like. Bipedal, hairless. But it’s eyes were golden, and its skin dark yellow. What was most off putting is that when I drove by it… It hunkered down, as if it were trying hide, with only it’s eyes visible. And then as I passed, it’s head turned and got up a bit again – watching me drive off. That really freaked me out. Little did I know shit was about to get crazy.

As you can imagine, I didn’t know what to think about whatever it is I may or may not have seen by the ditch, but rest assured I just wanted to get home by this point. Fog cleared considerably and the highway eventually turned into a heavily wooded area. That didn’t seem to be populated whatsoever. I started to realize there was a problem when I was about 2 Kilometres away from the highway I was supposed to turn onto… There was no apparent highway in the distance. When I got 300 metres away, still no highway. So I get closer and closer, the GPS tells me I’ll need to turn right in 200 metres. Then 100 metres. Then 50. And then… It tells me not to turn right, but to turn left instead. And this all so confusing because there should have been a highway, but all I could see was a single, tiny, dirt road.

I really should have known better… Should have known that turning down that road was a bad idea – but what else was I supposed to do? I turn left, onto this dirt road, which was more like a path. It was so narrow. My car barely fit onto it. This where the most frightening thing that has ever happened in my life occurred… The road starts doubling back towards the direction I had come from, like a half-circle, and the road is so narrow, and the trees are so thick that I can’t actually see what I’m turning towards until I’ve already made the turn. The second the turn completed, the dirt road ended and led into a small clearing. Inside that clearing? Oh, you know, just an abandoned church and graveyard. I look up at the bell tower and saw what I was, and still am, convinced was a silhouette staring out towards me… Then I look down at my GPS, and on it’s screen, were the three most terrifying words imaginable: You Have Arrived.

Well I got the fuck out of there as fast as I could.