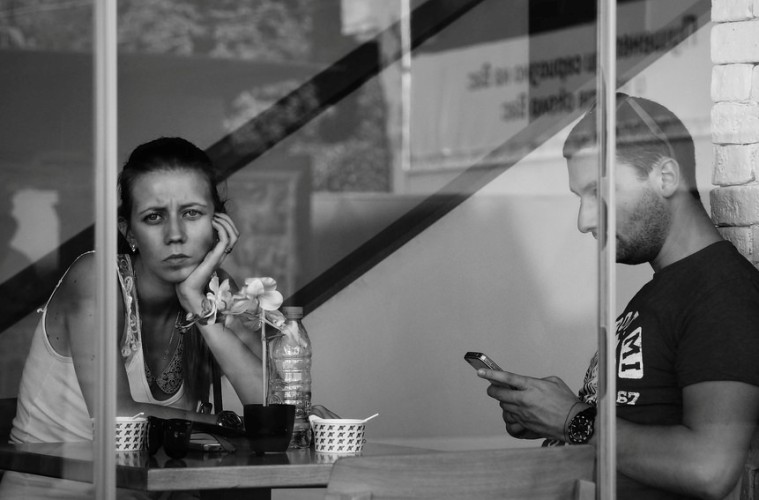 10 Awkward Breaking Up Stories
We’ve all been the dumper and the dumpee, but the break up stories will probably make you want to be single forever…

Mama’s Boy
1. “My boyfriend was a serious mama’s boy who insisted on having dinner with his mom at least twice a week. During one of those dinners, his mom looked at me, took my hand and said, ‘We have to talk.’ I got really nervous and tried to catch my boyfriend’s eye, but he was just intently staring at his lap. She gently told me things weren’t working out between me and my boyfriend, and that she thought it was best for me to leave. I tried to convince my boyfriend to talk privately in the other room, but he wouldn’t respond. I couldn’t believe it—my pansy-ass boyfriend made his mom break up with me!”

Awkward…
2. “My guy was away on a business trip for about a month, and we had been video chatting to stay in touch. One night I had my girlfriends over, and after a couple bottles of wine, we decided to Skype him. Our call connected, and I was about to tell him to say hi to my friends when he goes, ‘Bev, I’m sorry to do this over Skype, but I don’t want to put it off any longer. I think we should just be friends.’ I was in total shock, and my friends just sat there with their mouths hanging open. I mumbled okay and got off as quickly as possible—I was dumped in front of all my best friends!”

Dramatic?
3. “My boyfriend and I worked at the same very small company. It wasn’t technically against policy for us to be dating, but we didn’t exactly publicize the fact. We’d been on the rocks, so I was pretty sure things were coming to an end, but I definitely didn’t think it would happen the way it did. The day after a pretty nasty fight, I came into work to find an e-mail to the entire office announcing his resignation and the end of our relationship.”

Ouch…
4.“I went abroad for the semester, and my boyfriend and I agreed to stay together. It was much harder than we’d imagined, but I thought we were making it through. The second I got back home I drove straight to his house… only to have his roommate answer the door and simply hand me a box of my stuff. Apparently my super considerate boyfriend thought that was an okay way to break up with me.”

Dedication?
5. “I had been dating my boyfriend for about three months when he started becoming obsessed with the idea of moving to California to surf. I just kind of ignored him since he was a big talker. One day he got really annoying about it, and I snapped, ‘If you want to go, then just go already!’ and stormed out. We didn’t talk for two days, so I went over to his apartment to apologize, but all his stuff was gone. I texted him and heard back, ‘ur the one who told me 2 go. see ya.'”

Are they even a thing?
6.I dated a guy for a few months. One day, he stopped returning my texts/calls. He told me he was having “family trouble” and couldn’t talk. This went on for a few days until I found out the real reason he wasn’t talking to me: He was waiting for his breakup postcard to arrive in my mailbox. That’s right. He broke up with me via postcard. A POSTCARD.

Silent Breakup
7. Nearly two months into the relationship, we were working a high school reunion and these two guys I knew showed up to volunteer. Naturally, we, as the youngest people there, starting chatting and whatnot. The party had just started and I was the starting runner for the night, so I was chilling by the buffet tables while my ex and the others worked the buffet. At one point, I looked over at him and noticed that he was visibly irritated that I had male company. I shrugged it off, knowing that these guys were just acquaintances. Upon returning to our room, he took his laptop and went down to the lobby.

I followed him down a bit later, under the assumption that maybe we’d watch stupid videos or something. Instead, he opened Notepad and started typing. I don’t remember what was written exactly, but we had a back and forth silent breakup through a freaking word processor. A WORD PROCESSOR. We were sitting next to each other.

Didn’t see that coming…
8. It was just a few days after Valentine’s Day (where he gave me a card saying something like “I can’t believe we’ve been dating this long but I love it and you.”). We spent the afternoon together — he bought me lunch and we walked around Walmart. We went back to my apartment and he walked me to my door and before I went inside he said, “I don’t know how to say this, but…” and proceeded to break up with me. Note to all guys out there: Don’t take a girl to lunch and then break up with her an hour later.

Quick and…painless?
9.I had to break up with my ex over text. I felt horrible about it, but I would text him “Hey” every two or three days and get nothing. The minute I texted, “I really care about you but I’m pretty sure you don’t care about me, so sorry but I have to break up with you,” he texts back — and I am not kidding — “K” in less than two seconds. It was the fastest interaction we had ever had.

Harsh!
10. I was living with a girl for more than a year and she decided to break up with me (after two years) and less than two weeks before my birthday. Then because we worked at the same restaurant, she asked me to cover for her on Valentine’s Day… she said it was important. She asked to borrow my truck. I let her. When she returned it to me, I found a receipt for a hotel room for THAT NIGHT in my center console. Happy Valentine’s Day to me.