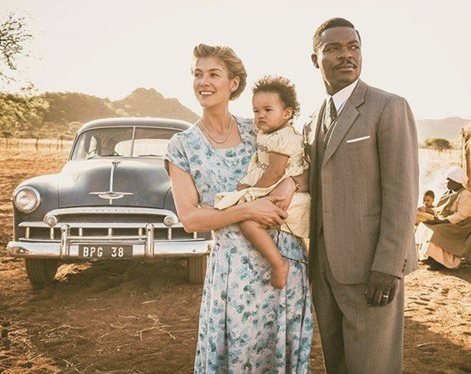 In an industry which has, in recent years, been accused of lacking diversity, the choice to open the 60th London Film Festival a few weeks ago with A United Kingdom is a significant one. Amma Asante has made history as the first black woman director to open the festival, and brings a keen filmic interest in issues of race, equality and love. Telling the largely-unknown true story of Seretse Khama, the heir to the throne in Botswana who fell in love and married a white woman in post-war London, A United Kingdom is a pertinent historical romance with an important story to tell.

Amma Asante’s 2013 film Belle explored the beginning of the end of the slave trade in eighteenth-century Britain and, in A United Kingdom, the British Empire is again under the spotlight.  Set in the post-war years which saw the crumbling of British imperialism, the film opens with Ruth Williams (Rosamund Pike), a straight-talking London girl, meeting Seretse Khama (David Oyelowo) at a dance and falling immediately in love with him. The pair soon marry, a mixed-race marriage which, in 1940s Britain, would have provoked much racism and plenty of raised eyebrows. Matters are made even more complicated by the fact that Seretse is soon to become the King of the Bamangwato people of Bechuanaland – now Botswana – and the union between a black man and a white woman is judged to be an international diplomatic crisis.

A United Kingdom traces the political reactions to the marriage and the hostility with which Ruth was treated both in the UK and in Botswana when she and Seretse returned to the country for Seretse to take up his role. “Black King takes White Queen” scream the headlines as Ruth discovers that it is not only the people of Bechuanaland who are initially hostile to her – whites in the British protectorate also treat her with disdain. Much of this contempt comes from the (fictional) Sir Alistair Canning – played by Jack Davenport – a serpent-like civil servant who is determined to preserve political capital in the south of Africa at the expense of racial and romantic injustice. “Have you no shame?” he demands of Ruth when he learns of her impending marriage leaving her shocked but quietly determined.

Although idealistic at times, a script by Guy Hibbert contains some nice moments of humour – especially between Ruth and her sister (played by Downton Abbey’s Laura Carmichael) – and Rosamund Pike’s performance is exemplary. Her portrayal of a woman caught between two worlds runs in perfect harmony with David Oyelowo, who displays a gentle defiance similar to his portrayal of Martin Luther King in 2014’s Selma. In fleeting moments, especially when in the company of his wife, Seretse’s composure breaks down and Oyelowo pitches this emotion perfectly. Asante’s confident direction, interweaving the machinations of the state with debates around British imperialism, racism and romance, draws out nuanced performances from Pike and Oyelowo which retain, at the heart of them, a strong – perhaps old-fashioned – sense of unyielding love.

When Seretse and Ruth move to Bechuanaland, they leave behind the dreary, rainy streets of London and the dark, grey palate of the film’s opening cinematography is replaced with golden vistas of Africa. The juxtaposition between Britain and Africa, repression and freedom, is clear, but later muddied by the intolerance and inequality faced by Ruth and her husband in both countries. Much of the action flips back and forth between Bechuanaland and the imposing corridors of Whitehall, and the film is largely successful in maintaining a strong narrative and thematic message throughout.

The warm glow of the scenes in Africa does sometimes threaten to airbrush the rather appalling history and, sometimes, events are presented in a cursory manner. Although never appearing on-screen, Winston Churchill, for example, supports Seretse’s claim to return as ruler to Bechuanaland, but a later reversal in opinion when he wins the 1951 election is never explained. Similarly, Ruth’s strained relationship with her family – a potential mine of emotion and drama – is dealt with rapidly. Of course, there is much history to be covered in the film and the centre of the story is, of course, Seretse and Ruth’s romance, and Asante’s focus on issues of race necessarily requires other elements to be sketched, rather than explored deeply.

A United Kingdom is a confident study of a questionable period in British foreign policy where personal relationships and emotions became a weapon in the defence of the ailing British Empire. Amma Asante’s success here is to weave a moving love story into a wider narrative, combining great performances with a true sense of right and wrong. It is a film with an important story which deserves to be much better known.