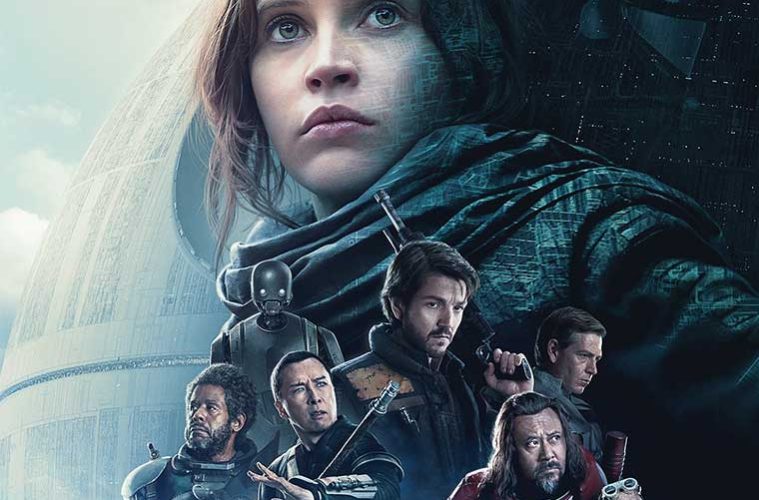 Before I begin this review, I have something to confess: I’m not a Star Wars fan. Not that I hate the cinematic behemoth that is one of the most successful film franchises of all time, it’s just that I can’t really get that excited about it. Unlike many people, I don’t know my Ewoks from my droids, and I’ve little understanding of the politics of Siths, Jedis and Rebel Alliances. This severe lack of knowledge, however, did nothing to reduce my enjoyment of Rogue One: A Star Wars Story – an off-shoot of the Star Wars films which develops and thrives on its own merits.

Way back in 1977, Star Wars: Episode IV – A New Hope was released, and opened with Darth Vader quizzing Princess Leia about the whereabouts of stolen plans for the Death Star. The plot of Rogue One charts how these plans came to be stolen in the first place, presenting many new characters, and revisiting some familiar faces. Beginning with expansive shots of space, populated by a lone spaceship scything through the darkness, Rogue One introduces us to Jyn Erso (Felicity Jones), the daughter of Galen Erso (played by Mads Mikkelsen), an engineer with a central role in the building of the infamous Death Star.

Jyn Erso grows up to become a rebel fighter and joins a Rebel mission led by Cassian Andor (Diego Luna), a young and ambitious soldier in the Alliance. After receiving a holographic message from her father – through his friend Saw Gerrera (a theatrical Forest Whitaker) – Jyn embarks on a quest which leads her across  into the path of many wonderful and strange characters (including more than the occasional Stormtrooper). Events culminate in a plan to infiltrate the Empire’s library where the Death Star blueprints are held, with Jyn favouring a blast pistol over a library card. Felicity Jones is, as usual, on fine form, tackling the action sequences with confidence and her usual elegance. Indeed, much of the film’s success lies on her likeable performance which balances emotion with a sense of muscular determination characteristic of the Star Wars saga.

Introducing so many new characters to the established Star Wars world was always going to be challenging and, although the first third of the film feels like an endless cycle of people being kidnapped, whisked off to random planets and being thrown together with other new characters, the characterisation is largely successful. The ensemble cast which emerges is a rather ragtag group of Rebels, composed of an impressive Force-invoking warrior monk (Donnie Yen) and his machine-gun-wielding friend Baze (Wen Jiang), and Riz Ahmed puts in a great turn as a pilot who defects from the service of the Empire. The film’s light-relief is provided by a reprogrammed – and very sarcastic – Imperial security droid K-2SO (voiced by Alan Tudyk), affording a few laughs in a film which otherwise plays itself quite straight-faced.

The action sequences are as visually-spectacular as they are exciting, and (slight spoiler here) the film’s willingness to not treat its characters as indestructible space heroes is applaudable. Some great cinematography – particularly in the space dogfights where the camera weaves in and out of the action as X-Wing Starfighters take on the might of the Empire – is coupled with modern CGI to reinvigorate familiar Star Wars creations, such as the monumental AT-AT walkers (those four-legged battle robots things for the uninitiated). The final battle is immense in scope but, rather than descending into incomprehensible chaos, remains tightly-plotted and engaging.

Rogue One is directed by Gareth Edwards, who became well-known for his recent re-boot of Godzilla, and he has developed a definite sense of rhythm in action sequences and in sci-fi film plotting. Here, Edwards (together with screenwriters Chris Weitz and Tony Gilroy) nods appropriately to the original Star Wars films whilst retaining a fresh and intriguing spin on the intergalactic universe. Darth Vader makes several scene-stealing appearances, and some CGI wizardry brings back the late Peter Cushing in the role of creepy Death Star commander, whilst a bit of technical magic gives us a youthful Carrie Fisher as Princess Leia. These touches add some weight to the script and anchor Rogue One to the original films which are loved by millions.

Scoring all of the action is Michael Giacchino’s soundtrack which borrows elements from the original score by the inimitable John Williams, but is confident enough to introduce its own operatic and bold musical themes. On an overall level, Rogue One retains a sense of adventure and fun which is matched by the intergalactic spectacle which was established in the original franchise. To fans both new and old, it offers excitement, action and a touch of nostalgia which works wonderfully to create a film which builds upon its heritage, rather than depending upon it.