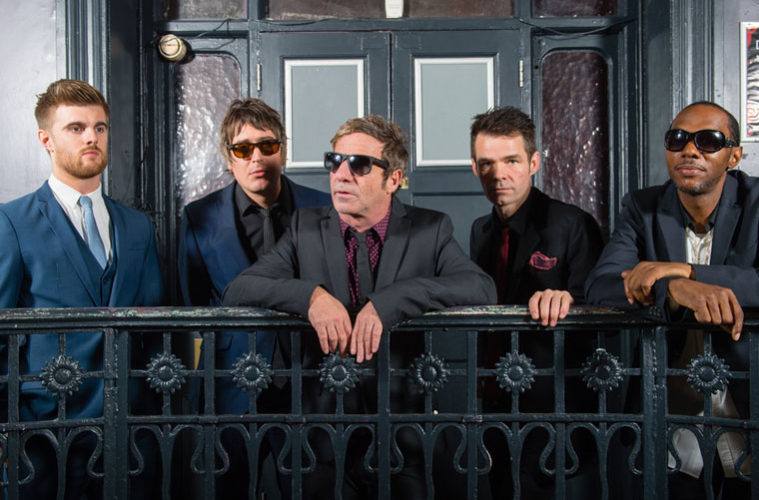 With him and his band the Dub Pistols…We caught up with one of the music industry’s greatest characters…Barry Ashworth!

I’m alright thanks. I’m just trying to get over getting back from Australia last night. Heading off to Barcelona and another 6 dates tomorrow! It’s all a bit hectic but all good.

2.) Thank you for letting me call! I was just going to ask, what are you up to at the moment?

Were getting to the end of the year and we are about a week away from finishing our 7th studio album. We are just in the mist of coming to the end I guess of this year’s touring and we’ve got another 8 shows to go from now till Boxing Day in various places around the world.  So we’ve just got back from Australia, tomorrow Barcelona, then Patras Thursday, Athens Friday, then 3 more shows in places of breach I’m not sure! Then Romania and we finish in Jersey on Boxing Day. I get home about 11 o’clock Christmas Eve, home for Christmas Day and then fly out again on Boxing Day! Then I’m going to take 3 weeks and go sit on a beach in Thailand. I used to go over there and spend 2 months a year just doing work and DJing but nowadays I just want to go and sit on a beach and kick back because next year is looking ridiculous! Next year is obviously our 20th anniversary, it seems to have been getting better and better as everything always goes up and down for all bands but in the last three or four years we’ve become a cult band instead of something new that’s breaking through. It just seems to be getting better for us.

Always the last one you’ve just worked on! Every track you make at that time is your favourite and I think it has to be because if not you’d never feel like you’ve improved. I have ones that I love like ‘Problem Is’ because we were working with Terry and The Specials were so important to me whilst growing up so that is one I absolutely love! And the rest, I mean it’s so hard, I like them all! I think ‘Problem Is’ just because like I said it was the first time we got to work with Terry and she was my hero growing up so it was an important moment for me! If I had to pick one.

4.) So I saw you play this year at Whitenoise, it was so good and I loved it! Do you have a favourite live performance you’ve all done together?

Again were lucky enough to probably do three festivals a week all over the world! Electric Castle in Romania that was pretty special there! We started the year off this year in New Zealand at a festival called The Splore Festival which was on a beach in a nature reserve and that’s a really amazing location and we absolutely destroyed the place!  They said it was the best show they’ve put on ever since they started the festival like fifteen years ago! They’ve invited us back out to do it again in February so we’re flying back out to New Zealand again in February. So they’re pretty special moments. There has been so many you know! You only ever remember the bad ones, there’s been a few!

5.) So did you ever intend to start a band and come as far as you are now?

When I was growing up I honestly didn’t think being a musician or whatever was something that someone from a council estate in South London would do. I went to Ibiza in eighty seven and took pills for the first time. Then become a club promoter and started promoting some of the biggest nights in London for the late 80’s early 90’s. And then started to DJ and the first part of the Dub Pistols was me to be a DJ. It was never meant to be a band! The Chemical Brothers had just come out with their first singles and it was so different to anything else that was going on at the time you know breaks and dance. I just thought that’s what I’m going to do and I just started to make tracks I wanted to DJ with. The first two singles then we did Cyclone and that was a hit on the radio! We were then signed to America and gradually I started doing more and more song writing and bringing in people to form a band but it was never meant to be that way. The thing is people come and go, I’ve been doing it twenty years and when other people come in, it feels like the band just gets fresh again. It’s like reinventing yourself and it just keeps going!

6.) I know you’ve been in Australia! What have you been up to and what was it like?

We flew all the way there and spent thirty hours there! We played at a festival called The Pleasure Garden which was the first one they’ve ever done there. It was amazing and they’ve taken the concepts of Boomtown, Secret Garden and Bestival and tried to reproduce that kind of production level in Australia which has apparently never been done there before! It was really good and in a beautiful location just on the edge of Melbourne by the sea which was pretty special! It was really amazing and we destroyed the after party! Got on a plane and I’m back home now.

7.) What are your relationships like with everyone in the band members? The band is quite big!

Of course they have to be really good! You can’t spend that much time with people and not have a good relationship you know. That doesn’t mean to say you don’t argue, fight and not talk to each other for days. It’s like any kind of relationship. Especially when you’re tired and especially when there’s alcohol. With the schedule we have, of course people are going to get moody, fed up with each other so you have to have a good relationship to be able to survive all those fights. Most bands fall apart just because people can’t bare each other anymore and you have to look beyond that! You’ve got to work through things as it only makes you stronger.

8.) Where did you grow up and what was your childhood like?

I grew up on a council estate in South London! Just outside South London just pass Wimbledon. It was alright, I loved football and I loved hanging around with everybody on the estate, I used to love going out partying. It was just like everywhere else. The world was a different place back then and everyone stayed in their areas. We didn’t go to a different city and party, a different part of town to party, everyone was very territorial. It was only eighty eight, The Summer of Love when ecstasy come along that everybody decided they could get along. Even football players. Next thing you know everything had changed!

9.) So did that influence you and your music or did something else influence it?

At that time before I was into club music, I was into The Clash, The Specials and because of The Specials had a big ska undertone, I started to research more about Jamaican music and studio one and that kind of music. So that led me down that path. The Summer of Love happened and I got into clubbing. I always like to try and use that electronic edge or quite often reggae or some kind of other influence that we put into things!

Well dropping our new album obviously and then just coming back with a whole new load of material! Also playing a load of our stuff we haven’t done because it’s our 20th anniversary! Bringing back some of the older members. Just another year rolling on partying I guess!

11.) How can you see the band developing in 5 years time and where do you see yourself?

I just don’t know any other kind of life. It’s what I do, it’s what I enjoy. Were not a pop band and we don’t make music that radio 1 are going to play, it’s more of a cult thing like I said. As long as I’m still making music and enjoying myself, I will continue to do so. When it stops being fun then it’s time to stop. At this moment in time I couldn’t imagine doing anything differently.

12.) What is more enjoyable playing live or recording tracks?

Playing live definitely. You have moments of inspiration when you’re recording but generally it’s still a process where you’re hearing the same thing over and over again which can be quite painful. Performing live should be fun, people are enjoying it and you get a kick off that!

13.) That’s all of the questions Barry so thank you for your time! I appreciate it a lot!

Yes thanks babe and speak soon!

Check out this track of theirs ‘Pistoleros’ and for more information and tour dates check out their official website: http://dubpistolsmusic.co.uk/