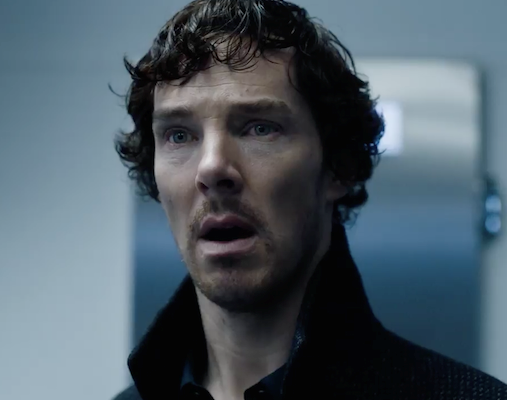 N.B: This review has spoilers within.

This January, Sherlock Holmes and Dr. John Watson were back to fight crime, but on this occasion things were a little different. Martin Freeman’s Watson had a silver comb-over which made him look old, whilst Benedict Cumberbatch’s Sherlock was sporting a stubbly hangover from his time as Doctor Strange. It may then come as little surprise that they stumbled around for most of the first episode discombobulated, to paraphrase another onscreen Holmes, as though bemused to find themselves in Sherlock-land again.

This was rather apt, as this series’ main aim, seemingly from the beginning, was confusion and misdirection. At every turn, when we were all set to have the apparently-resurrected Moriarty (Andrew Scott) slink out and reveal himself as the villain, we were foiled. Writers Steven Moffat and Mark Gatiss rightly chose not to really bring him back but make allusions to him instead.

But unfortunately a mixture of ambition, confusion and darkness ultimately brought the whole series down. Rather than being entertaining, half the time it just ended up as an overcomplicated mess. Even the snappy scripts and Holmes-Watson banter couldn’t make up for the fact that this series was often sheer madness, where familial tragedy rubbed shoulders with Mrs Hudson driving a Ferrari, among other things.

The first episode, ‘The Six Thatchers’, drew comparisons with Bond (Sherlock had a fist-fight in a swimming pool) and had a vague plot based around Mary Watson’s past as an assassin, dwelling overly on convoluted backstory rather than focussing on telling a ripping yarn. Although, as ever, the emotional moments were well-handled, it felt more intense than necessary, despite the fact that the central event of the story is in the books and so had to happen anyway.

The second tale, ‘The Lying Detective’, was a largely self-indulgent adventure that decided to spend its first half running at 100mph because Sherlock was high, and the direction of the episode needed (for some reason) to reflect this (oh look, a dragon!). The rest of the time was spent telling a sordid if contemporary storyline about a serial killer in plain sight who thought he could (literally) get away with murder. To give him credit, Toby Jones was impressive in the role of Culverton Smith, the celebrity murderer in question. But, annoyingly, it all came at the service of something unnecessary, a twist which was thrilling at the time but just plain silly on closer inspection.

The implausible twist was, namely, that Sherlock had a little-known sibling who, it transpired, was a master criminal. Although it was all cleverly done, ending up like an emotional chess game in the last episode, ‘The Final Problem’, it all hinged on a climactic reveal which made no sense. The revelation of Sherlock’s sister (brilliantly played by Sian Brooke) doing terrible and manipulative things purely because she was unloved as a child was not only incongruous but utterly ridiculous.

Still, perhaps this was elementary, as the clues may have been there from the outset. From its very first series, this version of Sherlock has sought to both give a 21st Century sheen to the Holmes story, with onscreen text-speak and wry modern references to the original stories, and push the boundaries of the Holmes myth, via a socially distant Sherlock and a war-traumatised Watson. However, when Watson’s wife Mary (Amanda Abbington) turned out to be a former assassin in the third series, it did push the limits a little too far. However much this tied in with the adrenalin-junkie characters they’d created, everything from that point onwards could have just been simpler had the showrunners made her a grounded, normal everywoman. But normal has never really been this show’s forté.

It does seem as though the writers got to a certain stage and felt as though they had to keep pushing the envelope. This series was decidedly ‘not a game anymore’, according to the trailer. It was dark, edgy and dramatic, which to me is a shame, as Gatiss and Moffat worked better when there were rules they could stick to – solve a crime, understand a bit more about each other, have a laugh, the end. The show was unquestionably better when they did this. The head honchos need to relax and, for once, be unafraid to start telling simpler tales, if they want to once again reach the heights of the superlative second series.

In essence, for me this was definitely the series where Sherlock got too big for the deerstalker. Whether or not he now hangs it up is, ironically, the one thing the show doesn’t have figured out yet. If it does end here, though, it will have gone out well with its very final scene. It’s just a shame that, if this is its parting shot, it has bowed out with a group of stories that aren’t really worthy of the legend.