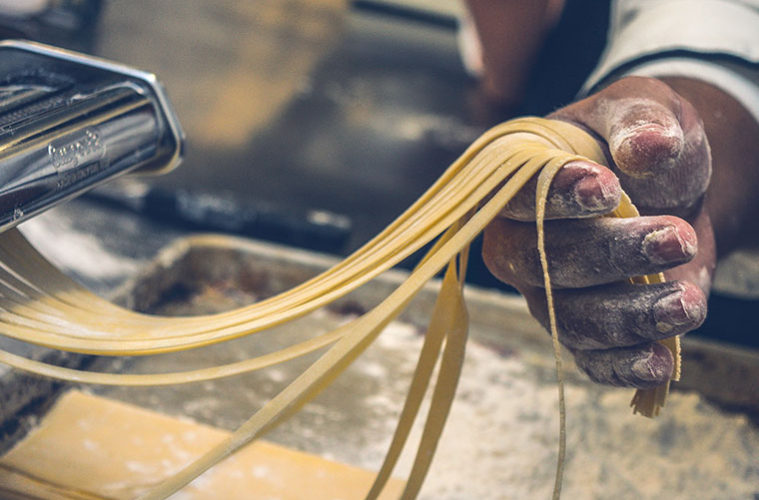 How to Eat Pasta and Not Go Insane

Pasta. It’s not just a student staple. It’s the whole damn stationary shop. If you’re not eating cheap, delicious pasta for at least a few meals a week, you’re doing it wrong! But generic pasta with generic sauce from a jar can get a bit same-old-same-old. Well, SPG are here to spice up your spaghetti and pump up your penne!

Get a spoonful of butter and melt it gently on the hob. Pop in the same amount of flour and then stir it so it turns into a paste. Add milk a little at a time and keep stirring until smooth. Add a handful of mature cheddar and keep stirring till it’s melted. Throw in some mustard and some freshly ground black pepper (or some sachets of pepper you took from the campus restaurant. Whatever) and serve with penne (the tubes).

Cut up some fresh tomatoes, peppers and maybe a courgette. Get a baking tray and stick it in the oven on high. While this is happening, cook around 100gs of pasta bows (farfalle) and cook for 1 minute less than it says on the pack. When done, rinse with cold water and turn the oven off.  When the pasta is cold, mix together in a big bowl with some olive oil. Great for lunchboxes or picnics!

Fry some chopped up bacon and mushrooms in a pan. At the same time boil some spaghetti or some tagliatelle. When it is done, drain it and stick it in the saucepan with the mushrooms and bacon. Add some crème fraîche and lemon juice. Stir. Add some pepper and serve.