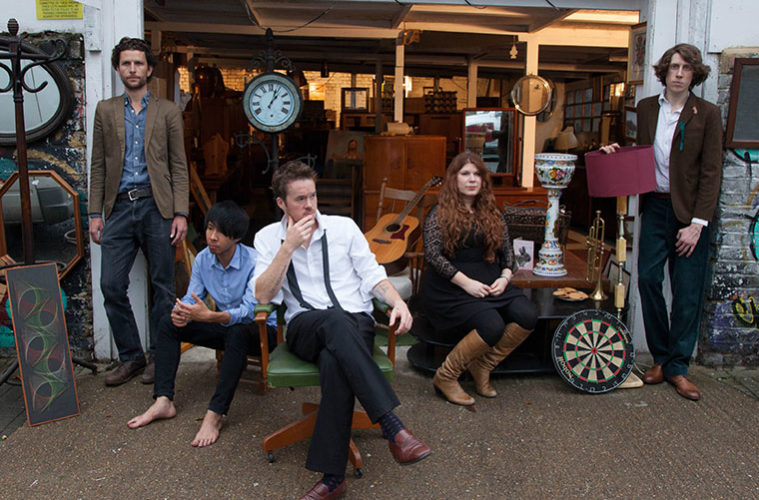 We caught up with London based folk band, Patch & The Giant. We discuss their inspirations and their upcoming debut album!

Q 1: Who/what inspired you to become a musician(s)?

All sorts, we’ve all come from different backgrounds, musically, geographically and the rest. We all grew up listening to and learning from the vastest arrays of different styles, bands, songwriters and composers but there were probably just enough times that we were sat in our respective teenage bedrooms listening to the same Beatles chorus that keep us on the same musical wavelength.

Q 2: Where did you come up with the name for the band? It’s very interesting!

We started with the ampersand and then the rest just came.

Q 3: How would you describe yourself as a band and the music you make?

We try not to describe ourselves at all if we can help it, we’d rather let everybody make up their own minds about what we are or aren’t. But we’ve got a lot of instruments, a lot of voices and we do our best to make them all weave together.

Q 4: What can we expect from your upcoming debut album?

We often remark to one another that all debut albums are by virtue of necessity a ‘best of’ up to that point in time so probably, without sounding too boastful, the songs which we feel are our ‘best’ and most reflective of who we’ve been and become throughout the time. There’s a lot of variety on there and some bold decisions which we wouldn’t have made without our producer, Nick (Trepka).

Q 5: What would you say is your biggest achievement to date being in the music industry?

Having a fan in Mexico pledge to have our logo tattooed.

Having glided past the awkward second album with poise and grace and continuing to explore new musical territories. Headlining a main stage at a big festival….And having proper artist transport, no more traipsing through mud carrying a drum on your head.

Q 7: What advice would you give to aspiring musicians?

Don’t feel you need to shoot your load too soon and don’t compare yourself to others to the point of distraction. So many young bands expect to have it all before they’ve finished puberty and forget to live their lives alongside it all. It’s not normal and it’s generally not healthy to become successful and famous overnight. It’s also not sustainable and it’s so easy to lose sight of what you’re doing and why. So take your time, get out there, get to know your craft, play the shit gigs for a bit and have fun with it, make stories from it. If you’re not having fun with it on at least some level, you need to ask yourself why on earth you’re doing it. Also never throw away an idea. You never know when you might find a home for it.

Check out their latest track ‘The Beggar’s Song’…