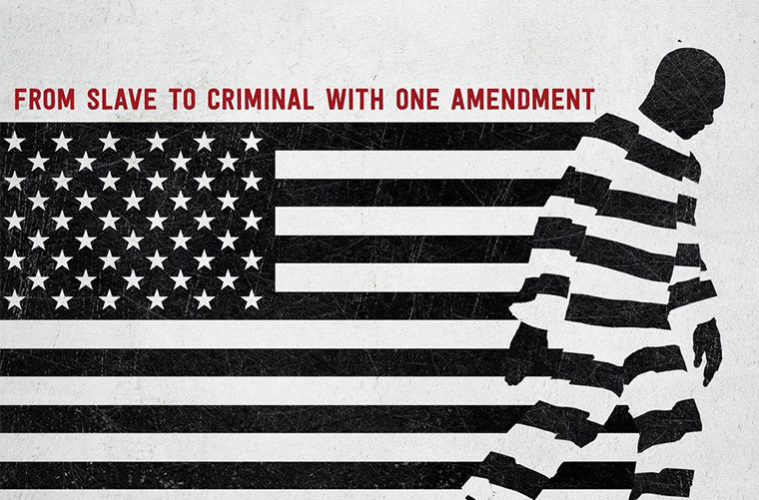 The United States of America has less than 5% of the world’s population, yet 25% of the world’s prison population. 13TH looks at America’s attitudes towards their prison population and with the help of academics, attempts to understand the reasoning behind this. Ava DuVernay, who is known for her debut film Selma (2014), presents information we’ve probably all thought about a little bit, but analyses the information and constructs a very believable argument. She also gives a voice to opposers of the film’s argument, but presented against all the facts its evident that they have no basis for their beliefs.

We begin looking at slavery and what the 13th Amendment actually means. The 13th Amendment declares that “Neither slavery nor involuntary servitude, except as a punishment for crime whereof the party shall have been duly convicted, shall exist within the United States, or any place subject to their jurisdiction”. Simply put, the amendment formally abolished slavery in 1865. Despite this seeming to be an incredibly positive thing DuVernay explores how mass incarceration in America isn’t too different from slavery, the amendments loophole states that prisoners do not have the same rights as everybody else.

The film also examines how Americans have been conditioned to think that black people are criminals, through the media focusing on them more than white criminals. One of the academics in the film states that injustices and forceful police situations have always been occurring, people have always been protesting for black rights, but social media is only just making these stories instantly accessible worldwide. #BlackLivesMatter is discussed as being an extremely good way of bringing people together, no matter the race, people are waking up and finally recognising the injustices.

A number of politicians spoke out about the use of prison and opinions on incarceration became integral to presidential candidates’ campaigns throughout the 1980’s and 90’s. Bill Clinton’s Three Strikes Bill is mentioned and in 2015 he spoke out about his regrets about imposing the bill. Between interviews and discussions, facts about the prison system and number of prisoners are shown on screen and it’s extremely shocking to see the sharp rise in inmates throughout the years. Mass incarceration has become a source of profit for a number of companies and 13TH looks at the links between political interests and money. The company ALEC (American Legislative Exchange Council) is looked at in the film, an organisation which drafts legislation, and its members are a number of high profile companies such as Walmart, telecom and food businesses which profit from mass incarceration.

The film does an incredible job at collating information. It isn’t overly biased yet presents facts about the past 150 years including the civil rights movement and how powerful and influential politicians often abuse their power and are clearly out of touch with the American people. Opposers of mass incarceration of black people are often arrested as according to the 13th Amendment means they have no legitimate power. The statistics are jarring and shocking and the narrative is very well constructed. Black people are treated differently in the judicial system and it needs to change.