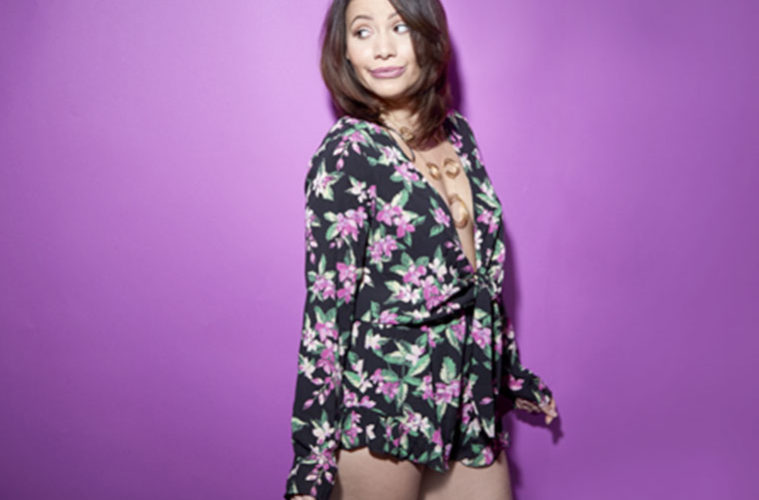 Three things happened when I was eight years old. I figured out that I was different than most of my friends and family, I knew I wanted to marry Joey from New Kids on the Block and I was offered my first stand up gig at Villa Berulia, an Italian restaurant in New York City.

Comedy has always played a role in my life. It started pretty early. I remember my parents letting me stay up past my bedtime to watch Johnny Carson and being enamoured by the comedians he had on as guests. I would memorise their sets. My mom never cracked a smile when the actual comedians told their jokes, but when I recited them back she would have tears in her eyes from laughter. I used to think, “wow, I’m funny”, not realising how serious joke theft is in the comedy community. But I guess you could just add that to the list of adolescent crimes I committed along with sneaking into the movies and stealing a unitard from a Lazarus department store. It still fits. I regret nothing.

But watching late night wasn’t the first time I started to explore comedy. I think it was just the first time I became a fan of stand up. I didn’t realise it at the time, but comedy became my best friend when I was really young…like pigtails, lunch box young. Probably because I never felt like I fit in anywhere. I come from a mixed family. Both of my parents are African-American, Native American, and I suspect there is some Caucasian in there too. I’ve never met a white person in my family but I’m sure it’s safe to assume by my pallid complexion that there’s got to be at least one in there somewhere. My parents are not one hundred percent sure what they’re mixed with either which is ridiculous and also the reason why my sister and I got them a gift card to one of those ancestry websites. It’s probably a good idea to find out what we are before Trump tries to have us deported. Needless to say, I was confused growing up. But who wouldn’t be when their mom is in the kitchen cooking pigs feet with fatback while listening to Michael Bolton.

I had frizzy hair, big lips and I just looked different. That’s the only way I can describe it. Black kids couldn’t tell if I was black and white kids couldn’t tell if I was white. What I could tell was that I felt left out on most occasions, even with my family. So I spent a lot of time by myself, because when I was by myself I didn’t have to feel weird or different. I found comfort in being alone. But when I did have to be social, I found that when I was uncomfortable I could overcome that tension by saying something funny. I learned that when you say something funny it distracts people from focusing on the things with which you believe they’re preoccupied. It’s also an escape from feeling left out. When you have a classroom laughing at something you said, in that moment you feel accepted and liked. How I felt just minutes ago or a week ago no longer mattered. Jokes became a defence mechanism. We all have our protective gear. Some kids chose bullying, others chose being “cool”. I chose punchlines.  Although, I never had to study jokes.  They just kind of came out of me. Which makes me feel like I was born to do this.

What’s funny is that as an adult, I still encounter the same experiences and feelings I had growing up. Although, they do may manifest themselves differently. No, I don’t get my hair pulled by black girls who are darker than me anymore, but I still feel the tug in the form of comments like “Oh, Candice, for a second I thought you were a white girl…” I feel it when I perform in predominately black rooms; like I’m not black enough to connect and I how I have to fight harder for acceptance. But it’s a fight I’ve been fighting all my life, so I’m used to it.  What I hope to accomplish through my stand up and future projects is to help narrow the divides that not only separate different races but the ones that exist within race…the lesser known divides that make people feel inadequate and inferior. It was those wounds that brought me into comedy, and I feel it’s only right to use my comedy to help heal them for others.