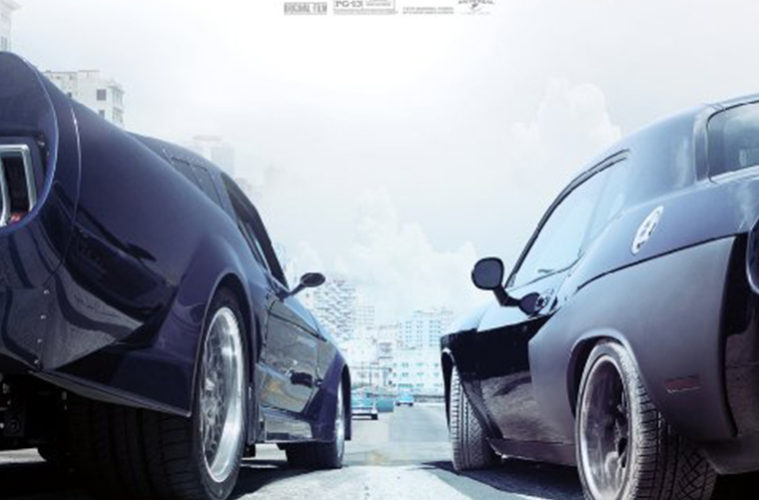 Can you believe it? Fast and Furious 8. EIGHT. Numero huit. Nummer acht. Okay, you get the idea, but the fact that this film franchise has not only made it to its eighth installment, but has set global box office records in the process, is really quite remarkable. But, when you think about it, the astronomical success of F&F (not to be confused with Tesco’s clothing brand) is quite simple to explain: fast cars, wild stunts, guns, banter, and yet more fast cars is as appealing as any leave-your-brain-in-the-foyer blockbuster. High art, this is not. But there’s enough in Fast and Furious 8 to rev your cinematic enjoyment levels into the red. Here’s a film review –

If one were to think of a single word to describe the plot of Fast and Furious 8, it would surely be “preposterous”. Indeed, your average thesaurus would struggle to contain enough synonyms to adequately describe just how ridiculous the story is, although that is rather beside the point. The franchise has never really depended on logical or sensible plotting, and this latest outing is stuck firmly on cruise control. The opening sequences see Dom and Letty (Vin Diesel and Michelle Rodriguez) enjoying their honeymoon in the classic car heaven that is Havana, until mysterious cyber-terrorist Cipher (played by Charlize Theron) coerces Dom to go against family – the one thing you don’t do in a F&F film – and work for her to steal nuclear launch codes.

The rest of the team are, obviously, not best pleased by Dom’s betrayal and what ensues is a whistle-stop tour around the world, smashing up enough cars in the process to put Churchill car insurance out of business. Hobbs (Dwayne Johnson) is rescued from coaching his daughter’s football team (he encourages the 10-year-old girls to psych-out their opponents with the haka) but is less happy to be reunited Jason Statham’s grizzly Deckard, who also joins the team (comprising Tyrese Gibson, Ludacris and Nathalie Emmanuel) to help get Dom back on track.

It must be said that director F. Gary Gray (best known for Straight Outta Compton and Law Abiding Citizen) certainly has fun with the action sequences, creating spectacle for spectacle’s sake, and turning the streets of New York into a giant Scalextric track. Cipher, from her high-tech spy plane, has the ability to hack into driverless cars and cause utter chaos: perhaps not such a wild idea given the apparently hackable nature of much consumer technology these days. Not to be out-done by the stunts in the last film, the world-saving action moves to the icy landscape of Russia, where the team drive their Lamborghinis and Bentleys to the limit in order to escape Russian separatist militia and a nuclear submarine. It sounds absurd, and it is.

A zesty soundtrack – a hallmark of the franchise – accompanies the action and, for the most part, complements the craziness of the fight sequences and car chases. This is especially the case in a jail riot scene in which Johnson and Statham take on prison guards and fellow inmates in order to get to one another for a good old punch-up. Fans of the franchise will appreciate the character interactions, loves, and feuds which are in the screenplay, but such narrative nuances are smothered by the smell of burning rubber and the sound of sub-machine gun fire.

In amongst all this wild and frenetic action, there are moments of humour and, perhaps, Jason Statham’s finest screen moment. A bold claim, I know, but all I’ll say is it involves a gun battle and a baby in a car seat. Charlize Theron does a nice turn as the enigmatic super-hacker, even if her role is often reduced to shouting angrily at her henchmen and typing frantically on a keyboard (the universal Hollywood sign that hacking is taking place). The banter between the boys – Johnson, Statham, Diesel and Kurt Russell as Mr Nobody – is perfectly watchable, although Michelle Rodriguez and Nathalie Emmanuel could have been given a bit more to work with.

Fast and Furious 8 delivers what many will have been hoping for, and is very much a product of its predecessors. There will always be a place in the cinema for films of this type, films which demand no effort on the part of the audience but which can be enjoyed in a simple way with a mouthful of popcorn. The stunts are impressive, the characters likeable and, crucially, the film knows what it should be: unashamed fun.