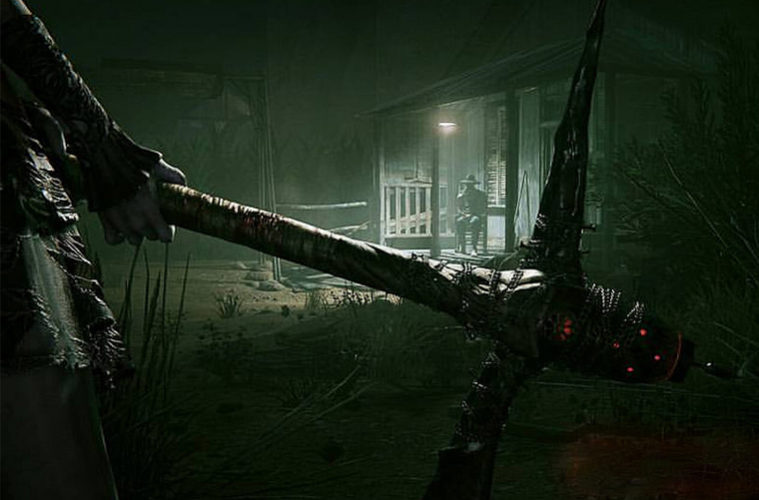 The Outlast series first off, is hands down my favourite horror game, I’m not saying it’s the best one out there as I acknowledge the game is rather flawed but I just personally enjoy this game the most compared to other horrors, also, this game was one of the first to introduce me to horror gameplay.

This review is going to be based on positives and negatives of the game and I’m going to assume you’ve already played/watched it, if not, be prepared for spoilers.

‘Outlast II’ is a first-person survival horror game set in Northern Arizona and concerns investigative journalist and cameraman, Blake Langermann who, alongside his wife, are investigating the mysterious murder of a young pregnant woman. They enter the a deserted area of Supai by helicopter which unexpectedly crash lands. The player controls Blake, and when he awakes from the crash, he finds his wife missing, and their pilot skinned alive and tied to a tree… Blake’s efforts to find his wife take him through a conflict between two cults of mutated and insane individuals who have kidnapped Lynn and claimed she is pregnant with the anti-christ.

Despite acting upon criticisms of the first games it still fell into similar traps that failed the first games such as WAY too many documentations, rather tedious gameplay and just a generally sh*tty ending. Firstly let’s start with the documents. As much as I love story elements in games I know not all gamers do and will mostly rely on the actual gameplay. With ‘Outlast’ it is an ESSENTIAL to read these documents or you’re going to struggle understanding the storyline and even as somebody who LOVES the outlast storyline, even I find the documents a boring after a while as some are too wordy and are generally, in my opinion, a bit of a lazy way of storytelling.

Secondly, the tedious gameplay. Again, the game did improve from its predecessor as it was no longer a case of enter a room, turn 3 valves, ‘oh no monster’ but felt more open world with lots of variations of its gameplay. However, particularly towards the end, the constant hiding and running away began to feel tedious and didn’t give the player enough time to get scared or feel the tension or actually explore and experience the game; it essentially became a bit of a wild goose chase.

Lastly there’s the ending. Red barrels are very good when it comes to constructing the horror genre, however the outlast franchise is yet to have a game with an ending that lives up to the great story provided. After doing research into the story the ending isn’t as bad as I initially thought, however, my point is that I had to actually research to find out more about the story which shows it’s not a great ending. It left many unanswered questions which is possibly why a lot of people were disappointed as we don’t feel quite whole after finishing the game, just more confused and not in a positive way either.

Let’s move on to the positives. Similarly to the first games of the franchise, ‘Outlast II’ has not failed to construct its genre. The game was extremely tense at all moments, involved quality jump scares as well as a generally disturbing storyline with horrific imagery. The concept of not being able to fight back, rely on stealth and having to use a night vision camera all build tension brilliantly which guarantees a fright from players. The storyline was intriguing (once understood), deep and of course disturbing just like the other games. It also included lots of references to the first games throughout which created a sense of nostalgia for fans of the franchise. After watching the demo I was slightly worried about the priest/monster being a bit out of place but he was included very well and the storyline regarding him didn’t disappoint.

The transitions from the reality to the visions were very well done and it was evident that Red Barrels listened to criticisms from the first games and acted on them in attempts to improve the gameplay as it wasn’t as repetitive (in the first part) as the other games. The art style and visuals of the game were beautiful and very fitting for its genre as well as the soundtrack being both unnerving and tense. Unlike in the first game, when the chase music would kick in you would just feel the urge to run because of the chase and nothing more. However, with this game, you could generally feel the music and would feel very tense wondering whether something is chasing the player or not.

Overall I thought the game was very good up until the ending when I think it let itself down and can hopefully be redeemed by a possible DLC.

If you haven’t already played the game, you can check out PewDiePie’s Demo play through (Part 1)

What is your initial response to the gameplay?