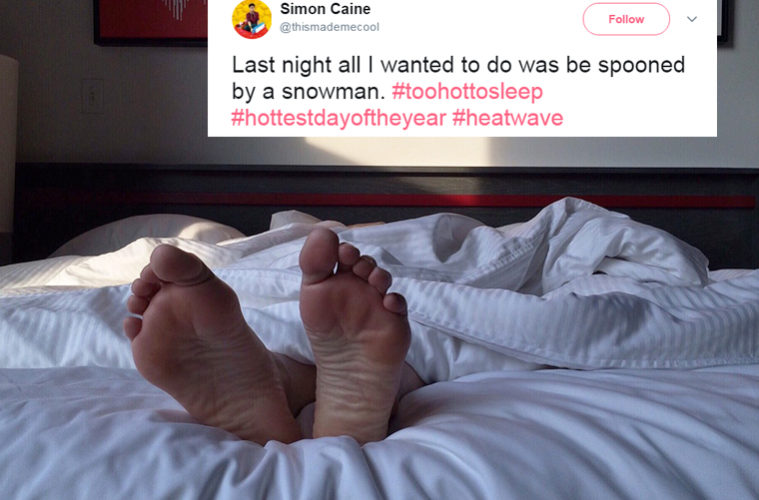 Tweets About Sleeping in Summer

With temperatures in the UK souring to an unbearable 32 degrees yesterday, the current heatwave has led to another sweaty, sleepless night for many. The heatwave has been so intense, temperatures were higher here than in the Bahamas, Los Angeles, and South of Turkey.

Let’s be honest, if you’re British born and bred, you’ll always find something to complain about when it comes to the weather; it’s too hot, too cold, it’s humid, it’s too windy, it’s not windy enough… But what we struggle with most is not getting our beauty sleep as a result of sweaty temperatures. British housing typically doesn’t come with air conditioning, so usually our only solace is that dusty desk fan that’s been sat in the loft throughout the winter months. And really, it only blows the hot air into your face at a higher velocity… It’s deemed useless, really.

The people of Twitter have taken to the internet to express their concern for a lack of sleep due to the summer weather. Here are the greatest tweets about sleeping in summer…

Windows cracked open, fan on full blast, duvet kicked off bed and it's STILL to hot to sleep….what am I meant to do now?! #toohottosleep

Well another fabulous night's sleep over, refreshed and ready to face the day with verve and vigour #not #TooHotToSleep #heatwave pic.twitter.com/PeOypiA007

Me going to the bathroom in the middle of the night last night #TooHotToSleep pic.twitter.com/JoegKSuFot

#TooHotToSleep I will never complain of the cold or rain in the UK again please come back I want to bloody sleep.

Last night all I wanted to do was be spooned by a snowman. #toohottosleep #hottestdayoftheyear #heatwave

Is it acceptable to take a bag of frozen peas to bed as an improvised cold water bottle? #toohottosleep