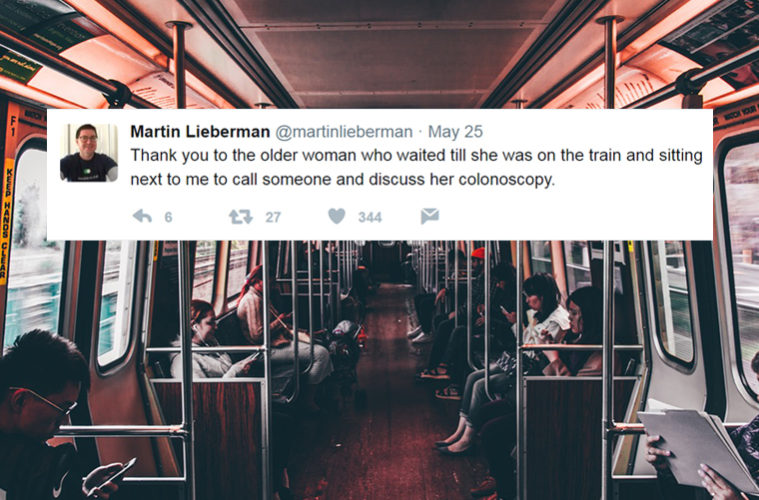 Public transport comes with its difficulties, if you commute via bus or train on a regular basis, the tweets below are probably standard to your everyday life.

A woman on my train thought I was someone else, came running up to me and hugged me. Took everything in me not to pretend to be that lady

Man next to me on train looking up the definition of "buttered bun" and I find myself wondering about the night he just had. @WhoresofYore

Whenever you feel like a garbage person, remember that somewhere someone just got on a packed train with their backpack on

A lady came on the skytrain with an anaconda chilling on her neck. Mother fucking snakes on a mother fucking train.

Thank you to the older woman who waited till she was on the train and sitting next to me to call someone and discuss her colonoscopy.

A guy on the train is following progress on his phone, but in car nav mode. He's getting annoyed when the train doesn't turn down streets.

Nothing upsets a subway car full of New Yorkers quite like a guy with an accordion at 10:30am.

Shoutout to the business woman I saw eating a bowl of ice cream on the train this morning at 8:45 AM. You inspire me.

Waited so long for the train, when I finally got on I saw someone I thought I met years ago but I just recognized them from the platform.

Someone under the age of 60 on my train has their keyboard sounds on. Monster isn't the right word, but it's the first to come to mind.