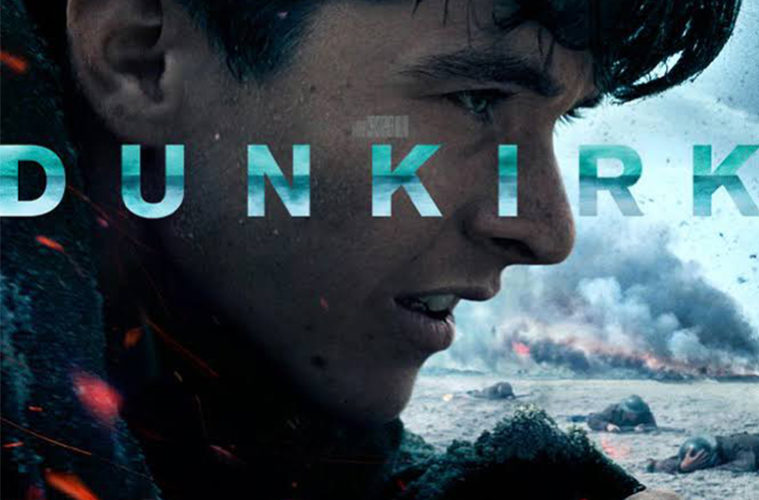 The first thing that hits you about Dunkirk – Christopher Nolan’s latest and, perhaps, greatest film – is just how startling it looks. A result of Nolan’s decision to film with IMAX 70mm and Super Panavision cameras for the highest possible image quality and scale, the aesthetic detail and tone is breath-taking and overwhelming. But this is only one element in a film which, on every level, is a tour de force of cinema, swooping from the expansive beaches of Northern France to the claustrophobic intensity of a Spitfire cockpit in a heartbeat and with an unsettling force which only really hits you when the credits role.

Dunkirk is, of course, based on the real events of 1940 which saw over 338,000 Allied soldiers being rescued from Dunkirk as the Germans encircled them. It was something of a miracle evacuation in which civilian boats, as well as Royal Navy vessels, made the journey across the English Channel to bring soldiers back to Britain to regroup. Nolan has never made an historical movie before, and has managed to create a film which is both immersive and realistic, but retains the directorial hallmarks for which he has become famous.

The most recognisable of these is Nolan’s fascination with how time can affect storytelling, and his scripts have always placed great emphasis on temporal and chronological gymnastics. Dunkirk is no different, recounting the evacuation from those on land, at sea, and in the air, with each story taking place over three time-scales: one week, one day and one hour respectively. Such time weaving may sound confusing but, in actual fact, the effect is rather brilliant, offering a compelling account of one of WWII’s most famous events.

A vivid and very loud sound design couples with the narrative to submerge the audience into the chaos and threat, as bullets strafe vulnerable men on the beaches and slam through the side of boats turning them into little more than tin coffins. Such bold sound effects are enhanced by the relative lack of dialogue in the film, which serves to make the lines which are spoken resonate that little bit more and reinforce the scale of the action which dwarfs any one single man. Hans Zimmer scores the film with his unmistakable style, building tension with a clinical clock tick and an unrelenting crescendo to something which is less a musical score and more an elemental experience.

In the beginning of the film, the camera lurks over the lines of British troops (who are indulging in the national stereotype of queueing) waiting for boats on the sands of Dunkirk, like thin lines of dark paint trembling across a leaden canvas. What is disturbing is just how young these soldiers are, barely out of their teens and thrust into the most unimaginable of situations by world events.

The cinematography from Hoyte Van Hoytema is simultaneously beautiful and terrifying, and captures the beaches of Dunkirk as if they were a landscape from another planet. For the men trapped so close but yet so far from home, they may as well have been. Organising the naval evacuation is Commander Bolton – played by Kenneth Branagh with both stoic determination and emotional apprehension – and who looks out to sea in search of, as Winston Churchill termed it, deliverance.

Amongst the young, traumatised faces of countless soldiers is that of Fionn Whitehead giving a perfectly-pitched performance as the typical British soldier: indeed, this emblematic character is called Tommy. He is thrown together with another soldier (Aneurin Barnard) and Alex (played by Harry Styles who is remarkably good on-screen) in a land and sea quest to make it back to Britain.

The trio’s efforts lead them across the path of pleasure vessel “Moondance”, captained by Mark Rylance who is on top form, giving a subtle and beautifully sensitive performance, as it makes its way from South West England to the shores of war-torn France. Nolan’s long-term collaborator Cillian Murphy (credited only as “Shivering Soldier”) is also rescued by the boat and the voyage of the small cruiser becomes all the more dramatic.

Underscoring all of these stories is the air campaign, featuring Tom Hardy and Jack Lowden as Spitfire pilots, screeching across the sky in search of enemy bombers and mosquito-like Messerschmitt. It is these scenes in the skies which are some of the most awe-inspiring in the whole film, and Nolan throws the camera around with an ingenuity and power akin to Inception.

For a war film, there is remarkably little focus on the personal backstories of the characters. Instead, they have all come to be defined by the need to survive Dunkirk, each man reduced to a single goal. To be sure, there are heroics and the latter half of the film does edge towards patriotic sentimentalism and rhetoric, but even here Nolan has a sting in his tail. The two final shots are arresting and poetic in equal measure.

Dunkirk is a true example of event cinema – a film which deserves to be seen on as big a screen as possible. The actors are universally brilliant, and have an understated approach to their performances which makes them all the more powerful. In Dunkirk, Nolan has created stark images which will linger both in your mind and in cinema history. It really is that good.