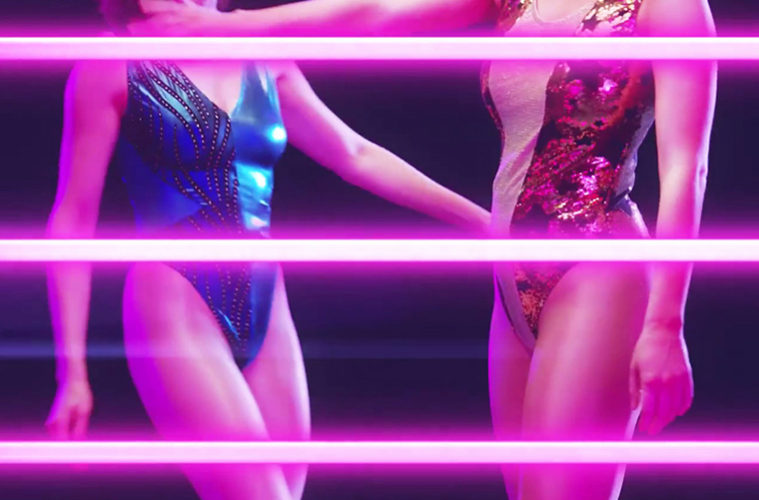 GLOW, or ‘Gorgeous Ladies Of Wrestling’, is the newest show to hit Netflix. I saw this advertised for over a month, with two minute clips and interviews storming my social media pages and all I could think was ‘this show really isn’t for me’. I have never been interested in wrestling in the past and it just seemed a little too over the top for me. When it finally came out I casually put on the first episode…and finished the series the next day. This show was so real I couldn’t stop watching. Whilst it is fictional, the general origin story of women’s wrestling is very real and very successful!

GLOW opens with Ruth Wilder – an aspiring actress who is down on her luck. Then she hears of this new audition. We see the audition process of a group of women learning the basics of wrestling (it’s quite funny to watch at the start) and as the group gets smaller, we finally meet the women that made the cut. One of the best things about this show is the diversity in body types – we don’t just see stick thin women, but we get some curves and larger women who are confident and strong – this is a rarity in TV even now, and it was refreshing to see! Watching the women grow throughout the ten episodes made me feel so supportive that when they successfully performed some of the difficult moves I was fist punching the air and may or may not have had blurry eyes a few times.

Not only does this show present the difficulties women faced, particularly in the world of acting (seen all too clearly in the opening scene), but it also shows director Sam Sylvia’s struggles with his career. Despite his hard work he isn’t taken seriously as a director and he struggles with creativity for his future films. We see his loneliness and destructive nature to push away those closest to him– the only person to become his true friend is Ruth, whose positive attitude seems to bring a little more light in to his life. This is what makes the show so real – it truthfully presents the struggles of men and women without any flowery cover – it’s raw and truthful and speaks to its audience.

GLOW is a comedy-drama that will definitely have you laughing throughout, even during the more serious scenes – the women grow together and you go on their ride with them through all their struggles and their successes, and it’s an amazing journey to go on! Not to mention the COSTUMES! They’re bright, they’re tight and do everything right! They delved into the 80s vibe and all the incredible (and sometimes dreadful) trends that were fashionable and it works so well. If nothing else has sold this show, hopefully that will!