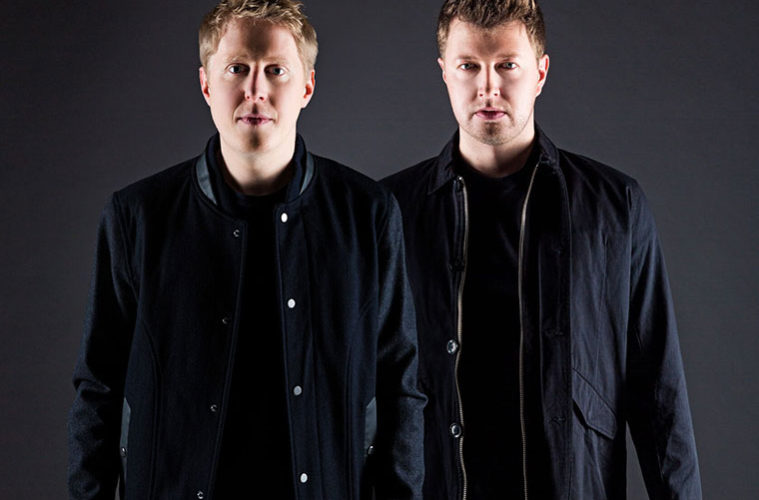 Drum and bass duo DC Breaks have made their way onto the widest range of playlists. Their hardcore club cuts have been rewound by the likes of DJ Friction and Andy C! We managed to catch Dan to find out a little bit more about what happens in the world of DC Breaks…

Q 1: Hey! Thank you for wanting to chat with us. How’s things going in the world of DC Breaks?

Thanks for having us! Yeah, we’re very good thanks  – taken a bit of time out after the album release, bit of a holiday etc but now fully back on the festival circuit and in the studio!

Q 2: Tell us how it works in the studio with the two of you?

Well, we don’t actually work together so much, partly because we live in different cities 200 miles apart. But also because we work better on our own! This gives us both a lot of time to come up with the original ideas. Once we have something we like, we can fire it over to the other to have a go on and add in a load of new elements.

Q 3: How did DC Breaks come about? Tell us the journey from the beginning.

We met at Edinburgh University a few years ago through some mutual friends and just got talking. DnB was strong up there so we’d often be watching the DJs together and waiting for the dubplates to drop, trying to work out who the producers were! We both had little production set ups and were impressed by each others productions, so it wasn’t long before we began to collaborate and DJ together. Our first releases came on local label ‘Restless Natives’ under different monikers, but we soon formed the DC Breaks name and went from there. Eventually our tracks found their way to Andy C and RAM Records and the rest is history!

Q 4: What were you into before you became a duo artist?

Dan played in a couple of bands and was always into guitars but Chris was mainly into rave music! This actually reflects a bit in our production – Dan often brings the more musical elements to the music, whilst Chris works more of the gnarly bass sounds. Aside from that, we both went to clubs a lot. We actually worked out that we’d been at the same nights in London but didn’t know each other at the time! Mainly The End and Bagleys (oh those were the days!)

Q 5: Your latest album ‘Different Breed’ was released back in April. How long did it take to put that together? The artwork is so cool!

Thank you! I’ll let our graphic designer know! We were super chuffed with how it looks, especially the vinyls.

So it took a very long time to make. It’s kinda three albums in one, so there ended up being a lot of variation. It seemed that each time we were finishing one of the albums there would be a change in circumstances and a big delay, during which time we’d make a lot more music and replace some of the tracks. But we’re very happy with how it turned out, even if it was a bit late haha!

Q 6: Favourite track on the album?

Time To Kill – which is actually the oldest track on there!

Essentially when we were at Edinburgh, DJ Kid was releasing some of our tracks and he sent a few of our unreleased tracks to Andy C who then signed us up to Frequency Recordings initially. After a few releases on there he came back and asked us to join RAM so we must have done something right!

Q 8: Has being signed to the label made any major changes in your music career? I bet it’s great being a part of such a wicked drum and bass family!

Yes definitely! I guess we initially found it exciting and daunting in equal measure. The roster on RAM was and is ridiculous, so I think it really pushed us to up our game, otherwise we might not have had any releases! It’s also opened up a wider audience and new opportunities. Through RAM we’ve done some amazing DJ shows around the world but we’ve also been commissioned to write music for video games and had our music on major sporting events on TV as well.

Q 9: Which new drum and bass artists do you rate at the moment?

There’s a lot of really good DnB around at the moment and a lot of great new talented artists coming up through the ranks all over the place. We’ve recently asked a few new guys to do remixes from the album so we have a couple of guys out of Perth, Australia called Flowidus on a remix, and some Russian guys called Synergy as well. Both are very talented and will go far I’m sure.

Q 10: I can’t wait to see what you guys have in store next! Any exciting projects come up that we should know about?

Well it’s 25 years of RAM Records this year so there’s a few projects in the pipeline for that which we can’t really fully announce just yet, although they have just announced a bunch of massive RAM shows which we’re part of in London and Manchester. We’ve got some killer remixes coming in from the album from both huge established names in DnB and some new guys as mentioned above. We’re also well under way working on album 2 and a bunch of collabs with some other great DnB producers, so it’s busy busy busy. Oh, and Chris is about to become a Dad for the first time which is pretty exciting!