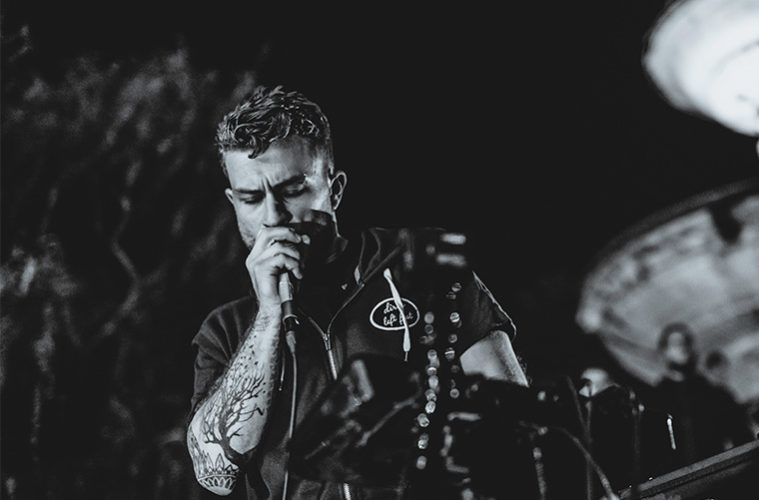 Exploding off the global street, Dub FX has busked his way across the rest of the world, performing his unique brand of loop artistry creating reggae, hip hop, and drum and bass rhythms. We had the chance to catch him during his tour and after the release of his wicked new single ‘Listening’!

Q 1: Hiya Ben! Thanks so much for wanting to chat with us. You’ve just released your new single ‘Listening’, wicked tune! How’s your tour going?

Super well so far. This is my 11th year touring, so we have it pretty dialled now.

Q 2: I can’t wait to see you at Boomtown in August! What do you enjoy most about travelling around for shows?

The travelling isn’t that glamorous because it’s a lot of airplanes and airport. The shows is where it’s at. Being on stage and performing at sick events like Boomtown is the whole reason we do this. I wish we had more time to suss out the countries and cities we go to, but unfortunately it’s go go go. When I lived in a van for 6 years, I got to see more stuff, but then I had to do all the driving, as well as performing, so it was super tiring. 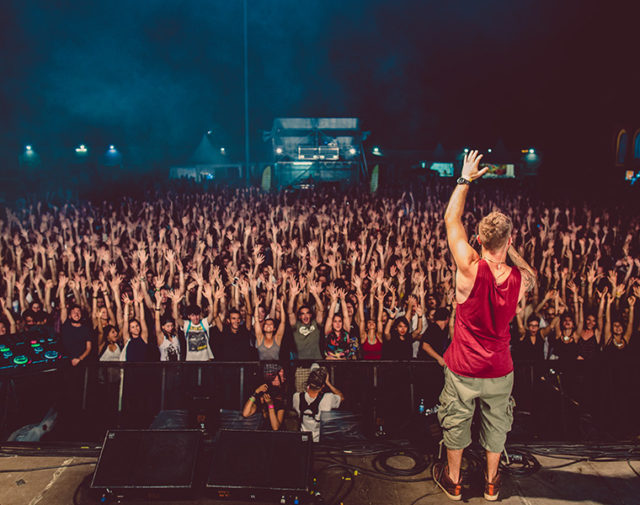 Q 3: Is it difficult to find the time to produce something new whilst on tour? I’m sure your financè gives you huge support!

Actually I do most of my writing on tour. I have a Korg Electribe and I produce most of my ideas on that whilst on airplanes or tour busses. I also write a lot of my lyrics that way too.

Q 4: When was your first proper breakthrough into the music industry? Tell us about your journey from the beginning.

Street performing. Before that, I was playing in different bands in pubs and clubs around Melbourne, but I never quite found my sound. Having to compromise my ideas with other band mates also slowed down my creative process. As soon as I started street performing, I discovered who I was and what my potential as an artist was. Now that I’m fully self-aware of my limits, collaborating with other people is super easy.

Q 5: Can you tell us a bit more about when you used to street perform around the world?

I lived in a 1979 Mercedes 613d van – it was about 23 feet long! Inside I had a shower, a hot water system, a kitchen, 3 different beds, a huge boot for all my busking equipment, 400 litre water tank, a solar panel on the roof charging my leisure batteries that I used for busking and an awning on the side which was super heavy duty! It was awesome! I could roll into festivals and set up my house in 25 minutes, or sleep in the middle of a city and be ready to go out busking in the morning. I literally went out street performing 3-4 days a week in summer and sold between 40 and 100 CDs a day. I calculated once that in those first 6 years, I sold about 200,000 records. Personally, I think that’s the reason my YouTube videos went viral because people were already searching for me and sharing because they had seen me on the streets. 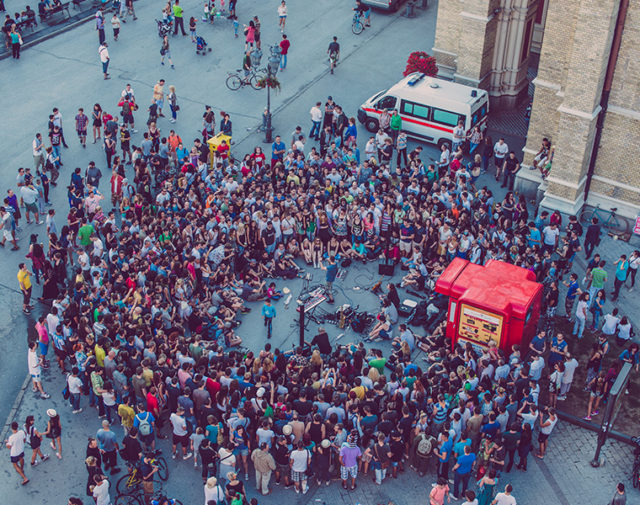 Q 6: You met your financè not long after your first few busking sessions! How does it feel sharing such special musical moments with her?

Actually we broke up! We were together for about 7 years. We grew apart because we met in our early 20s and as anyone in their 30s know, you are still a kid at that age – you don’t know who you are or what you want in relationships yet. The last few years we were together were rough as we had disappointed each other with our actions, to the point where we had irreconcilable differences and had to go our separate ways. After breaking up with her, I met the most incredible girl I’ve ever met in my life! Her name is Sahida Apsara. She’s an incredible poet and song writer amongst many other things. We started making music together and now we have a 6 month old baby – life couldn’t be any better!

Q 7: You started off playing the guitar and singing in bands! Who inspired you start beat boxing and making dub music?

From the age of 17, I was beatboxing with my buddies at school. I was in a metal band, a hip-hop band, a jazz band I was MCing with DJs. I was also doing acoustic sets in pubs. So my taste was always very varied and I was immersing myself in as many different environments as possible. Dub FX is the direct result of all those styles. The best thing is that I get booked for all kinds of jazz, rock, reggae, hip-hop and electronic festivals world wide. I’m not sure why I was driven to do so many different things at once, at school you were either a metal head, or hip-hop head or a techno head – I was never like that. I was listening to all sorts of stuff as well as Cuban jazz and reggae. I loved all styles, probably because my dad has really good taste in music. 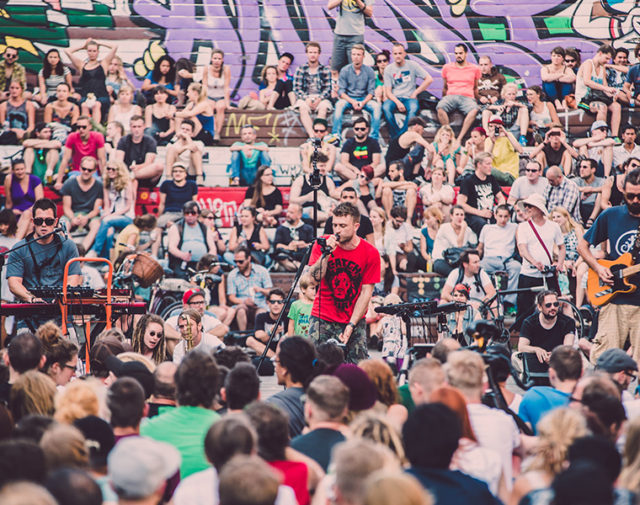 Q 8: When were you first introduced into jungle music?

I was first introduced to jungle when I first got to Manchester in 2006, I was 23! I had only just heard of drum and bass and I didn’t even know what garage was. The scene for UK music in Australia back then was very limited. The drum and bass nights were always very aggressive and testosterone-filled parties, so I didn’t like it because I wanted to dance with my ladies. I still don’t really care how many snares you can fit into a 1 bar loop, or how angry you can make a synth sound. For me its always been about soul. Don’t get me wrong, I love a bit of filth, but it has to be tasteful. If there is no soul, then I get very bored.

Q 9: What do you love the most about playing in Europe?

The crowds really get bass music in Europe. I think as a general rule, most people in Europe like or at least respect reggae music. Historically speaking, reggae is the foundation of dance music, soundsystems, raves, bass drops, MCing and DJing.

I know that techno has a different history, but without the soundsystem and rave culture, there would be no point for techno.

In Australia, people are mainly into techno and psytrance. As much as I respect all genres, these are among my least favourites because I need a lot of drugs to appreciate them. So I way prefer the crowds in Europe because they understand dance music the same way I do. 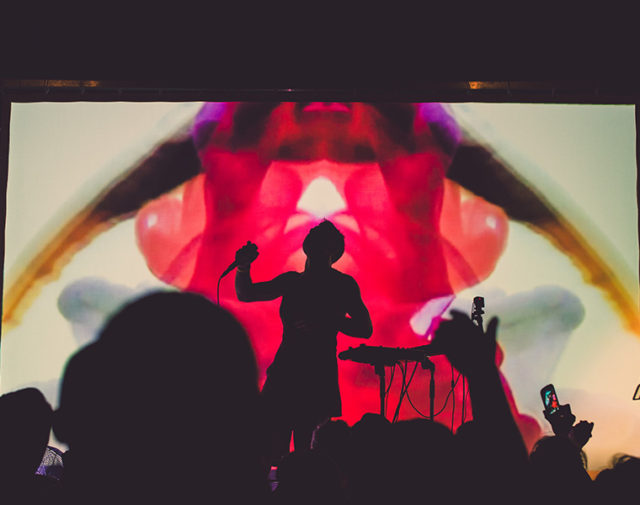 Q 10: Free styling is what you’re known for! What’s your process for coming up with a completely fresh album? Do you like using studio equipment or your own?

I wouldn’t say that free styling is my main thing. I used to be really good at it but I’m out of practice these days. Fundamentally I’m a songwriter, producer and a performer – I do all three on stage. I have written a lot of songs and now I mainly just perform them live. In the studio is where I love messing around with ideas that I’ve written down on tour. I wouldn’t say that my studio production is as good as my live production, but I’m slowly getting there.

Q 11: Describe the sound of Dub FX in one sentence.

Q 12: You love collaborating with different artists. If you could collaborate with one dream person, who would it have to be and why?

Either Bob Marley or Frank Sinatra.

Q 13: What shall we expect from Dub FX next? I can’t wait for some more new music!

I’ve just collaborated on a project with my beautiful wifey, Sahida Apsara. We are releasing new music every few weeks on all digital platforms! Check out our first two releases ‘Listening’ by Dub FX and ‘Radiant Star’ by Sahida Apsara.