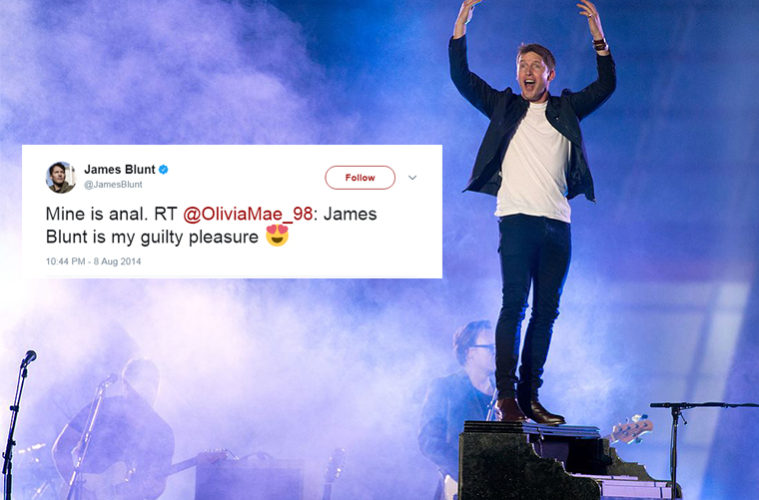 British musician, James Blunt, doesn’t hold back when it comes to dishing out insults and comebacks on Twitter. Here are a few of our favourites… Slag James Blunt off at your own risk.

I’m on a US tour now. Tickets available online. RT @KOGAXWOLF: I wanna go see James Blunt so I can call him a faggot and throw a soda at him

Worse for me as there's nothing else in here. RT @something_robot: Waking up with James Blunt stuck in your head. Nowt worse.

Mainly coz it’s by Daniel Powter. RT @lenacoleman: Pretty sure playing James Blunt's "Bad Day" on loop is not an option.

Show me your tits, Thomas. RT @ThomasDavias: Hey @JamesBlunt what do I have to do to get a follow?

You sound hopeful. RT @TorrieVogt: @JamesBlunt word on the street is you're gay

The Scots have taste. RT @heatherhjordisX: Why is james blunt not touring in scotland??????

Then your dog should try harder. RT @RachelJohnsto96: @JamesBlunt my dog could do better!!!!!

You would if yours was this big. RT @HannahNorman96: I've never fully understood why James Blunt felt the need to strip in his music video

Why limit yourself to 1? RT @wildheartnicks: @JBlunt just listened to your album&if I had to describe it in 1 word it would have to be shite

I know where you live. RT @Jels_x: James blunt looks like a serial murderer