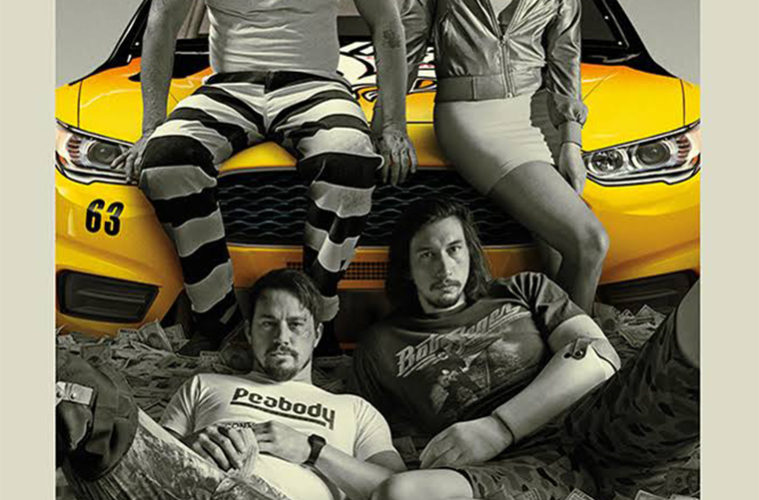 Logan Lucky is a comedy thriller starring Channing Tatum and Adam Driver as the titular Logan brothers planning a daring heist on the NASCAR Speedway. Directed by Steven Soderbergh it follows a well trodden formula of the Ocean’s films but delivers it with strong comedic characters and an excellent comedic timing throughout to deliver a refreshing heist thriller.

Soderbergh finds a lot of comedy through pauses, timing is vital and he holds shots for a long time in order to eek comedy out of the characters’ actions in the gaps between the excitement, a rest-bite through comedy. One particularly funny moment occurs in a prison riot when the prisoners demands include the newest (and unreleased) George RR Martin book. The film is also very well planned and intelligent, as you witness the plan unfold you believe it as plausible and you are intrigued by the ways in which it will innovate next.

The area in which the film innovates the most is through the through how funny the characters are. Soderbergh’s casting of Daniel Craig as a bleach blonde southern prisoner called Johnny Bang may seem ridiculous but it works out rather well and Craig is the funniest that I have ever seen him (another refreshing thing when compared to his deadpan serial killing Bond). Seth Macfarlane is another unconventional cast member as a NASCAR coach with an abysmal English accent that sounds like a silly character in Family Guy, but the annoyingness of this accent seems to serve the purpose of cementing this character as an annoying and arrogant idiot (Seth does it well, no idea why). Adam Driver continues to be one of my favourite actors as the dim witted one armed brother Clyde Logan, his delivery of every line is hilarious, while his brother Channing Tatum is a good primary protagonist characterised by his relationship with his funny little daughter. Hillary Swank’s performance as an FBI agent is one that I found peculiar as she is introduced far too late in the film to feel like an important character and the scenes which she leads are some of the least entertaining and slow the pace of the film somewhat.

One of my few criticisms of Logan Lucky is the lack of motivations to perform the crime, Channing Tatum just decides to do it after he loses his job, after last summer’s exceptionally well motivated Hell or High Water the motivations feel a bit lacklustre for the Logan brothers. This lack of motivation is something which the film draws attention to through Johnny Bang’s brothers who demand a moral reason to be a part of the crime, and accept a flimsy one. Something which I feel the audience does as well as despite little true motivation I was firmly on the side of these people in their heist, purely because I liked them.

Logan Lucky is a very enjoyable, funny and entertaining blockbuster which topped off a summer of average blockbusters in a good way.