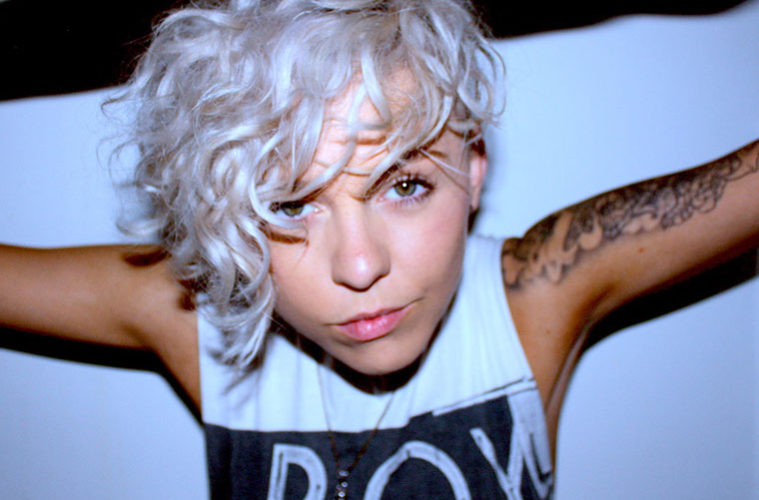 Multi-instrumentalist Lots Holloway is a talented artist who produces, writes and creates all her own music. Since being signed to indie label Why I? Records in 2016, Lots has gone on to release a stream of infectious and original indie-pop tunes.

Q 1: Hiya, thank you for your time. Your recent single ‘Stay A Little Longer’ is amazing! How’s the track been doing since the release?

You’re more than welcome. Thank’s for your kind words! The track has been really well received, it’s quite a bit darker and edgier than my previous two releases so I was curious to see what an audience would make of it. But it’s been a big thumbs up so far.

Q 2: When you were younger, you self-taught yourself to play multiple instruments and you were inspired by some of the songs in your parents’ record collection. What were those particular albums or songs that made you want to learn and play music?

There was lots of music floating around for me as a kid. I remember hearing Stairway To Heaven and thinking “I have to learn how to play this”. I liked a bunch of the more theatrical rock music, Queen, Bowie, ABBA, lots of Pink Floyd stuff. It was all so engaging in a story telling way, and I just wanted to be a part of it.

Q 3: Did you start writing through that period?

Yes pretty much, I’d learnt to play the drums before anything. After hearing a drummer play at a We Will Rock You tribute, I wanted to be just like him. Then after I’d taught myself guitar and piano I found myself composing original music and marrying that with a bunch of poems and short stories I’d written.

Q 4: You grew up in a small town in Cornwall but then moved to London in 2011. What was the change like?

Incredibly tough, but unbelievably rewarding. Cornwall is made up of a bunch of small towns quite far from each other. London felt like the entire population of the universe jammed into one humongous city. Once I’d acclimatised however, it was amazing. Now I can’t imagine living anywhere else (unless I find sunny version of London).

Q 5: You delved into production when you moved to London – how come?

I seem to write and compose songs in my head before getting them out into any kind of audible music.

I can create an acoustic version for people to get a feel for the song itself, but I often found trying to explain the instrumentation and arrangements difficult. Mostly because a lot of the sounds I can hear aren’t always instruments, and I felt it would be easier to teach myself a craft, than to explain to producers/engineers what it is I’m trying to create. It was almost like a language barrier. I like to create, I like to create everything.

Q 6: Not only do you release some beautiful music, but your music videos are amazing. Especially the video for ‘World’s On Fire’! What was the filming experience like?

How very kind. The filming of World’s On Fire was damn cold! I worked with a friend of a friend after being introduced, Kat Kemsley. We got on so well and her ideas gelled with my so easily, it was like our brains were attached. She’s very talented. It was shot in a huge old farm house at the beginning of January 2017, on a snow day. I was wearing just my little t-shirt, trying to pretend it was middle of summer.

Why I? Records came about after working with my manager, Charlie Dilks. He was always so into my music and my creative outbursts that we decided to keep as much control of everything creative as possible and the concept of Why I? Records is built around the artist being allowed almost complete creative control. This was just a perfect fit for me.

Q 8: You’re currently working on your debut EP set to be released this year! What else can we expect from Lots Holloway?

Expect big sounds, lots of noise, tons of energy and a few new lyrics to learn!