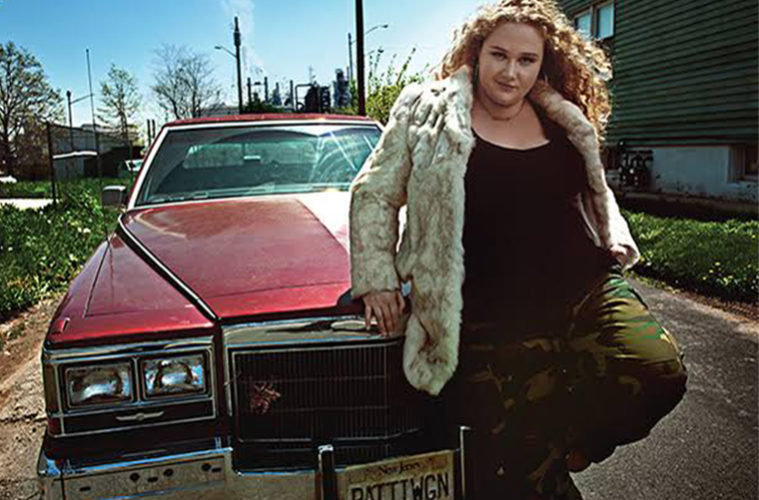 Back in January, a bidding war broke out at the Sundance Film Festival for the distribution rights to a small film with a relatively unknown cast and an unusual story. Fox Searchlight eventually won, and paid $9.5 million for the privilege to distribute Patti Cake$, a story of an overweight white girl from New Jersey whose dream it is to make it as a rapper. It proved to be something of a crowd-pleaser and whilst there is an uplifitng feel to it, the film ultimately relies too heavily on formula to become a real classic.

Directed by Geremy Jasper (who cut his teeth making music videos), Patti Cake$ is strangely engaging in terms of its full-on style, unafraid as it is to perform (explicit) verbal gymnastics as its characters rap-battle their way to respect and money. And money is a big problem for Patricia “Dumbo” Dombrowski (played by Australian Danielle Macdonald), who lives with her dysfunctional mother (Bridget Everett) and ill grandmother (Cathy Moriarty, perhaps best known as Vickie La Motta in Raging Bull). Fending off calls from health providers threatening legal action for unpaid healthcare bills, Patti is sent out by her mother to work hospitality jobs in order to finance her grandmother’s care. Of course, she’d rather be in the studio recording some sick beats with her friend Jheri (Siddharth Dhananjay) and trying to hit the big time as a rapper.

Patti’s story is told with a visual flair which matches the frenetic rhythm of her music. In an early scene, she puts on headphones and literally flies into the air whilst listening to her musical idol O-Z (and a later scene proves that you should never meet your idols). Indeed, there’s something Shakespearian about the rapping, and Danielle Macdonald is to be commended for her performance – restrained and explosive in equal measure. The problem is that the film’s themes, especially set within the disordered context of her home-life, are never allowed to take centre stage. Instead, the underdog narrative spills over into formulaic cliché and lessens any really interesting social commentary on growing up with little money or prospects in North East America.

Despite the great performance from Macdonald and the likeability of her character, Patti’s choices seem a little outmoded, as if written into the screenplay to further push the film towards crowd-pleasing territory, rather than for any sense of realism. For instance, Patti produces a mix tape on CD (I mean, when was the last time you burnt a CD?!) with her newly formed group which features her wheelchair-bound grandmother on vocals. A touch of comedy, perhaps, but it jars slightly.

That said, you can’t fault the enthusiasm or energy with which the film approaches its musical sequences, whether an impromptu rap battle in a car park or an organised talent competition complete with pulsing lights and roaring crowds. It is in these moments that Patti Cake$ is perhaps at its strongest, and you can’t help but feel a little uplifted by the whole white female rap star thing, especially as Patti attempts to lose the cruel nickname she was given in high school in favour of her stage name “Killa P”. Some have drawn analogies with the 2009 Gabourey Sidibe film Precious (indeed, it even features in a rapper’s lyrics directed at the overweight Patti), but the two are polls apart. Whereas Precious is a hard-hitting and sometimes brutal drama, Patti Cake$ is a much lighter affair and not a very useful comparison.

Patti’s narrative trajectory is a fairly obvious one but – and I will always maintain this – just because you know where a plot is headed, doesn’t necessarily mean that your enjoyment will be lessened. This is true in the case of Patti Cake$, and seeing Patti chasing a dream is as rewarding as finding out that Waitrose have just half-priced everything in the bakery section. The core of the story, however, needs to remain believable and, as Patti barges her way into a self-styled anarchist’s woodland recording studio with her grandmother asleep in her wheelchair outside, it just doesn’t ring true. As anarchists go, however, Mamoudou Athie’s is really rather mainstream, and on revealing to Patti that he is the anti-Christ, an unfazed Patti responds with the great line “cool, I think I’m Episcopalian”.

There’s an emotional core to Patti Cake$ which overrides some of the less believable elements of the plot, and the narrative of Patti escaping her dead-end jobs and wanting to make something of herself does make the heart warm. The music fizzes with energy and Danielle Macdonald, in particular, is a great screen presence. In the end though, we’ve seen much of it before and, much like the lyrical hooks in Patti’s raps, the immediate effect soon wears off as you leave the cinema.