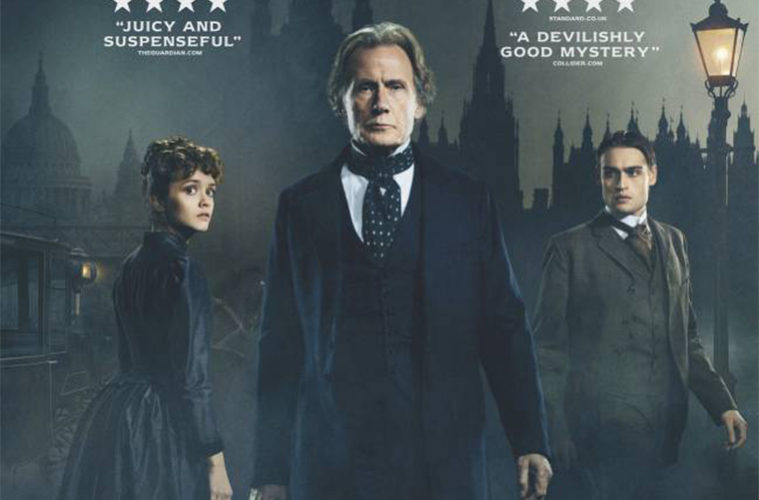 Directed by Juan Carlos Medina, The Limehouse Golem is an adaptation of a murder mystery novel written by Peter Ackroyd. Set in 1880s London it is a dark and horrific thriller haunted by a serial killer who is brutally murdering London-folk with little reason. But who is the titular killer? Comedic Actor Dan Leno? Novelist George Gissing? Writer John Cree? Communist Karl Marx? Bill Nighy’s John Kildare investigates. Kildare is also heavily involved in the trial of Elizabeth Cree for the poisoning of her husband.

The first thing to praise in The Limehouse Golem is the writing. The mystery is genuinely intriguing and kept me guessing from start to finish. I was engaged in the story despite some sketchy dialogue. In direction, it felt like the potential of this adaptation could have easily been squandered but Medina evokes a stylised depiction of London in the late 19th Century. The film is well paced, never lagging and seamlessly weaving flashbacks together with the present, the flash-forward at the start is a satisfying piece of forshadowing. Medina’s use of flashback in sequences in which Nighy reads the killer’s diary is innovative in that it presents each suspect enacting a murder, which confuses the audience by presenting a number of different ‘truths’. The sound design in these scenes is also notable in that the voices of all suspects are layered over each other similar to the beginning of The Usual Suspects, adding to the mystery and creating a demonic voice. The brutal murders are so very brutal and certainly not for the squeamish, but the direction of this gore serves to express the importance of performance to the killer. A strong theme that runs throughout is the public and private faces that people put on.  Nobody in the world of the film is the same in public as they are in private and the creepy presentation of the  music hall in which Dan Leno and Elizabeth Cree perform is central to the mystery as a place in which people hide their true selves.

My chief complaint with the film is the central performance of Bill Nighy. In pre-production Alan Rickman was attached to play the role of John Kildare but the character was recast when Rickman fell ill. As I watched I couldn’t help but see Alan Rickman delivering a much stronger performance than Nighy, who is the same as he always is in every film and therefore the weakest part in my opinion. Nighy’s character’s rumoured homosexuality was not made relevant enough to the tale and felt like a tacked-on attempt to create a more layered character. Olivia Cooke is very good as Elizabeth Cree for whom you feel a deep sympathy as she is  mistreated in court. Douglas Booth, Sam Reid and Eddie Marsan deliver good performances in support of Cooke and each character explores the concept of the white knight as they seek to protect Lizzie Cree.

The Limehouse Golem is a great watch for anyone interested in a thrilling murder mystery.