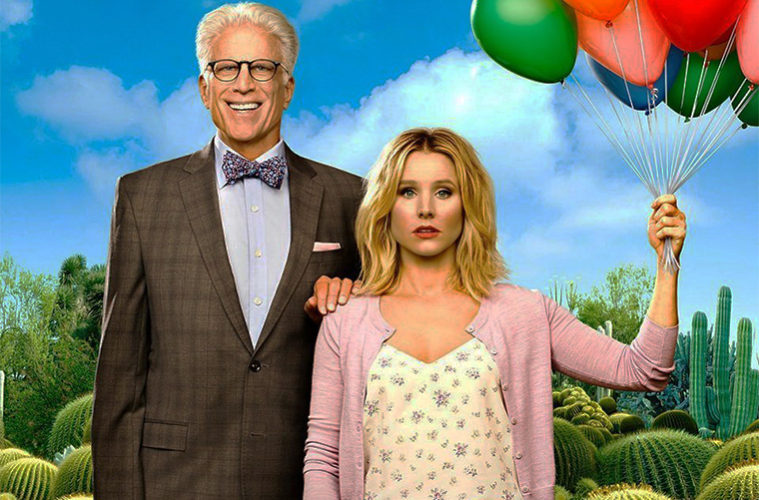 A Review: The Good Place

The Good Place has ironically been introduced to me at a bad time as I’m in the midst of exam season and suddenly I have the perfect reason to procrastinate. But that said, the 20 minute episodes of this Netflix original show have actually been proving useful in time management. A short episode with lunch is the perfect way to step back from everything for a while, especially with the clever twists and on point humour which reveberate throughout this entire production.

This a show which focuses in on several characters, the key players being Eleanor, Chidi, Tahani and Jason. Something they all hold in common? They’re actually all dead and existing in an afterlife they come to know as The Good Place. Everything about this place seems perfect, from the thousands of ice-cream flavours to how friendly all of the people are, but there’s just one flaw… Eleanor’s identity has been mistaken and she isn’t actually meant to be there! As things start to go wrong in what was thought to be a perfect world, the four characters must team up to figure out what is going on and to prevent Eleanor from being caught and sent to The Bad Place.

I think one of the reasons this show is so engaging is because it takes big philosophical questions (such as what happens to us when we die?) and answers them with a mixture of comedy and melancholy. The quirky twists which are thrown in throughout, such as a bad person still being capable of achieving kinder things than the ‘good people’, essentially allows for eye opening exploration which is equally as amusing. It’s possible to really put thought into these questions without becoming too overwhelmed, often leading to rather profound results. In addition to this, the director’s attention to detail is also incredible – through flash backs, if you focus in, you can see that somehow all of these characters have already overlapped and met one somehow when alive.

In terms of what genre this is, comedy is as I have previously stated largely at the forefront. But there is also satire, elements of sci-fi, maybe even dystopia, present. If Thomas More were still around (the origin of all things utopia) I think he would have more than a fair share to say when commenting on how this particular utopia has been built. Heaven is not something that is clearly defined and is shaped in each individuals mind, so it is not surprising that a show focusing in on the architecture of utopias/an individual Heaven would identify largely the flaws in building such a place in one form for multiple people. As I watch more and the plot increases in complexity now that season 2 is beginning, I can’t help but wonder how I can be a better person and what my own individual Heaven would be like. And through the theme of death, there is equally as much to learn about life – it is afterall a key part of truly comprehending our human reality. What does make a good person; afterall, it is such a complex thing. And in the wise words of Eleanor Shellstrop, ‘Why do bad things always happen to mediocre people who are lying about their identity?’.