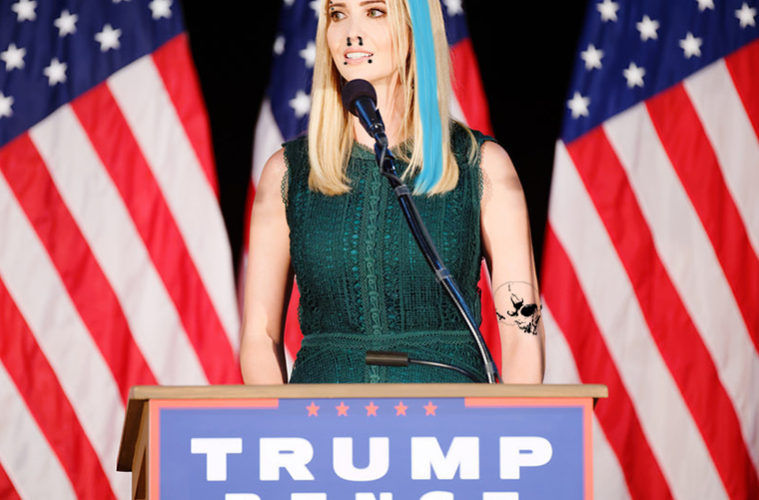 President Trump’s daughter, Ivanka, recently revealed in her mother’s memoir that she went through a “punk phase”. So we must be talking multiple face piercings? Some hidden tattoos somewhere? Possibly a shaved head and a large range of distressed denim and Doc Martens? Eh, not quite…

The people of Twitter were quick to mock when they discovered Ivanka’s phase consisted of blue hair, which lasted only a few hours, and listening to Nirvana… We’re not joking.

Ripped a fishnet stocking while getting out of the limo https://t.co/A6Vbn2jdcp

Ivanka wrote, “Mom wasn’t a fan of this decision. She took one look at me and immediately went out to the nearest drugstore to buy a $10 box of Nice’n Easy,” She then went on to say, “That night, she forced me to dye my hair back to blond. The color she picked out was actually three shades lighter than my natural color … and I have never looked back!”

At the time of Kurt Cobain’s suicide in 1994, a 12 year old Ivanka supposedly cried for a full 24 hours in her bedroom. “It was a shock and I was distraught. Mom had no idea who Kurt Cobain was, and she sympathized only so much.” She wrote.

Glad to see Ivanka accidentally walking into a Hot Topic once counts as news now. https://t.co/n5G3b7ILin

Ivanka Trump, punk as fuck in Aspen in 1998 pic.twitter.com/dWFg5zLOXD