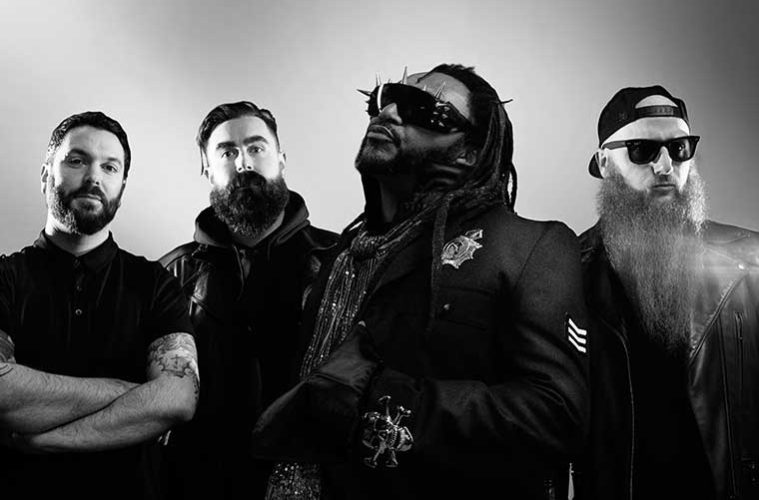 UK based ragga metal legends Skindred, are thrilled to announce their “Start The Machine” UK headline tour for April 2018, ahead of their forthcoming 7th studio album on Napalm records. The tour will feature special guests such as US opportunity rockers CKY, plus more acts to be announced. We caught up with the bands guitarist, Mikey Demus, to talk “new songs & tricks” for their live shows.

Q 1: Hey! How are things in the world of Skindred at the moment?

Things are really good for us right now, it’s really never been better. We’re on the cusp of our biggest headline tour to date and in the midst of writing our seventh studio record. Tensions and pressure are kind of high currently because it’s crunch time with the album – I’d love to tell you it’s all a breeze, but we’re in full on creative mode right now so there’s a good amount of stress flying around. We have a pretty tight deadline to get the record out, and we work in a fairly old school sort of way, so its go go go for sure. It’s a good creative stress though. It sounds kind of business I know, but we are in the business of kicking out the jams – and business is good!

Q 2: Can you tell us how you would describe yourself as a band and the music you make for anyone who doesn’t know your style?

We’re kind of weird, there’s a lot going on musically speaking. We’re all different people with different influences and directions, so when that comes together you get a sort of melting pot of sounds and textures. I guess we’re a rock band first and foremost, but there’s a boat load of electronic, reggae, punk, soul, dancehall and even bluesy influences going on here and there. People describe us as a reggae metal band but I think its way more than that. I never considered us a straight-up metal band, but we do enjoy existing in that world and the metal community has really embraced us, so I’m thankful for that. I’d ask people to take a chance on something different, 9 out of 10 cats can’t be wrong.

Busy as hell basically!  We wrapped up the summer of festivals in Europe then went straight out to Japan and Australia to do a bunch more incredible festivals and shows. I feel like I haven’t stopped in months, it’s great to be in demand and busy though. We got straight into writing the minute our touring commitments wound down, we are workaholics honestly. It’s shaping up to be a very bombastic album so I’m really excited. We even just finished shooting a video this evening for our first single which is exciting.

Q 4: Tell us about your journey into the music industry – when did Skindred first come about?

We met randomly, we didn’t grow up together and we’re all from different parts of the UK. So it’s a weird one! Basically Dan met Benji through a mutual friend, started writing with some other guys who couldn’t commit to touring and so on. After a few false starts, Arya and myself got the call (again through friends of friends) to join them both and the rest is history basically. We’ve been growing and working together for 15 years and we’re still going strong.

Q 5: Did you have any inspirations as a band and individually?

I guess as a band just like everyone, we wanted world domination and to be the biggest band in the world! We are still working on that, ha. We are still very inspired by all different kinds of music and life in general, and I’m stoked to be on the verge of releasing what could be our best work yet. Speaking personally, I came up playing guitar as a kid but never thought I would make a real go of it. I always wanted to be in a band so I was in one from the minute anyone would let me up on a stage! I’m more of a ham offstage than onstage, but I always loved to perform and jump around with a guitar. I’m still doing that now so I’m really grateful – basically what started as me not wanting to get a real job turned into paying my mortgage with a guitar, and I’m still making that work. So I’m incredibly honoured and happy to be doing that.

Q 6: You guys have just recently released your Start The Machine 2018 tour! What can we expect from your live shows? Any new material?

Well I’m not going to give the game away; you’ll have to come see the shows and judge for yourself! But yes there will be new songs, new tricks, flashing lights and at least one costume change. We’re doing a lot of our favourite rooms in the UK so I can’t wait, especially Brixton Academy which is always a fantastic venue to play. It’ll be a really great night out for those that come along to bring the rock! I can’t promise we’ll be back in the UK anytime soon after that, so if you’re on the fence about coming – get off it and bring the noise.

Q 7: How do you feel your music has developed since your first album Babylon?

It’s grown up, got super immature, got weird, got serious, got heavier, went super light, got heavier again, got smart, got way dumb, got turned on its head then had a serious think about what a naughty little creature it’s been… then got ready to come back stronger than ever before. That’s kind of where I’m at right now.

Q 8: You’re one of the UK’s most high profile and popular bands. What was it like in those early days of Skindred?

Just like for anyone else, who’s been around the block enough times, a lot of sleeping on floors, sleeping in vans, going hungry, fighting, laughing, working, working, working, thinking about giving it all up, working and more working. We’ve been dealt enough shitty hands over the years to have called it quits more than once, but the fact is we’re in a great place because we kept on going through bullshit and came out the other side. It’s a rocky road as a baby band, and I wouldn’t wish the troughs on anybody – but the peaks are the best thing you can do with your hands, head and heart… as long as there’s a bunch of people willing to jump up and down you can bet your ass we’re going to want to be there to do our thing. Long may it continue.

Q 9: Out of your whole career as a band, is there one show in particular that really stands out to you?

There are honestly so many, we love the UK festivals like Download, Reading/Leeds & Bloodstock, Sonisphere too was a killer crowd for us. We’re fortunate to have those kinds of shows all around the globe; seriously we’re spoilt brats with our live show! Our crowd is the greatest, even on those random support gigs where people aren’t sure what to make of it at first; by the time the gnarly looking biker dudes in the front row are smiling and nodding their heads, it feels like a real victory. We are totally spoilt honestly. I can’t remember the last time we really had a bad time on stage.

Q 10: You all spend a lot of time together, especially on tour – do you ever annoy each other?

You’d better believe it! We drive each other totally nuts, imagine being married to 3 random crazy ass people who are all about as different from one another as you can think. We love each other profoundly but trust me when I say; if we were differently inclined there would be blood, sweat and hairballs flying around the tour bus or studio constantly! We’re all grownups so we all have our own ways of decompression from one another, but most of all we all try to be respectful of each other to keep things moving forward. It’s the only way to make it all work. If we didn’t have that it would be pretty fucked. 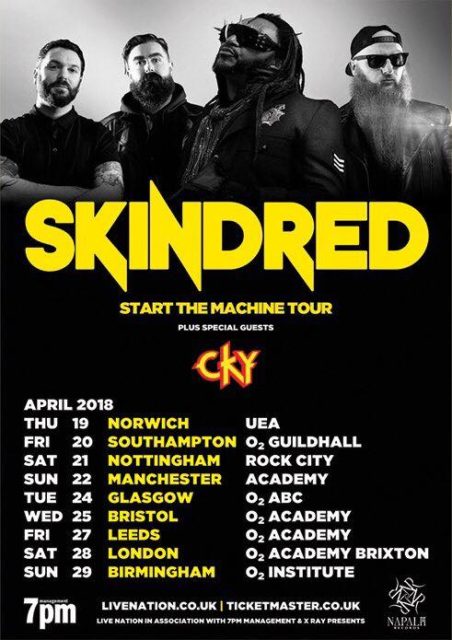 Search and destroy! We’re cracking down on the new record and our UK tour which kicks off at Norwich UEA on April 19th and will be the beginning of a really strong run. I’d love to say I’m going to take a year off to find myself, but reality is, we’ll be  taking this album door to door and carving Europe, Japan, Australia, South America and the USA a new one if I get it my way. I can’t wait!