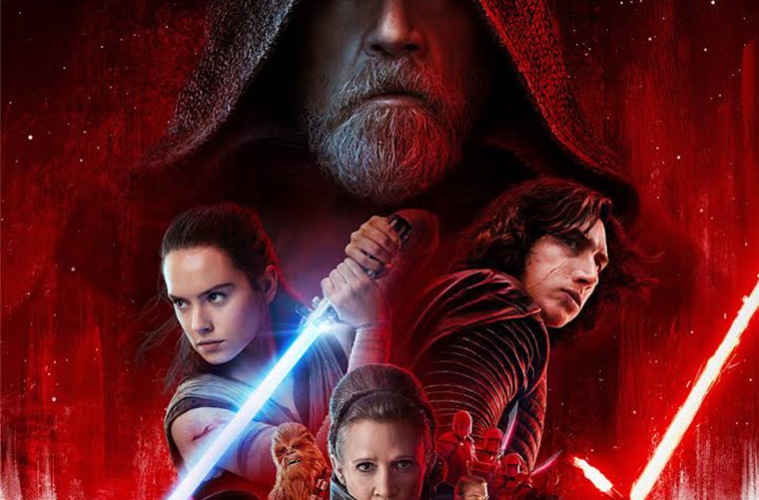 “Let the past die. Kill it.” Kylo Ren’s sith-lord semantics may have been better advised to J.J. Abrams than to Daisy Ridley’s heroine, Rey. Abrams’ previous episode in the series, Star Wars: The Force Awakens, was slammed by some for resembling the original 1977 Star Wars. But now the franchise has a new hope; Rian Johnson (Brick, Looper), whose visual flair is a welcome addition to the galaxy, but a galaxy amiss with faults nonetheless.

The previous instalment left audiences mourning for old characters, and intoxicated with the whirlwind of possibilities the new ones proposed – a blend of old and new that felt just the right amount. Picking up right where we left off, Rey is now in the presence of the legendary Luke Skywalker (reprised by Mark Hamill himself), on a remote and mysterious island far from the watchful eyes of the evil First Order. Meanwhile, The Resistance, led by Princess Leia (Carrie Fisher), is grappling with the Kylo Ren’s forces, as he himself battles internal conflicts of allegiance to Supreme Leader Snoke (Andy Serkis). Training processes and stranded spacecrafts reminisce narrative strands of the most popular instalment, The Empire Strikes Back, but has enough original ideas to distinguish itself from the original franchise; which inevitably, poses its strengths and weaknesses as the plot thickens.

Trying to review a film like Star Wars: The Last Jedi is quite the difficult task. With a big franchise film such as this, even the most minor plot detail can be considered a spoiler. Talking about the film’s misfires can reveal the involvement of characters thought long forgotten, or unveil shocking reveals that, although likely to leave impression, threaten to derail any sense of logic crucial even to the most elaborate works of fiction. This is certainly not the place to discuss such narrative elements, but it must be noted that they are there and may prove to dissatisfy those that have immersed and bought into the entire Star Wars mythos as of previous.

First of all, the film looks fantastic. Johnson has managed to craft a film that is the most visually appealing of the franchise since 1980, and for its admittedly excessive two-hour and thirty-two minute run-time, it maintains its gripping visual appeal. The creative team have struck a harmonious bargain, blending practical effects with immersive CGI, and although the latter sometimes wanes, it looks better than a vast amount of other contemporary blockbusters. The colour contrasts, particularly the use of red and white in the films climactic battle sequence, is superbly captured in its conveyance of a war for blood; a defiant last stand on behalf of the rebels. However, the big-budget visuals of this scene are diminished by the film at large’s tendency to treat death as something that can be manipulated. It has been a problem for audiences this year, with the particular example of Kingsman: The Golden Circle coming to mind, that death is not definitive. The Last Jedi seems to have forces threaten the lives of prominent characters but refuse to let them die, which has severe repercussions on the stakes of the remainder of the narrative. From the films first act, the idea of a character truly dying seems far-fetched, which damages audience investment.

The film’s opening sequence is exciting, and provides awe-inducing thrills that should be expected to persist through such high-concept filmmaking. Yet, the scene feels to be repeated later on, and feels too familiar to replicate the thrills of the initial prototypal sequence. The narrative feels quite locked to one location for the films intermediate acts, with the escape of character’s side quests failing to offer the intriguing exploration of other worlds one would expect from a science-fiction blockbuster. The island that Rey and Luke inhabit during their training sequences feels is a welcome addition to the series, and the creatures on display are welcome additions to the franchise’s mythos, but there are also other sub-plots that many will feel harken more to the prequels, rather than the beloved original trilogy. The iconography of new animals and creatures is sure to resonate, especially with a new generation of fans, and the Porgs offer some light-hearted comic-relief. However, the age-old tradition the films’ merchandising is surely reliant on, style-over-substance characterisation, is still an issue even in the eighth episode. Captain Phasma (Gwendoline Christie) as a modern-day Boba Fett is exactly what you would expect; minimal dialogue, glossy costuming and the personality of a walnut, and Snoke merely stands as a recycled arc of Emperor Palpatine.

Luke Skywalker’s character is a godsend to the narrative, and offers every scene he appears in considerable weight, and the film’s best scene rests firmly on his authoritative shoulders. Adam Driver is once again a wonderful choice as Kylo Ren, and his character development is handled very well to suggest overwhelming power spiralling into demise; a Vader reborn. The characters are there and ready to go from the start, and fan favourites from the last film such as Poe Dameron (Oscar Isaac) are given much more screen time. New characters are often used for plot device, which is fine, but they must be interesting enough to disguise their creators’ purpose, which often they are not.

There are narrative inconsistencies, drawn-out sequences and expansion of Star Wars lore that may rub some die-hard fans the wrong way. Otherwise, it provides a great deal of escapist entertainment, and it may help to switch off and marvel in the spectacle instead of trying to connect the dots. It’s a worthy instalment for sure, but it fails in the estimates of The Empire Strikes Back; an unfair comparison, but one audiences’ will surely make.