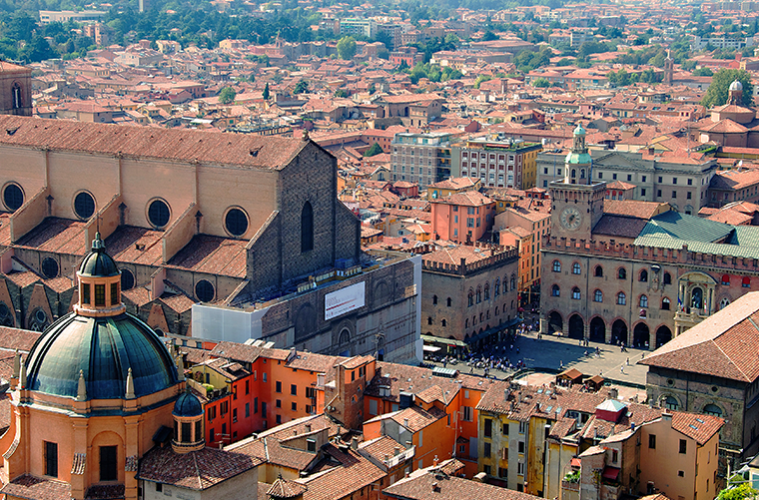 Bologna University is the oldest university in Europe. At one time, Nikolai Copernicus, Francesco Petrarch, Albrecht Durer, Umberto Eco, and others studied and taught here. It was the cradle of Italian science and education.

Prerequisites for the creation of the University of Bologna appeared in 1000 when the traditions of studying Roman law began to revive. Fundamentals of an in-depth study of law were laid by Irnerius, one of the first teachers and commentators of the code of laws of Justinian, one of the founders of the West European study of Roman law. In 1088, he opened his public lectures – from this moment on, the history of the University of Bologna is being kept.

However, at that time the university in the modern sense of the word did not exist yet. Professors lectured at home, in rented premises, and more often – on city squares. The popularity and fame of the Bologna professors were due to the scientific approach to the teaching and patronage of the Holy Roman Emperor Friedrich Barbarossa. In 1154, he officially recognized the university.

From all parts of Europe, everyone flocked here and formed their corporations. The collection of all student corporations under a general statute was, by the end of the 12th century, the Bologna University.

The heyday of the University was in the 12th century. It was during this period that Latin and Greek literature, medicine and philosophical sciences began to be taught. But the 13th century was a turning point in the history of the University. The municipal government of Bologna canceled student donations, subordinating the entire faculty to its own jurisdiction.

Another feature of the Bologna University is that it was the center of the study of jurisprudence. The study of Roman law, which initiated the university, and canon law, introduced into the program since the 12th century, remained the main subjects of university teaching.

Throughout the thirteenth century, the famous professors lectured here on philosophy and the liberal arts, in addition to jurisprudence. Such sciences as philosophy, Latin and Greek literature, and then medicine began to flourish in Bologna.

However, it was not until 1565 that the university found its own premises, and all the previously disparate schools and corporations were united under one roof. The University of Bologna considers its library an asset. It was founded in 1605 by Professor Aldrovandi. It stores about 250 thousand books and 1,350 periodicals.

Among those who studied at the University of Bologna were the poets Francesco Petrarch and Dante Alighieri, the astronomer Nicolaus Copernicus, the Pope Alexander VI, the physician and occultist Paracelsus, as well as the writer Umberto Eco and the Italian Prime Minister in 1996–1998 and 2006–2008, Romano Prodi.

In 1988, on the occasion of the 900th anniversary of the university, 430 rectors from all over the world came to Bologna to celebrate this event. Bologna University is still the mother of all universities and a key place on the international scale, even after losing primacy in research activities.

The classification, compiled by QS World University Rankings, placed the Bologna University on the 188th place in the world, the first among Italian, but still far from the American ones like Harvard or MIT, or the English Cambridge and Oxford.

Structure of the University

Currently, the University of Bologna has more than 85,000 students and has a special structure – the multi campus – consists of five institutions: Bologna, Forlì, Ravenna, Cesena, and Rimini. Also, the University of Bologna was the first in Italy to have a branch abroad, in Buenos Aires, which offers postgraduate courses designed to deepen the various aspects of relations between Latin America and the European Union.

The educational program of the University of Bologna covers all possible fields of knowledge, from basic to graduate and postgraduate. The courses offered are designed to meet the needs of the labor market and offer students a cultural and practical toolkit.

Bologna University pays much attention to research and international communication. Thanks to the work of research centers and laboratories and the high level of results achieved, the university annually shares its achievements and participates in various scientific competitions.

Those enrolled at the University of Bologna can also count on contracts concluded with foreign private individuals, firms to provide residence and study abroad and to obtain appropriate degrees.

When studying at the University, students have to prepare different kinds of works, including essays on negative effects of television and other topics, course works, presentations, dissertations, and others.

The central building, where the administration is located, is at number 13, in front of Palazzo Poggi. It has an audience dedicated to Carducci, who listened to lectures on Italian literature here.

Nearby, on the piazza Galvani, the building of the First University rises. Since 1838, in the palace there is a library of the commune, however, its main treasure is hidden in the anatomical theater.

In this hall of the spruce tree lectures on anatomy are held. Bombing during the Second World War destroyed most of it, but after it was restored and recreated according to original drawings. Today, without a doubt, the anatomical theater is one of the most outstanding proofs of the glorious university tradition in Bologna.