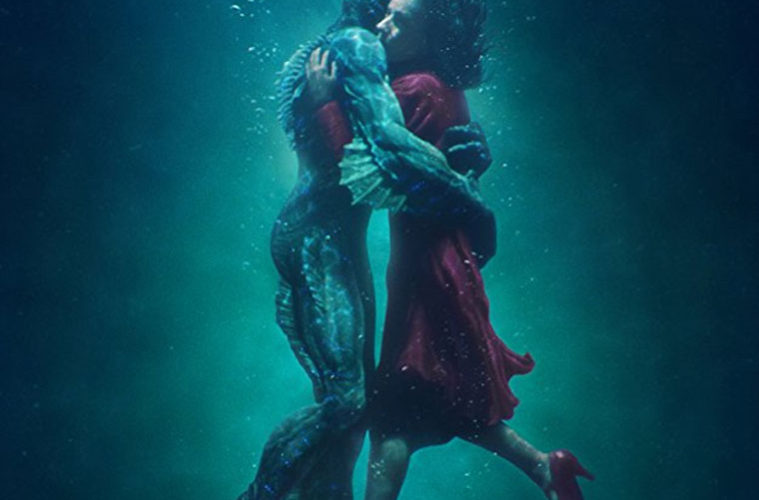 Film Review: The Shape of Water

There are certain directors whose style is so distinct, that it immediately jumps out at the audience from the moment a film begins. This cinematic calling-card can generally be found in the mise-en-scène – that is, the visual and design components which give any film its distinct character and feel. The likes of Wes Anderson and Quentin Tarantino fall into this category, as does Guillermo del Toro, the Mexican director perhaps best known for Pan’s Labyrinth and his distinctive brand of dark fantasy storytelling. The Shape of Water, his latest, is a visually-ravishing and sensitive film which is deserving of its thirteen (yes, 13!) Oscar nominations.

The opening shot of The Shape of Water sees the camera weave through an underwater landscape which, it soon becomes clear, is in fact, the interior of a flat and a serene figure is seen floating asleep above a sofa. The shimmering and subdued greens of the sofa, the walls, and the hazy light of this underwater world establish the tone for the rest of the film which treads del Toro’s signature line between reality and fantasy. It is a boundary which he is more than happy to blur and, in many cases, totally erase.

Awoken from her dream, the serene figure is revealed to be Elisa Esposito (played by Sally Hawkins), a mute cleaner who works at a government facility in Baltimore alongside her friend Zelda (Octavia Spencer). The year is 1962 and the Cold War is at the forefront of the minds of the facility’s leaders, including Colonel Strickland (Michael Shannon) who has captured an amphibious-humanoid creature in the lakes of South America and brought it to the laboratory to study.

Elisa and Zelda encounter the creature (played by Doug Jones) during the course of their cleaning duties, but Elisa forms a bond with him and begins to communicate with him using the sign language on which she depends in her day-to-day life.  But when Elisa discovers that Strickland intends to dissect the creature to help in the Space Race cause (and beat the Soviets), she hatches a plan to free the creature from its prison.

It is a narrative which, under many other directors, would seem ridiculous but, somehow, del Toro manages to keep the audience on side and craft a powerful tale of love. Much of this is down to the visual style of the film, which is dominated by a green palate which gives proceedings a fantastical edge. It also makes the whole film look gorgeous, creating the distinct worlds of Elisa’s work and her home life, where she lives opposite her friend and confidant Giles (Richard Jenkins), a talented artist but struggling with his identity and age (he finds comfort in wearing a toupee).

Much of del Toro’s talent lies in his ability to make everyday and mundane things radiate with beauty. Boarding a bus, running a bath, and boiling an egg are all filmed with a magic which makes the familiar seem rather enticing, reinforcing the dream-like world which del Toro inhabits. His love for the moving image is plain: Elisa and Giles live above a delightful cinema which evokes the halcyon days of cinema-going, although its starry lights outside fail to attract great numbers of people in to its warm and comforting interior. Giles always has an old film or television programme on in his flat and, during a sequence which will either lose or captivate you, Elisa is transported into a dance number with her the swamp monster as her own Fred Astaire.

Sally Hawkins is perhaps the main reason that this del Toro’s fantasy/romance works. She is utterly charming and entirely convincing as the mute cleaner, articulating both the frustrations and advantages of communicating with sign language. The developing romance between her character and the amphibious creature naturally leads to sex – a preoccupation of the film – and Hawkins’ commitment to the role (she does several full-frontal scenes) allows these rather strange encounters to succeed in cinematic terms. She certainly carries the film, and is well supported by her fellow cast members: Octavia Spencer gives an energetic and likeable performance, as does Richard Jenkins, his kindly but conflicted gay artist quite the opposite to Michael Shannon’s viscous and dark Colonel.

In The Shape of Water, del Toro has managed to steer clear of the unrestrained artistry and imagination which has, at times, alienated some people to his past films. Instead, his bold creativity is more nuanced and is balanced by a sense of the ordinary which, conversely, makes the film feel that bit more like a fantastical fairy-tale. The implausibility of a woman falling in love with a swamp creature suddenly takes a back seat to the unfolding drama, which is fashioned with care and compassion, and filmed with great visual flair. The whole cast, but Hawkins in particular, deserves as much credit and, should the film triumph at the Oscars, I for one, will be very happy.