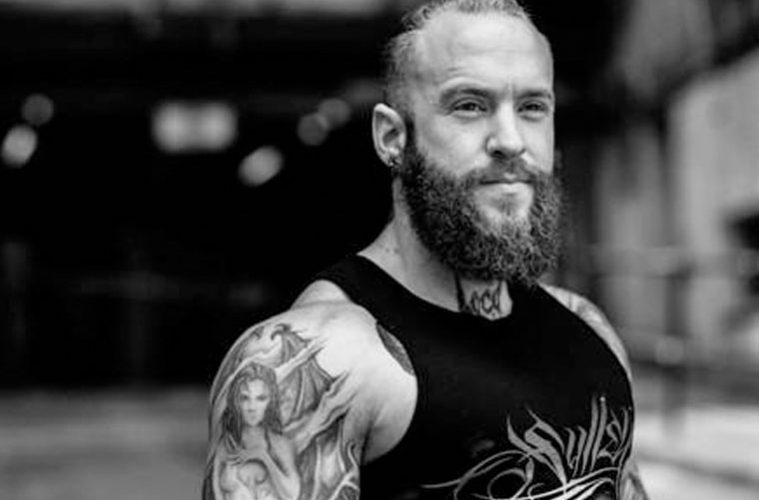 “Loco” Mike Mason is big. There’s no subtle way of saying it; the guy is built like a brick sh*thouse. But there’s much more to him that just muscles. The SPG sat down with Mike and got the low down on life as an Alt Model.

Hi Mike, so tell us: how did you get started as a model?

I started as a pro wrestler. As a part of that, you need to get promo photos. I met some photographers who liked how I looked, and wanted to photograph me away from the wrestling stuff.

What does a shoot involve? Are you told to just “stand there, do this,” or is there a bit more to it?

There is definitely more to it than that most of the time, thankfully! I have done a few shoots where there hasn’t been too much planning, and the photographer says “just be yourself”. I find those shoots difficult. It’s like, “ok, be myself. So you want me to be shy and awkward, and sit here and read a comic book?”.

Like I said though, most aren’t like that; we usually go into the shoot with a lot of prior planning. The photographer would have put together a mood board of images to give me an idea of what look, feel and style they want from me.

On the shoot day itself, you get changed into the outfits, and get hair and makeup done if it’s that kind of shoot, to get the appropriate look. Then it’s a lot of trial and error with positions, poses, angles and lighting to capture what the photographer has in their head.

What do you do to promote yourself? Presumably you don’t just stick a sign up in the local newsagent…

Social media plays a big part in networking these days. You want your work to be seen by as many people as possible, so getting “likes” and “shares” may sound silly, but it’s important to build up your online reach. Designers and brands who may want to book you take that stuff seriously.

Of course there are portfolio hosting sites, which directly deal with the modelling and acting industry, where you can upload your images and respond to casting calls. 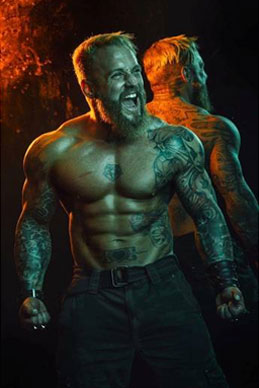 What’s the best type of shoot for you? Do you prefer fantasy, historical stuff, or gothic stuff?

I like the final images I get back from my fitness shoots, because it captures the hard work which has gone into creating it: the months of dieting and training to sculpt the desired look; the flexing and holding the poses at the shoot until your muscles are cramping. It’s all real hard work, but when you get those images back, you see that it was all worth it.

The most enjoyable shoots for me though are the character modelling ones. Sometimes that involves hours of makeup and prosthetics, or months of having specific costume pieces made, but once it’s all on, I can become someone fantastic. Someone out of this world. It brings me back to my wrestling days, and walking through that curtain and becoming someone else. I really enjoy portraying the characters. I want people to be like, “holy shit! There’s a demon” or “there’s Conan!” – not just look at me and say “There’s Mike Mason in makeup”.

I’ve got to ask: what’s your gym routine?

I train 6 days a week; about 90 minutes a day. The type of training changes depending on what I’m training for, but it’s always about 60 minutes of resistance training (weights), doing muscle group split routines, and 30 minutes of cardio. The gym is actually the easy part; it’s the dieting which is hard! Again, that changes depending on what I’m training for. For one shoot, they might want me as a Viking so I’ll be covered up – they won’t care about abs but they will want me looking as big and strong as possible. I’ll be having to eat 4,500 calories a day, and carbs with every meal for that. For another shoot, they might want me just in my underwear, and the briefing is ‘lean with abs’. For that I’ll be cutting my calories back to 2,500, and sticking to low carbs. That’s a big difference!

Being covered head to foot in tats, you’ve got a pretty unique look. Is it better for a model to stand out or to be a bit more generic?

It’s swings and roundabouts. I have had a lot of bookings due to my overall look with the tattoos and there have been other times where I have lost parts because they didn’t want visible tattoos. I still feel it is good to have a unique look rather than generic; it makes you memorable rather than forgettable. As soon as a client says ‘we want a muscular, tattooed guy for x, y and z’, I know the photographer in his head is already saying “Mike Mason”.

I was booked to wrestle on a burlesque cabaret show. In full body make up. As my demon character.

If you were stuck on a desert island with Bruno Mars and a talking bowler hat, who would you eat first?

I’m guessing Bruno Mars has a higher protein content, so him.

Would you use ketchup or mustard?

I don’t think a little ketchup would affect my macros too much.

Any advice for those looking to get started in alternative modelling?

Pay a good photographer to help you start your portfolio, and do networking; lots of networking. Get your images seen. No point in having amazing images if no one sees them.

And in the words of The Joker: if you are good at something, never do it for free.