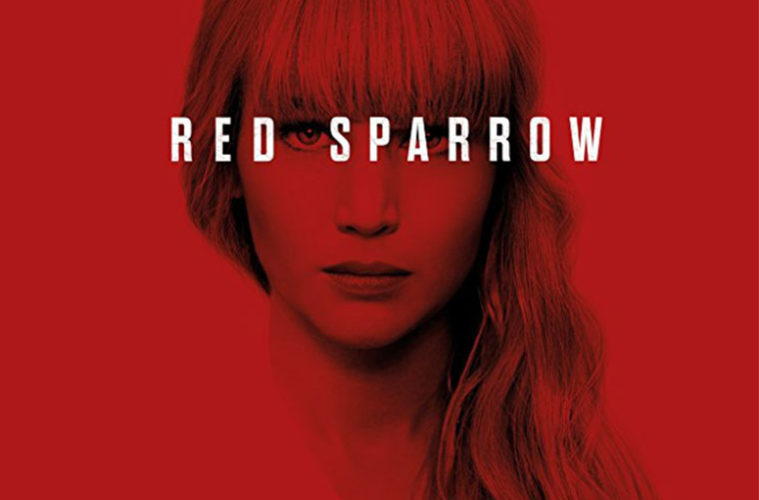 Since her breakthrough role in 2010’s Winter’s Bone, Jennifer Lawrence has become one of the most famous of Hollywood actresses. Indeed, her films have grossed over $5.5 billion at the box office and she has gathered millions of fans through her endearing “I’m-just-a-normal-woman-in-a-crazy-industry” public persona. Oh, and she won an Oscar for Silver Linings Playbook. With such success comes the luxury of being able to pick from a wide range of roles and projects to work on, allowing her to move from more independent projects (such as Silver Linings) to big-budget superhero blockbusters (X-Men) and art-house projects such as Darren Aronofsky’s mother! This genre-hopping is perhaps an attempt to move on from her role in The Hunger Games which gave her a core fanbase in the Young Adult fiction world. This evolution continues with her latest film, Red Sparrow, a shockingly-violent and grim spy thriller which – despite its graphic nature – fails to leave a lasting impression.

Directed by Francis Lawrence (no relation of Jennifer, but a previous director of hers on three Hunger Games films), Red Sparrow is one of those spy films where double-crossing is the name of the game and, quite frankly, even if you had the script in front of you, you’d still be left rather confused at the end. Lawrence plays a Russian Bolshoi ballerina, Dominika Egorova who, when injured, is recruited by her rather insidious uncle (played by Matthias Schoenaerts) into the Russian secret service so her mother can continue to receive medical treatment. Dominika is sent to an elite training school which is overseen by the stern Matron (played by Charlotte Rampling), with the intention that she will become a “Sparrow”: an elite agent trained in the art of seduction and ruthless espionage.

Aside from the rather weak plot motivations which see Dominika inducted into the brutal training regime, the script relies on betrayal and double agents far too much, leaving the audience confused about who is trusting who (and not in a good way). It results in a meandering script which could do with tightening and a much clearer narrative thrust. The script also sketches out diplomatic tensions between Russia and America in the shape of Joel Edgerton, playing a CIA agent who becomes entangled with Dominika, and Jeremy Irons as a greying Russian General.

The resulting plot twists and turns over 2 hours 20 minutes and, whilst not without merit, fails to engage the audience on an emotional level. Despite the gore and violence which punctuates the spy talk, the film plods along and fails to make the most of what could have been an interesting idea: themes of family, love, patriotism, and female empowerment are touched upon, but never weaved together to create a strong thematic tone.

Part of the problem lies in the film’s sexual politics. Scenes of rape and other sexual encounters are framed in terms of their violence and, more often than not, are transposed onto Lawrence’s character with little thought. Now, whilst Dominika does assert herself on several occasions, it feels a little too exploitative when there seems to be little self-awareness about such issues. Dominika seduces her way to those (men) in power, and some have argued that the camera all-too-often represents the male gaze. There’s some graphic male and female nudity (Jennifer Lawrence has said it was empowering to choose to be naked in the film after intimate photos of her were stolen) and the film is, in general, rather fixated on sex and its implications for control and influence. It all feels superficial.

That said, Jennifer Lawrence remains a captivating screen presence, although her Russian accent (along with the majority of the cast) threatens to get in the way and undermine the realism for which the film clearly strives. She throws herself fully into the role and does well with attempting to draw emotion from a difficult character. The audience, however, is never really given the chance to engage with her character’s story. Whether or not this is a deliberate move on the part of the filmmakers to reflect the emotional void created by the Sparrow training program, is open to debate, but for a film which emphasises elements such as eroticism and intense violence (the two often go hand-in-hand, making for uncomfortable viewing), the empathy to counterbalance this is lacking.

On a visual level, the film is often striking, especially in its framing of cities such as Budapest – cold, anonymous and rather alien landscapes at odds with the rich and luxurious tones of the hotels where Dominika conducts much of her professional business. The actions sequences too, startling in their frenzied and graphic nature, work on a functional level but, yet again, the lack of affective engagement renders them shocking only in terms of their content, rather than in their narrative power.

Red Sparrow is serviceable in terms of its sense of high-stakes espionage and its full-on approach to violent confrontation. But the film’s problematic sexual politics and its treatment of sexual violence damage it as there is no emotional foundation to make these moments feel appropriate. Lawrence doesn’t do herself a disservice in the film, and taking on such a role feels like a natural progression in terms of her career. But despite her ability to enchant a film camera and some nice cinematography, Red Sparrow ends up being a protracted and wandering thriller which relies far too much on shock value to deliver its message. Quite what that message is, however, remains something of a mystery.

Have a read of another review of Three Billboards outside Ebbing, Missouri.