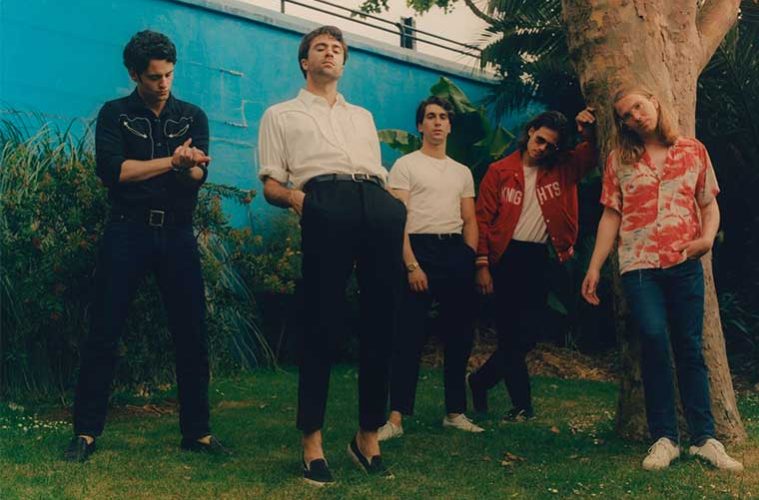 Since the formation of The Vaccines in 2010, the Indie rock band have gained masses of fans around the world with their energetic and unique sound. Although the band have been out of the public eye for a while now, they definitely haven’t been resting. We caught up with The Vaccines to discuss their writing process, meanings behind their upcoming album ‘Combat Sports’, and how they’re planning to take 2018 by storm with their return.

Q1. How’s everything currently going with the band right now?

We’re very well, and very excited. The album is coming soon; we’re releasing it in 10 days.

Q2. How would you describe the band to anyone who hasn’t heard of you yet?

Wow, that’s difficult! We’re a modern rock and roll band, which I think is very different to rock music; rock and roll is a very specific thing.

Q3. What is the best gig or festival you’ve ever played and why?

In 2011 we played the Isle of Wight festival; we’d been on tour in America at south by southwest, which is a big gathering for the industry and lots of new bands. There was a slight buzz around us, but we were comparatively quite anonymous compared to all the other things that were happening there. We’d only ever really played to 5 or 6 hundred people max, and we had then come back to England when the album had come out, which I think was number 4 in the charts, and we played the Isle of Wight festival in a tent. There must’ve been about 30 thousand people, and it was completely swollen – the tent – I just remember that I never thought I’d ever experience something like that. It seemed like it was a mistake almost, like maybe they were there for someone else. We went on and played and everyone knew every single word and it was just mind-blowing. Then after that it became quite regular, but the first time it happened was such an amazing experience. I’ll never forget it.

Q4. What should fans expect from the new album ‘Combat Sports’?

It’s a bit more grown up; we’ve grown up a lot and the sound of it is much more mature. It’s much heavier sounding – it’s a rock record and it’s the first time we’ve managed to do that. I think we initially made quite energetic indie-rock and roll and it’s hard to put it down to genres, but it’s just a meatier, slower, heavier rock record. I don’t know what people think of it, but I’ve been wanting us to do something like that for a long time now so I’m very happy about it.

Q5. What’s the inspiration behind the lyrics and music video of ‘I can’t quit’?

It’s about addiction and struggle. Struggle with yourself, with the outside world, repeating the same mistakes over and over again. That’s the theme of the album really; it’s an album of perseverance and, hopefully, victory – struggles within the band and within ourselves, and struggles with what it’s like being a human being within 2018. For the music video, it’s very difficult to set a narrative in 3 minutes because songs are very short, so really we wanted to just do something which is effusively rich, and we always liked gang movies and gang imagery, so that’s where all the matching clothes come in along with the volatile nature and sound of the album. Some of the circumstances of making the album are where the blood and the beating and the bruises of everything comes into it.

Q6. How was the writing process for ‘Combat Sports’?

It was long, as per usual there were over 50 songs which were written. We were in a room together working all hours and it really took us quite a long time to actually find the right direction we were going. Again, it was perseverance that even when you haven’t got any songs which you think are good enough, you have to just keep coming back and keep working on it until you start to crack it – then you can crack it some more. It was a very imperfect process; you don’t go from A to B, you go from A to Z to Q, you go all around and then eventually you get where you want to go. I think that’s the way you do it – it’s like mining for gold: you have to dig up a lot of dirt until you have enough gold which you can do something with.

Q7. What inspired the name and cover art for ‘Combat Sports’?

When we were in the studio, a couple of the band members started boxing. The big Conor McGregor fight was on with Mayweather, and there was just a lot of cage fighting culturally. Combat sports became quite popular, so it went on a list of names. Justin and I had a bit of an altercation in the studio towards the end of the process, and he just said to me “what about Combat Sports”. I thought that was brilliant; to me it sums up the sound of the album which is quite abrasive, heavy, and sometimes quite aggressive – but then also the spirit of the album, which is not aggressive – it’s really just about overcoming yourself to do something which is important to you and persevering with that. For the cover art we wanted to do a little bit of a nod to the first record, with the hug, but it’s a bit more of an abrasive version of that. We have the song ‘put it on a t-shirt’, and I wanted to have the name of the album on a t-shirt, so it was just a combination of a few ideas. But I like it because you can’t really tell if he’s being pushed down or helped up; you don’t know if he’s exhausted or he’s just passed out drunk. I like ambiguous things. It isn’t overt, and I think it looks the right amount of abrasive.

Q8. Any other plans apart from the album release for 2018?

We’ve got a tour in April – a lot of festivals. Quite interestingly we’re working on some new music for the end of the year. To be honest, we’ve been sitting in a room in London in the rain and the cold and just chipping away at making this album, and I think now we deserve a bit if travel and a bit of fun. There’ll be no heavy lifting.

The Vaccines will perform at Community Festival in Finsbury Park, London on Sun 1st July. Tickets at communityfestival.london