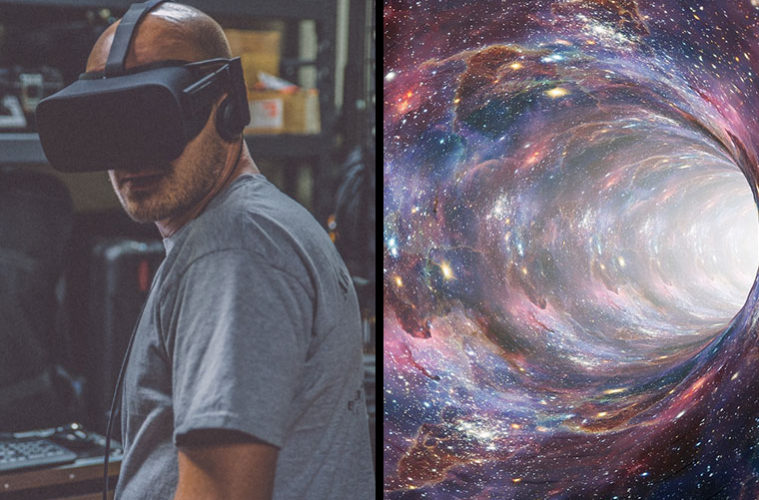 Diving into the wormhole – augmented reality

An augmented reality, the stuff Matrix is made of.

For many the theory is not a theory at all. It’s science fiction and confined within such books, movies and comics but never to leak into reality.  Who can blame the initial resistance and the scoff that follows when one even entertains the idea? The proof is in the pudding. It’s the technology we have today, topped off with 50 years of advancement. This is our very familiar classic progression of technology. Tugs here and there, having us witness the ever increasing scope of such technology, becoming more proximate to reality than ever before and hey presto; your virtual reality may as well be mistaken as the reality.

Have you seen the professional virtual reality billiard champion, who tries to lean against the non-existing, virtual billiard table and quite spectacularly tumbles down when he finds nothing to lean on? He wore the virtual reality headset, he was acutely aware that there was nothing but space around him and while today’s virtual reality graphics aren’t nearly as sophisticated as to trick us into accepting it as our primary reality, the focus on his game him had him unconsciously accept the visuals cues around him – close enough.

The rationale; within our incredibly large, ever-expanding space, alien life is statistically probable. Of course this can be as seemingly tiny as microscopic bacteria but taking into consideration that we exist, it wouldn’t be farfetched to assume that there couldn’t be more intelligent beings out there, or at the very least, an identical earth, whose population simply advanced quicker than us (whether that is because it was created earlier, smaller number of catastrophic events taking place or generally less blockage to technological progress i.e. religion).

We see a culture of avatars we have embraced online. Games like SIMS, which we attempt to customise to reflect our physical characteristics as closely as we can. The uncanny resemblance gives you a direct, personal connection – a more realistic gaming experience. For anime lovers out there, Sword Art Online depicts a futuristic world where the gamer simply pops on the nerve gear – the virtual reality headset, and remains physically still while moving around within the game.

For those interested in the specific workings of the headset within the anime – the nerve gear sends fake signals to the brain at a frequency unique to it. The nerve gear then produces artificial waves to stimulate the brain to provide artificial senses. Your avatar moves by reacting to your brain’s commands. Note – I have no clue how the brain works or whether this theory is even remotely fathomable.

So I ask you. Are the chances that within this space, a bunch of intelligent beings made us or rather – programmed us at 0? No doubt, our fellow scientists would be partial to exploring similar territories if our technology were advanced enough. Only our current reality has the best graphics out there.

How about fingerprints? Such an uncanny way to distinguish every single human being through an imprint on one’s finger. Almost like a barcode, almost like a way to keep track of anyone at all within a population of 7 billion, without looking like a grocery product.

It is absolutely far-fetched, but seemingly no more so than believing in an overall creator. In this case, we’d have a creator too. Only our creators aren’t some holier than thou existence but flawed creatures much like ourselves, trying to see what happens if. I mean imagine this – you thought up a completely theory-based ideology that you believe will improve the world and provide equality for all. But you don’t know how it’s going to play out, the gap between thought and execution has consistently been proven to be remarkable to say the least. So you turn to your self-crafted, virtual word that is earth, incept the idea into a person (or a group of people of influence) and have it spread over time and take hold. See how it plays out when flawed humans attempt to implement a seemingly lucrative idea. Communism was a bust, our creators make note of this and craft an alternative theory.

Wouldn’t that actually be a great way to go? An entire world to act like a guineapig to test out all your ideas. Ethics of course are more than just a little fuzzy because you are pushing suffering on seemingly conscious beings (us) but it’s like the divide between life-like robots and humans. They look, act and think like us but ultimately, they aren’t real. The mere awareness (though conflicted with the confrontation of clear consciousness within these AIs) that these aren’t real, gives you enough of a reason to dehumanise on quite legitimate grounds. I can see us going there, so why wouldn’t someone else?

Have a read of savvy ways in which tech is shaping higher education.