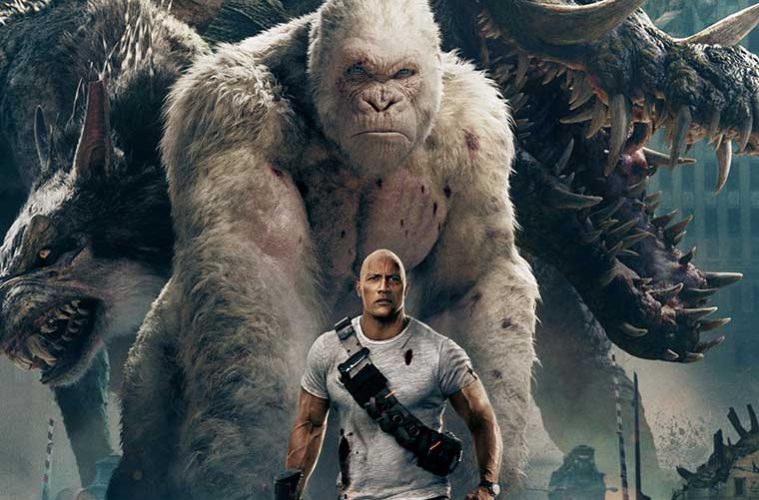 Dwayne Johnson has become one of Hollywood’s most bankable stars, with his films making literally billions of dollars at the box office. One of his first film appearances back in 2002’s The Scorpion King earned him $5.5 million. Not bad for the wrestler-turned-actor who has recently been praised for speaking publicly about his experiences with depression – stereotypically at odds with his tough-guy persona and physical prowess. His is a name which can attract cinema-goers around the globe, most comfortable in action films which play to his strengths (pun sort of intended) in terms of sheer muscle and the amiable twinkle in his eye. In Rampage, his latest crazy blockbuster, The Rock continues with this winning formula, supporting a monster disaster film which just about manages to keep its head above water, thanks to his likeable performance.

Based on the 1986 videogame of the same name, Rampage is about as derivative as sci-fi monster films come. Johnson plays Davis Okoye, a former anti-poaching operative now turned primatologist, who looks after a colony of gorillas in America. When a scientific space station suffers what can only be described as a catastrophic failure, samples of a top-secret pathogen hurtle to earth, and one of them lands in the gorilla enclosure, infecting Davis’ favourite albino gorilla George. The pathogen turns George into a violent and very, very big animal, and Davis must try to convince the authorities that he can handle this new mutant beast. Of course, George isn’t the only animal which has been infected, and a wolf and an alligator-type creature also grow to a size which rivals even that of The Rock.

It would be fair to say that carnage ensues, as the creatures are controlled by the evil creator of the pathogen, played by Malin Åkerman. Davis teams up with scientist Dr Kate Caldwell (played by Naomie Harris) who had a hand in creating the original pathogen but who may also hold the answer to stop the rampaging monsters. The mutants, predictably, appear impervious to the US military’s bullets and rocket launchers, making for some rather bonkers action sequences in which tanks are flung around Chicago like loose change, and where skyscrapers come crashing down with uneasy familiarity. Monster movies have always been proxies through which America has mediated its very real-life concerns, vicariously negotiating issues such as war and race. Rampage is little different, although quite what the albino giant signifies is open to personal interpretation.

The CGI effects are quite impressive and, alongside Johnson and Harris’ engaging and confident performances, the narrative chugs along quite nicely. The action never drags and some jaw-dropping moments stand out thanks to the cinematography which slows down the moment that the huge wolf jumps off a cliff to ensnare a helicopter in its massive jaw. Later on, the camera arrestingly encircles a skyscraper as the three beasts climb to its summit. Its ridiculous, but good fun.

You’ve seen the plot many times before, and a shot towards the end of the film invokes King Kong so much that the filmmakers may as well have inserted clips from the 1933 classic or Peter Jackson’s 2005 update. Directed by Brad Peyton, who worked with Johnson on disaster movie San Andreas, the film doesn’t attempt to do anything original but, in many ways, that doesn’t matter. It knows its target audience – teenage boys with an appetite for monsters, military hardware, large-scale destruction and the odd “son of a bitch” thrown into the dialogue for good measure. There was a surprising amount of violence and swearing during proceedings, although the fantastical element and Johnson’s amicability probably went a long way for the BBFC to give it a 12A.

Rampage is as mad as it is spectacular, although its uninventive narrative and well-worn genre tropes prevent it from becoming anything other than a loud and brash blockbuster. Dwayne Johnson and Naomie Harris do a good job of anchoring the action, and yet again prove that even the wildest of films can be enjoyable when the casting director has done a good job.