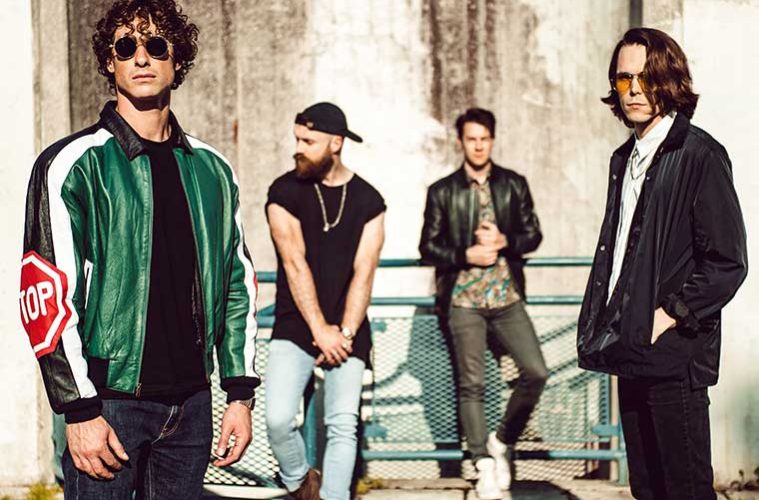 Since breaking into the UK album charts in 2012 British rock band Don Broco have taken the rock scene by storm with their unique combination of all things pop, rock and indie. Fresh off an American tour, Don Broco recently released their third album worldwide and have plans to get their music out to as many people as possible. We caught up with front man Rob Damiani about their latest album ‘Technology’, upcoming tour and what the rest of 2018 has in store for them…

We just got back from America a few days ago and we were straight into rehearsals for our next UK tour which started on the 23rd. We’re off to Ireland starting out in Dublin and Belfast, then we’re back to England doing all the cities we missed out on our last tour in February, so a load of dates in Sheffield, Liverpool and Oxford.  Unfortunately, there hasn’t been any rest bite as we’ve been straight into rehearsals getting the songs ready. We didn’t play all the songs from the new album on the last tour, after you record them in the studio you don’t really play them after unless it’s for a performance, so it’s been a few months since we’ve actually played them out. For a lot of the songs it’s the first time we’ve played them all together in a room, some songs we wrote together and some songs we’d be writing in the studio and recording straight away. So the other day was the first time we actually all played a lot of the songs for the first time all in the same room which was cool. It’s sounding really good, we’re pumped to play and spice-up the set and everything.

Q2. How would you describe Don Broco to anyone that hasn’t heard of you yet?

I’d say we’re a rock band. We love our heavy music, we love our pop music, we listen to a little bit of everything really and we all have quite varied taste, so if you listen to one of our albums it’s a bit all over the place. We very much try to incorporate everything into an album, churn it all together and see what happens, we like to think it creates something that a rock music fan hasn’t quite heard before.

Q3. How has the response been from your latest album ‘Technology’?

It’s been amazing, by far the best response we’ve ever had from an album. Which is everything you’re striving for every time you write new music; you want people to like it as well as liking it more than the last stuff. That seems to be the general consensus with our fans and everyone else, which is great because we love all our albums. When you’ve just worked super hard on the latest album with it being very fresh from all the effort and work you’ve put into it, you obviously want people to be enjoying it, which luckily they are.

Q4. Technology seems to be a running theme throughout the album; from the name of the album, to the storylines of some of the songs. Was this a planned idea before you guys sat down to start the album?

It was something that we hadn’t really considered until we were thinking of the name for the album and then found that with a few songs on the album the theme cropped up. I’ve never written a concept album or had one central theme that I write around, it’s always been something that reveals itself to me afterwards. Technology is something that as time goes on I find myself becoming more and more frustrated with the modern world and the way people are so dependent on it. It changes people; they act quite differently around it, for example: how they portray themselves on social media platforms. It felt like an interesting thing to explore within the albums themes. In regards to the title track ‘Technology’; the video for it was a super fun take on social media at gigs and within the world. It shows how I feel like almost everyone I know, including myself, is guilty of finding someone at some point being on their phone not concentrating or trying to do two things at once. You really sometimes have to take a step back and think ‘whoa what the hell is going on’.

Q5. What was the writing process for the album ‘Technology’ like?

This time it was very sporadic, we had a few songs that we’d be working on while on tour, then we’d take a little break during touring and go to a studio. We went to a studio in Belgium, we did some studio time in hackney in London and we went to a residential one in the UK as well. It was really spread out over a lot of different places, a lot of the parts of the songs we recorded on our laptops ourselves and just mashed it all together at the end. There wasn’t really a set period of time unlike other albums; we carried on touring so it meant that we’d have these breaks throughout the process. It was all very much broken up by real life digging, which perhaps influenced the album in the sense we wanted to write an album that was going to go great live and be super fun to play. So there were a lot of different approaches this time. 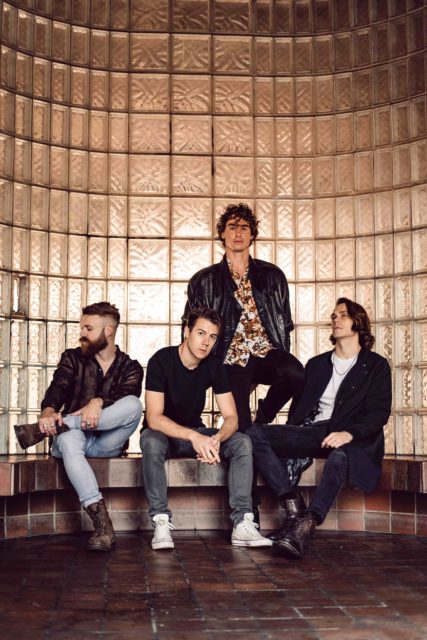 We started a UK tour on the 23rd April and then afterwards we are off to Europe for some more gigs, hitting up a load of countries, such as doing some festivals in Germany. Then we’re back to America, we’re doing Warped Tour for the first time which is one of those legendary tours that we grew up hearing about and wanting to go to, but we couldn’t because it’s in America and we were stuck at school in England. Once we started a band it was one of those things that you want to do and ticket off a bucket list. We found out that it’s the last ever Warped Tour this year and we were super gutted to hear that, but then we got the offer to go play it so we’re very honoured to be going out and doing the last ever Warped Tour in America. We get back from there and then literally the week after we’re doing Reading and Leeds festival.

Q7. How did the formation of Don Broco happen?

We were all friends from school before; me, Matt and Simon. We’ve been playing in the band since we were about 12, we went to university then came back not really knowing what to do like a lot of our friends, not having jobs we thought we’d start the band up and give it a go and see what happens,  it just carried on from there really.

Q8. What would you be doing currently if you weren’t in the band?

I have got no idea that is a question I do ask myself now and then when I try and think about it. I did Seaology at university which isn’t the most vocational of degrees so pretty much the band was always the plan. Within the last year of being students we’d all decided we wanted to be in a band and when we finished it was our first choice of what to do. The only part time jobs I had were working in a call centre and being a support teacher for a short time. While it was super enjoyable and rewarding as a teacher I wasn’t sure from my limited experience doing it as I was only a junior support teacher if I was really cut out for it. It’s a lot of hard work, I’ve got so much respect for teachers, it’s literally the most intense day you will ever have. There’s not even your lunch break that you’re really on break, every day when I got home from that I was just the most tired person I’ve ever been. I’ve never really thought about it so who knows!