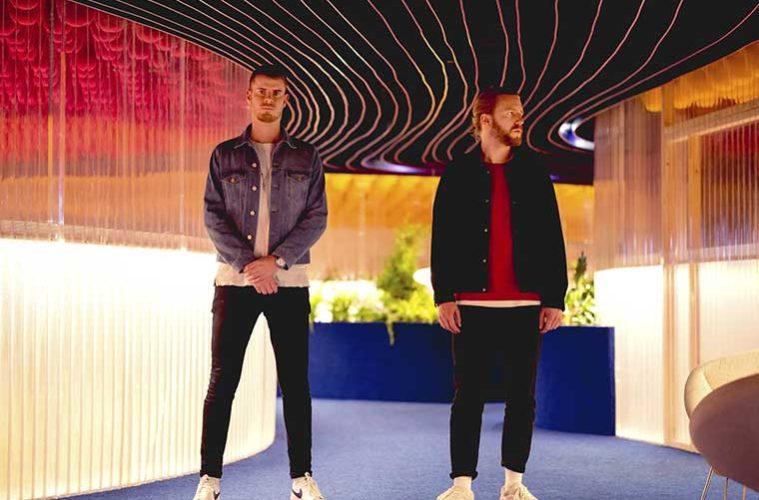 Drum and Bass duo Wilkinson and Sub Focus have collaborated on their most recent track ‘Take It Up’. They First burst into the D&B scene when they emerged on RAM records run by Andy C and have since built up masses of fans in the fast growing D&B world. We caught up with Wilkinson and Sub Focus to discuss how their long awaited collaboration finally came about, their journey into success and this years exciting plans…

Q1. Hi Wilkinson and Sub Focus, thanks for taking the time to speak to us! What was the first record you ever bought?

Sub Focus: I think selling out Brixton Academy was a big one.

Wilkinson: Within drum and bass, songs that I’m really playing are the new song from Mefjus called ‘If I Could’; I think it’s really cool and the remix of Camo & Krooked ‘Broken Pieces’. I think there’s quite a lot of nice musical but atmospheric emotional drum and bass stuff at the moment, especially coming from the techy sort of drum and bass. Also, 1991 are coming through, they’re really cool, and I’m playing a lot of his stuff.

Sub Focus: I think Culture Shock is so underrated man, he’s an old friend of mine and I really like the stuff that he’s doing lately, as well as one of my top tracks currently being Techno by Dimensions. A lot of these great guys are new artists that have come through in the last couple of years.

Sub Focus: I think you’re right, it was quite uncommon but I think people are starting to do it more now. It’s nice for me and Mark because we always work on our own, it’s always cool to get a lot of other peoples input.

Wilkinson: Yeah I feel like it’s a lot easier for Grime artists to do it because a lot of them guys just do a verse then give it to someone else, and they do a verse and come up with the whole concept together. But at the end of the day you’re recording vocals so someone else is doing the beat. With me and Nick (Sub Focus) being producers usually you do it on your own, well I know a lot of big producers are better off on their own because you have this idea in your head, your own path, you know the techniques that you’re used to and you develop those techniques on your own. But for me it’s really nice working with Nick because obviously he’s a big inspiration, but also you bounce ideas off each other and you create something that you wouldn’t have created on your own. It’s a good learning process, I think it’s a bit of peace of mind as well as it takes a lot of the pressure off.

Sub Focus: You basically just pick up techniques off other people, sometimes I go for months without doing anything collaboratively then I remember it’s good for you to do that. But I’m also very mindful of when I’m with other producers to bring techniques to the table that they might not use, so it feels like they’re getting something out of it as well.

Wilkinson: Yeah I think it’s a nice way of working, I think it’s going to happen more and I think it brings the scene together a bit more as well as it can be quite isolating, you know the only time we all meet up really is at gigs, so it’s nice to meet up out of that. You can pull the scene forward as well by collaborating and talking about it so much.

Sub Focus: People always talk about a cutting house called ‘Music House’ where DJ’s used to have to cut a record before they could play their new song, so they’d go to this cutting house in North London in Holloway and it was a big meeting point for all of the different producers – they’d all come down with their tracks and play them to everyone, and DJ’s would cut them, but it would be a great exchange of ideas. It’s nice to make it more social again.

Q5. How did the collaboration of Wilkinson and Sub Focus come about?

Wilkinson: I went to Nick’s (Subfocus’) studio and we played around with some ideas about a year ago, but we didn’t manage to finish that idea so we eventually started it up again and managed to finish it. I went to Nick’s studio with the vocal bit and then we threw it all together.

Sub Focus: We were on tour in New Zealand, it was New Year and we ended up doing some work for it, on tour on the plane, so we knew we wanted to get something finished pretty quickly. We were on the plane playing around with ideas and managed to spin it in New Zealand for our first play to test it out in early stages. We’ve know each other for years though through touring and being on the same label as well.

Q6. I think your latest track ‘Take It Up’ is brilliant! Is there much meaning behind the track for you both? And should we be expecting more music from this collaboration again?

Sub Focus: Yeah, there’s something about the lyric. We’re talking about getting together to join the scene together a little bit and I like the way the lyric refers to that, and taking it to new heights. I think that track is a great mix of both of our styles.

Wilkinson: You can say a lot in a song, but it’s harder to say a lot in a hook like that. I think you can relate that to a lot of things at the moment, it’s got that sort of feel good energy. We wanted to do something melodic. There’s a lot of weight on our shoulders for collaboration between us, it’s a big expectation.

Wilkinson: I know this has been said a lot, but when I’m relaxing I don’t really listen to drum and bass. I listen to it if I’m going on a run or going through a lot of new stuff that I have to listen to. In my spare time I tend to like more of a chilled out environment.

Sub Focus: Yeah I’m the same man, a lot of Jon Hopkins and Biceps for example. I listen to a lot of house music, almost slightly classical inspired electronic stuff. We both try to take influences from outside of drum and bass.

Q8. For anyone who hasn’t heard of RAM records, tell us a bit about it and the involvement of Wilkinson and Sub Focus.

Sub Focus: So I started working with RAM records quite a long time ago now, about 15 years ago, my friends gave Andy C who runs RAM records a demo and we started working there. It’s been an amazing experience to be basically mentored by one of the original people that started the drum and bass movement. He’s a great person to be involved with.

Wilkinson: Scientific actually gave Andy a CD with a load of my tunes on, he played them when he was on the way to a gig in Newcastle and messaged me in the middle of the night to say I had to come down to meet him soon. That label started the careers of some of the top drum and bass DJs like Chase and Status. Andy C is still going hard, he does gigs every weekend and he’s always good to get feedback from.

Sub Focus: I’m working on a nice body of music at the moment and I want to get that out soon, touring a bunch in the summer. We’re both doing a residency at ‘Amnesia’, we’re both hitting a bunch of festivals as well.

Wilkinson: I’m doing the same really, just making a lot of tunes and Djing pretty much every weekend.

Listen to Wilkinson and Sub Focus’ track ‘Take It Up‘