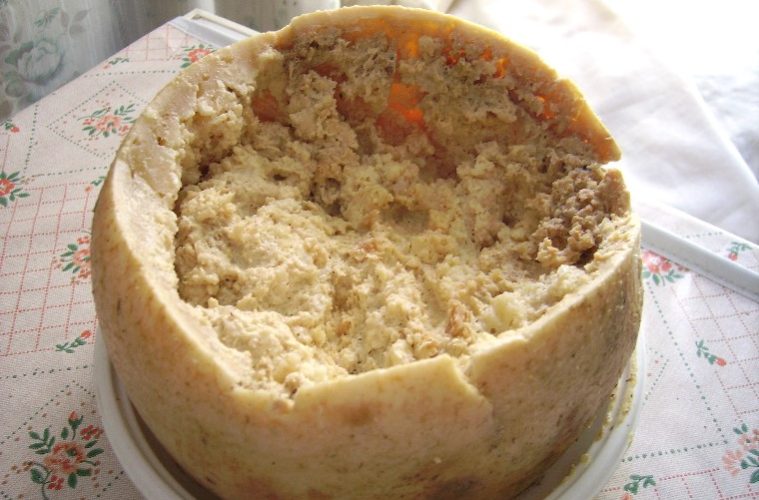 Would You Eat Sardinia’s Maggot Cheese?

There are many weird and wonderful dishes from all over the world; duck fetus (Balut), fried tarantula, and even cobra hearts – but Sardinia has society divided over its infamous Casu Marzu, or more commonly known as maggot cheese. And it’s stronger than any blue cheese you’ve ever encountered.

This rather funky smelling delicacy is a traditional Sardinian sheep’s milk cheese that is quite literally putrid and rotten. This unusual dairy product contains live insect larvae (maggots) which takes the cheese one step higher than fermentation; decomposition.

These maggots are deliberately exposed to the cheese, and the digestive action carried out by them results in the fat within the cheese being broken down. This is an advance level of fermentation that leaves the cheese soft and gooey with liquid (known as lagrima, which is Sardinian for ‘teardrop’) seeping out of the sides. The maggots themselves are translucent, about 8mm long, and come from the cheese fly Piophila – some people like to clear their cheese of the larvae before consuming, while others believe that eating them is the traditional way of enjoying the cheese. When the cheese is fully “putrid” and decomposed, it is cut into very thin slices and spread onto moist Sardinian flatbread.

Maggot Cheese is actually considered unsafe to eat if the maggots are dead, unless of course the cheese has been refrigerated, which can kill the maggots. Oddly, when these larvae are frightened or disturbed, they can actually launch themselves up to 15cm. Hence why you might see some people holding a hand above their cheese as they eat it, to prevent flying maggots! Consumption of the larvae has resulted in a condition called pseudomyiasis, as it is possible for them to survive in the intestine.

Due to hygiene regulations, the dairy delicacy has been outlawed in Europe, however, some Sardinians made it available on the black market where it can be sold for large amounts of money…