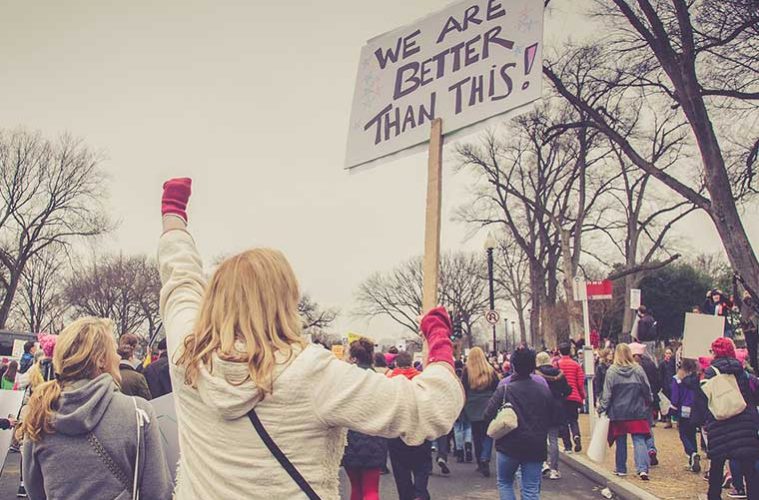 History or hysteria? Famous protests that have changed history

Eurovision has been the subject of social media discussion over the last few days. First, Rylan Clark-Neal pulled out of Eurovision “due to unforeseen circumstances” last week: it’s not yet clear whether these circumstances were family emergency or PR stunt, but there are people who remain interested.

During the final, SuRie’s performance of Storm, was interrupted by a man running onto the stage. He grabbed her microphone and appeared to say “Nazis of the UK media, we demand freedom.” His freedom was swiftly curtailed when he was dragged off stage. SuRie continued her performance, ultimately finishing third from bottom in the scores. The UK will not be hosting the next competition.

While this minor protest may be a topic of discussion for a while, it’s unlikely to warrant more than a footnote on Wiki.

We look at four famous protests that have had a profound effect on the course of history.

Tank Man is the name given to the unidentified man who temporarily stopped the advance of a column of four tanks in Beijing in June 1989. The image of the man standing in front of the tanks was captured  by Jeff Widener of the Associated Press and is widely recognised.

The morning after the Chinese military suppressed the Tiananmen Square protests by force, the man repeatedly shifted his position to obstruct the tanks attempts to move around him. Little is known about the man and his fate, and theories range from having escaped to Taiwan to having been executed by firing squad. The government claims not to know too.

The suffragette was fatally injured by Anmer, the royal racehorse, at Epsom racecourse during the 1913 Derby. Long an emblem of the suffragette movement, Ms Davison has been saluted by some as a martyr and attacked by others as an irresponsible anarchist.

Modern theories are that, rather than grabbing the bridle of the horse to pull it down, Ms Davison may have been reaching up to attach a scarf, suggesting that she did not run out recklessly to kill herself for the cause.

After the collision, Ms Davison collapsed unconscious, dying four days later of her injuries in Epsom and it is not clear whether her actions summed up the desperation of women who wanted the right to vote, or whether this was just a tragic accident,

Rosa Louise McCauley Parks was a civil rights movement activist and best known for her part in the Montgomery Bus Boycott.

On 1 December 1955, she refused the order to give up her seat in the “coloured section” of a bus to a white passenger. Arrested for civil disobedience in violating Alabama segregation laws, she became an international icon of resistance to racial segregation. She suffered for her defiance however: she was fired from her job in a local department store and received death threats for years afterwards.

Rosa Parks was awarded the Presidential Medal of Freedom, the Congressional Gold Medal, in 2005, President George W Bush issued a proclamation ordering that all flags on US public areas within the USA and abroad be flown at half-staff on the day of her funeral. She is known as the “mother of the civil rights movement”, and her actions sparked a movement for racial equality.

John and his wife Yoko held two week-long Bed-Ins for Peace in 1969,while the Vietnam War raged. Based on a sit-in protest, each was a non-violent protest against war and part of the bed-ins were filmed.

These bed-ins are recorded in popular history including a reference to the Oasis song “Don’t Look Back in Anger” with the lyrics “I’m gonna start a revolution from my bed”.

In December of the same year, John and Yoko spread their messages of peace with billboards reading “WAR IS OVER! If You Want It – Happy Christmas From John and Yoko”.

In 2010, the city of Montreal unveiled a commemorative artwork in Mount Royal Park entitled Give Peace a Chance. It features the same words in 40 languages.