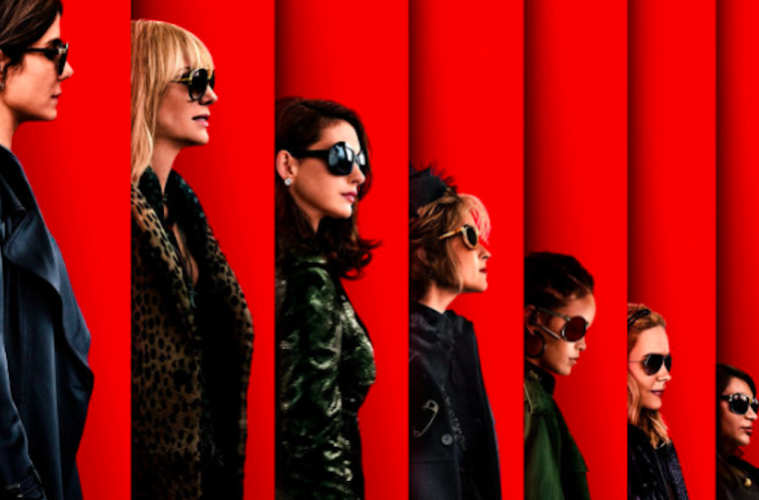 In public life, men get noticed. Women don’t. And, for once, Sandra Bullock’s Debbie Ocean is fine with that. Debbie is the sister of Danny Ocean, George Clooney’s ultimate heist-puller who delighted audiences in Ocean’s Eleven which was released back in 2001. Two other films followed (although none matched the ingenuity of the first) and now we have Ocean’s Eight, a spin-off in which Bullock leads a female gang of crooks to conduct a heist of which her brother would have been proud. This all-female crime caper certainly has its fun moments and is carried by its brilliant ensemble cast, but those looking for the twists and turns of the original film will be left feeling short-changed.

I just saw the delightful Oceans Eight and I want to do a heist with some ladies. Who would be interested in stealing America?

Opening in the same way as Eleven, Ocean’s Eight introduces us to a member of the Ocean family as they lie their way through a prison parole hearing, promising that they are a reformed and honest character. Of course, this is all nonsense, and this time it’s Debbie Ocean who has had plenty of time in prison to plan the perfect large-scale robbery. Instead of casinos, Debbie has her sights set on New York’s Met Gala and, in particular, the theft of a $150 million Cartier diamond necklace. Unable to pull-off such an audacious theft on her own, Debbie needs to assemble a crack team to help her, and first reunites with her former partner Lou (played by Cate Blanchett) who wants bigger criminal rewards than she can get from selling watered-down vodka.

Ocean’s Eight is legit one of the best movies I’ve ever watched!!

The successes of Ocean’s Eight are largely down to this ensemble cast. Bullock is a brilliant lead (equalling, if not surpassing, Clooney’s criminal charisma), her felonious credentials introduced to us as she manages to make a department store assistant give her a shopping bag in which to put her stolen perfumes. Blanchett, too, puts in a magnetic performance and looks super-cool as she swaggers across the screen in an array of biker outfits. Indeed, the costume design for the film is brilliant (as you’d expect from a film centred on one of the biggest fashion events in America). Debbie and Lou need a way into the Gala, and get a money-strapped fashion designer (comedically played by Helena Bonham Carter with a questionable Irish accent) onboard to convince the arrogant actress and co-host of the Gala Daphne Kluger (Anne Hathaway) to wear the Cartier necklace on the night.

Anne Hathaway shines in a self-deprecating performance as the superficial Kluger and puts in one of the best performances of the film. The other cast members also have fun with their roles: Rihanna stars as a joint-smoking hacker; Mindy Kaling plays a jewellery expert with a quick hand to break down the necklace into individual stones; rapper and actress Awkwafina plays a pickpocket and street hustler; Sarah Paulson gives a good performance as the fence and only mother in the gang, juggling the responsibilities of family life with her criminal activities as she explains away her garage-full of stolen goods to her husband as “eBay”; and supporting roles from Richard Armitage as Debbie’s ex-lover and from James Corden as a fraud investigator do a good enough job.

Part of the enjoyment to be derived from these type of films is the audience’s familiarity with the tropes of the genre: the planning sequences, the burger/surveillance vans, the introduction of the technology and the security systems which must be beaten are familiar but no less enjoyable. And the first half of the film does this well, even if the script (written by director Gary Ross and Olivia Milch) feels a little under-developed at times. This is a shame, given the star cast who could have done so much more had they been given more character depth and more tightly-honed dialogue. As things stand, Bullock and Blanchett do enough, but never get a chance to push their characters beyond their respective roles within the gang.

the thing about ocean's 8 is that literally no one steals the spotlight. everyone gets their own screentime, alone. it isn't just about debbie or lou or daphne. It really IS about the EIGHT (8) women.

The actual crime itself is ingenious enough but things never fizz with pure excitement or provide any genuine thrills as the problems which the gang encounter are quickly resolved without sustaining any tension. The whole film ticks along at an economic pace but it relies too heavily on the good will of its cast, some pretty frocks and celebrity cameos to provide the narrative engagement. Perhaps this is down to the creative team behind the film who fail to match Steven Soderbergh’s original (Soderbergh is, however, a producer this time round) and simply tick genre boxes with little flair.

As summer escapism, Ocean’s Eight works perfectly well but it does feel like a missed opportunity. With such a great assemblage of actresses, the heist could have been a breath-taking and comedic gem. Despite diamonds being the target of Ocean’s efforts, the film never truly sparkles.