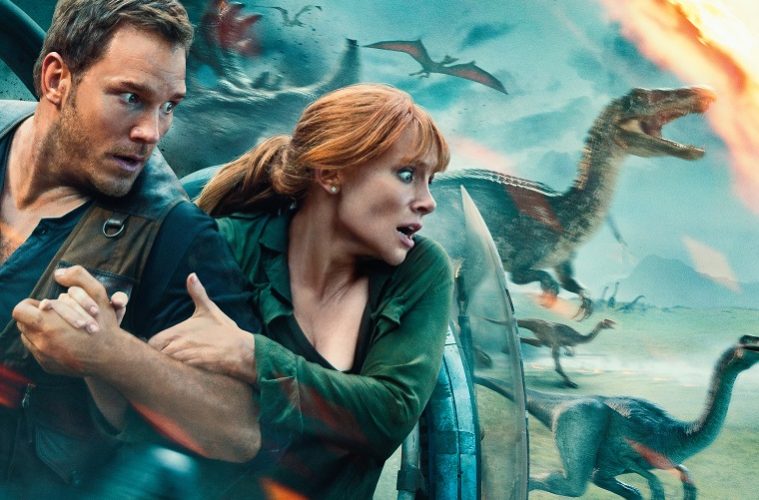 The old adage “those who do not learn from history are doomed to repeat it” seems remarkably apt when it comes to the plot for Jurassic World: Fallen Kingdom. Either that, or the characters are just a load of idiots. Having narrowly avoided the deaths of thousands in the previous film when the dinosaurs escaped from their enclosures at the Jurassic World theme park, velociraptor trainer Owen Grady (Chris Pratt) and dinosaur activist Claire Dearing (Bryce Dallas Howard) decide it would be a great idea to return to the island. This time, it’s a rescue mission: the island is about to be destroyed by a cataclysmic volcanic eruption and the race is on to save the dinosaurs from a second extinction. Obviously, lessons haven’t been learnt.

In 1993, Jurassic Park was a summer blockbuster that changed the game. Jurassic World: Fallen Kingdom is the Jurassic Park sequel that I have been waiting 25 years for. The film builds on the original while making the story modern. It is everything that I hoped for in a sequel.

2015’s Jurassic World was a fun return to the dino-chaos of Steven Spielberg’s Jurassic Park (which, amazingly, was released way back in 1993) and, along with some brilliant special effects, offered some surprisingly cutting comments on the nature of consumerism and animal exploitation. Oh, and there was heel-gate. The latest film continues the impressive visuals (the opening sequence is a gripping re-introduction to the huge Mosasaurus aquatic lizard which captivated audiences in Jurassic World). It also raises more ethical and moral dilemmas but, unfortunately, fails to engage with them on any satisfactory level, and the initial marvel of cinematic dinosaurs has long worn off. The result is a watchable film which ticks along nicely without soaring to the exciting heights of the original.

Jurassic World: Fallen Kingdom is directed by Spanish director J. A. Bayona (an admirer and mentee of Guillermo Del Toro), who introduces a palpable sense of gloom to proceedings. Indeed, there are several nods to his previous work: a lighthouse motif references his 2007 horror film The Orphanage and the large-scale destruction sequences are reminiscent of his Boxing Day tsunami drama The Impossible. Fallen Kingdom, however never quite manages to fuse an auteur sensibility with blockbuster action, hovering indeterminably somewhere in between.

If you fancy seeing Jurassic World: Fallen Kingdom, save yourself some money and watch the trailers at home, because the whole story and all the money shots are in those. Absolutely bizarre marketing.

Claire and Owen believe they are helping to rescue the dinosaurs from the imploding island and transfer them to a new sanctuary funded by Sir Benjamin Lockwood (James Cromwell), the partner of John Hammond (who was, of course, played by the inimitable Richard Attenborough) who created the original dinosaur cloning technology. Sir Benjamin’s money-driven assistant (Rafe Spall) is masterminding proceedings, however, and is intent on exploiting the rescue mission for financial gain. The dinosaurs are not the only threat, it would seem, and alongside the usual mercenaries employed to capture the velociraptors and stegosaurus, Toby Jones plays a sinister auctioneer who delights in selling creatures for million-dollar sums.

Bryce Dallas Howard and Chris Pratt make for a very watchable pair of protagonists, even if hers is a character who could do with a little more development and agency. That said, she is a strong presence, and Pratt undertakes his role in good humour. A cameo from Jeff Goldblum at the beginning and end of the film will please fans, and he acts as the film’s moral compass – even if the needle skirts around the weightier ethical issues it references. In terms of performances, however, a special mention should go to newcomer Isabella Sermon who plays Maisie, the granddaughter of Sir Benjamin. She gives a fantastic performance, especially in the emotional moments of the film which centre on familial loss and the genuine terror of being chased by a dinosaur. The scene when she meets Claire and Owen for the first time is particularly great.

Jurassic World: Fallen Kingdom, for me, is easily the best Jurassic movie since the original.

Some parts of the story are a bit goofy but it's directed so brilliantly that I sort of forgive it. Every sequence is so tense! It's essentially a haunted house movie with dinosaurs! pic.twitter.com/39EaMILxeT

The first half of the film’s action takes place on the doomed island and, as dinosaurs flee alongside their human counterparts from flying ash and searing lava flows, the cinematography is impressive. Later in the film, as a fearsome and newly-created dinosaur called the Indoraptor chases Maisie as she takes refuge in her bedroom, a swirling and rotating camera makes for brilliant viewing as it tracks the creature scaling the side of Lockwood’s mansion. Although this sequence, along with a few others, is visually-arresting and compelling, the overall feel of Jurassic World: Fallen Kingdom is a little weary. The previous 4 films have essentially worked through every possible dino-encounter scenario and, therefore, the action in this film feels too familiar to have any deep impact on audiences.

That’s not to say that there’s anything wrong with the drama, performances, or special effects: there isn’t. But without a solid engagement with the moral issues which come with resurrecting a distinct species, there is little sense of wonder to add to the Jurassic canon. At one point, Claire asks Owen “can you remember the first time you saw a dinosaur?”. Audiences will be able to and, unfortunately, they will be left feeling that the whole thing has become a little trite. Now there’s something I never thought I’d say about dinosaurs.