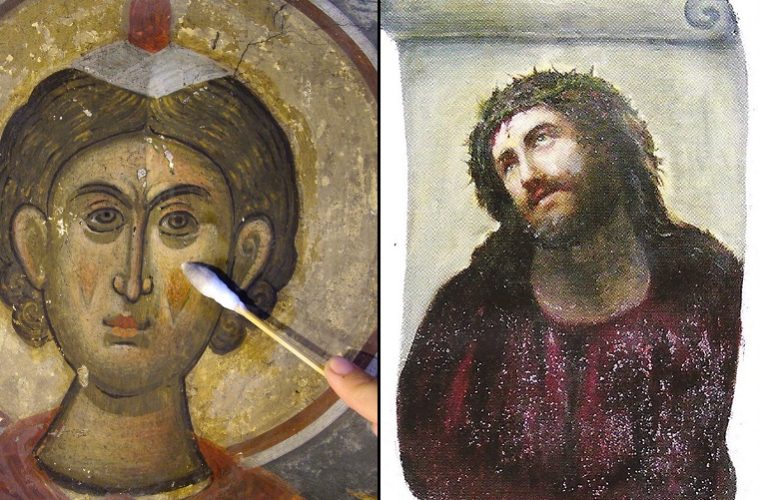 The world of art erupted last night following the unveiling of a restored 16th century statue.

This is no sympathetic restoration: the recently repainted wooden sculpture is being compared to the infamous 2012 Ecce Homo restoration. And once again, people aren’t happy.

Religion has a heritage of centuries-old history, and art and architecture are merged in churches and buildings across Europe.

The changes made to the 16th century statue of St George (San Jorge) in the Church of St Michael in Estella in the Navarre region have provoked anger among art experts. The statue, which portrays St George charging the dragon, was dark brown with age. After the restoration, photos emerged showing George sporting a ruddy complexion and wearing a flashy red and grey armour.

Estella’s mayor is furious. Koldo Leoz tweeted: “Today Estella doesn’t make news for its spectacular historical, artistic, architectural or cultural heritage, but because of miserable actions performed on a 16th-century St George statue that is in one of the most imposing religious temples of the city.”

The mayor said the church’s priest had decided to renovate the carving without consulting or informing the city council, “something he should have done by law“, saying that the priest had hired “an academy of crafts” instead of trained professionals, to perform the restoration.

Here are some of the best examples of the worst restorations in history.

Michelangelo’s Sistine Chapel is the site of one of the most extensive restorations of the 20th century. However, when the soot was cleared from the chapel’s upper reaches, so were some of Michelangelo’s corrections to his work – the result, some of the characters lost their eyes.

Every Russian city has a Lenin statue commemorating  the leader of the world proletariat. But the one in Krasnodar Krai in southern Russia was unlucky. After its restoration, it acquired a disproportionately long hand and someone else’s face. It underwent a makeover shortly after the story circulated in 2016.

The Great Wall of China is the largest architectural monument on Earth, allegedly able to be seen from space (you can’t) and, unfortunately, slowly decaying. It’s a series of fortifications dating as far back as 220 BC and measures more than 21,000km. In 2014, restorers reconstructed one of the most beautiful sections of the 780-meter-long wall, near the border of Liaoning and Hebei province, simply covering it with a layer of concrete. Restoration of the rest of the wall will be carried out more carefully.

Also in 2014, an employee of the Cairo Museum dropped the priceless 30-pound golden mask of Tutankhamun – the beard broke off. Instead of asking professionals for help, the woman turned to her restorer husband, who stuck the beard on with superglue. He chose the wrong angle and then stained Tut’s chin with glue which he tried to scrape off, leaving scratches. The mask has since been restored properly.

When a sculpture of the Virgin Mary and baby Jesus was subject to decapitation of the infant in Sudbury Canada, artist Heather Wise volunteered to make a new head. It didn’t look a thing like the original.

But perhaps the most famous of all unsuccessful art restorations has to be the 2012 Ecce Homo (Behold the Man) incident. 80-year-old Cecilia Jimenez volunteered to restore a 1930 fresco of Jesus in a Spanish cathedral in Borja. The restoration of the original work by Cecilia’s work has spoiled the fresco, which is now known as Ecco Monkey, but the cathedral is now known worldwide, and Cecilia is called the new Goya. So perhaps not that unsuccessful a restoration after all!